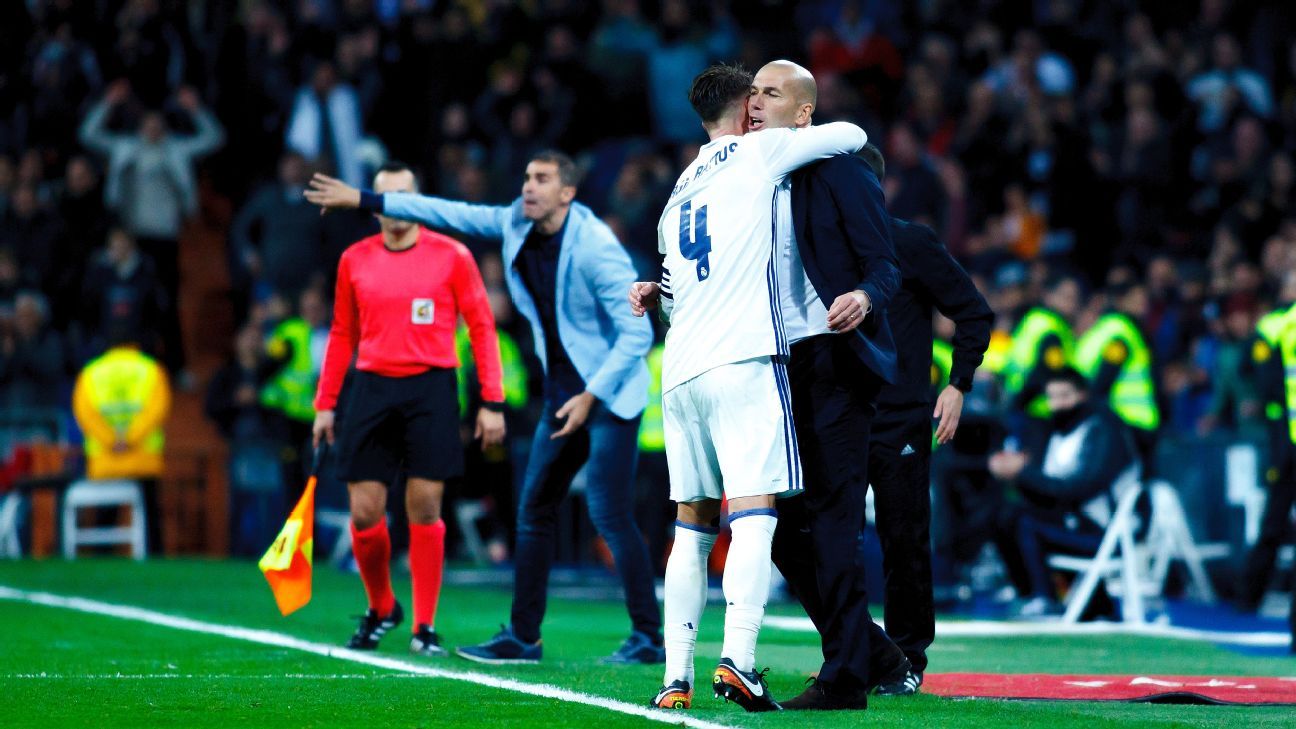 Real Madrid coach Zinedine Zidane is doing all he can to convince club captain Sergio Ramos to remain at the club, Marca reports.

A source within the club told ESPN’s Paola Nunez last week that Ramos is contemplating a move after 14 years at the Bernabeu.

In that spell, the Spain centre-back has played a pivotal role in some extraordinary success with four Champions League triumphs (including three in row between 2016-2018) and four La Liga titles.

Ramos, 33, is under contract through 2021 for more than €12 million per year after renewing in 2017. However, he is considering a move to another top European club, with reports claiming both Manchester United and Paris Saint-Germain have asked about his availability in the recent past.

Marca reports that Zidane still sees Ramos as a vital member of his squad, as much for his leadership as his ability, and that the defender is due to meet with club president Florentino Perez when he returns from a postseason break in the United States.

The Premier League champions, who are under investigation from UEFA over a potential breach of Financial Fair Play rules, have spent more than £1 billion on players since they were bought by Sheikh Mansour in 2008.

Speaking at the Financial Times’ Business of Football summit on Tuesday, Tebas criticised the ownership models of City and French champions Paris Saint-Germain saying they caused an imbalance that is stretching football to its economic limits.

“He talks about how we distorted the market? There is a hypocrisy in this statement that is ironic,” Al Mubarak said. “Number one, let’s look at the Spanish league, the time of breaking records on player acquisitions, I mean, who started that?

“And then you look back at transfers. In the top ten transfers of all time, Manchester City has not a single player in that, not a single one.”

Manchester City are keen on snapping up Youri Tielemans, who has shone on loan at Leiceter from Monaco this season.

The King Power hierarchy are desperate to crown his good form by making his switch to Leicester permanent but given the impact he has had, it’s no surprise to hear that they may face some serious competition for his signature.

He was particularly impressive in Leicester’s narrow 1-0 defeat to City at the tail-end of the season, and The Sun report that Pep Guardiola has seen more than enough to persuade him  that the former Anderlecht player would be an invaluable addition to his Etihad squad.

Tielemans was hugely impressive alongside James Maddison under new man Brendan Rodgers as the season drew to a close.

But City representatives have apparently already been in touch with the Belgian’s representatives about the move. And when the Treble winners come calling these days, it’s never easy to say no.

West Ham is expected to bid £18 million for Barcelona midfielder Andre Gomes, who spent last season on loan at Everton.  According to The Times, Everton would like to retain Gomes, but no preferential option to buy the midfielder was included in last summer’s single-season loan deal.

Now it seems Manuel Pellegrini’s side would like to make a permanent move for the Portugal international. The 25-year-old is under contract at Barcelona until 2021, at around twice the price that the Hammers are now looking to shell out.

Manchester United will flog Marcos Rojo to whoever is prepared to shell out £6m on the misfiring Argentinian defender.

Rojo’s spell at Old Trafford has been dogged by injury and now the 29-year-old is on the market this summer having played just six matches for United last season — and only 12 the campaign before.

United boss Ole Gunnar Solskjaer is desperate to revamp his squad in the next couple of months and getting players like Rojo off the wage bill is a key part of that process. Now the Mirror are reporting that United have named their asking price. With his price tag designed to encourage as much interest as possible. Whether anyone bites, meanwhile, is a different matter entirely.

– Eintracht Frankfurt star Luka Jovic has handed Chelsea some long-overdue good news, with the striker suggesting that he might be “better suited” to life in the Premier League, according to Marca. Jovic had been expected to complete a move to Real Madrid, but Los Blancos interest in the 21-year-old has cooled as a result of the German club upping the asking price for a prodigy who has scored 27 goals for the Europa League semifinalists.

– PSG boss Thomas Tuchal has told Sky Sports News that he can’t promise Neymar and Kylian Mbappe will be with the club next season. His comments, repeated by The Sun, suggest that he has no idea if either will be with the club next season, backing up quotes TT reported last week .”My wish is clear, but I can’t promise as that would be naive and I don’t want to be naive in this business,” he said.