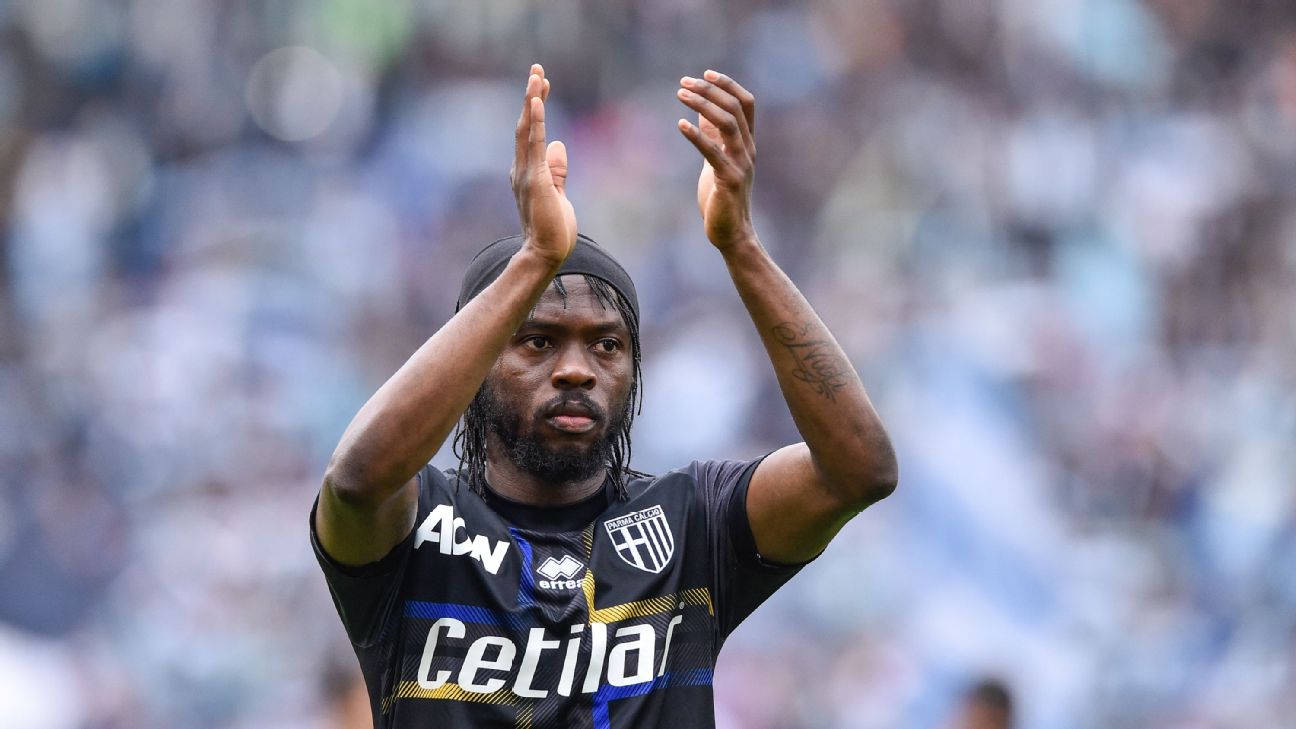 As Parma close their Series A season against AS Roma on Sunday, most eyes will be on Daniele de Rossi as he plays his final game for the club after 18 years there. But Ivory Coast’s Gervinho could well steal a few glances, having helped Parma avoid the drop.

Gervinho’s renaissance at Parma this season has been as joyous as it was unexpected, and he may yet end his international career on a high when the Ivory Coast contest the Africa Cup of Nations next month.

The former Arsenal wideman is no stranger to failure, having become something of a figure of fun during his time in England, as his confidence and form dissipated.

Gervinho – one of football’s more sensitive personalities – has always played with his heart on his sleeve, and has made no secret of the impact that the sport’s tension can have on him.

He frankly admitted to journalists, after the Ivorians’ dramatic penalty shootout victory against Ghana in the final of the 2015 Afcon, that he simply couldn’t bear to watch the action unfolding. He positioned himself on a plastic chair, behind the Elephants’ dugout, facing away from the pitch and towards the stands.

“At two-nil down, I took my seat and I turned my back on the game,” he conceded after the match. “It was stressful, it was hard to watch, because penalties are luck.

“I was stressed, I had so many bad ideas in my head.”

Moments like this have risked overshadowing – and detracting from – one of the most exciting African talents of his generation.

Nicolas Pepe’s sensational form for Gervinho’s alma mater LOSC Lille this season has brought back memories of the veteran’s own impact in Northern France early in his career, where he was part of the side that secured an unlikely Ligue 1 title success in 2011.

He played a part in 24 goals that term, ending the season fifth in the assist charts – tied with teammate Eden Hazard – and joint seventh in the scoring charts.

Gervinho duly made the Ligue 1 Team of the Season, and soon, Arsenal came calling, snaring the then-24-year-old for £10.8 million.

Initially, Gervinho’s pace, movement and footwork proved to be menacing prospects for Premier League defences, and after being sent off on his debut against Newcastle United, he shone during those opening months before departing for the 2012 Afcon.

However, like too many other Arsene Wenger signings of the era — like Marouane Chamakh, like Andrey Arshavin, like Denilson — early promise turned to ultimate disappointment, as Gervinho’s momentum slipped away, the decisive impacts became fewer and further between… and then the playing minutes did too.

“Some players struggle in other countries, and you can’t always explain it.

“Many players go to different countries and don’t succeed; maybe the timing wasn’t right, there are many different elements at play in determining how things go.

“There are some countries where it’s easy to succeed, and others where it’s not. Some guys can succeed in England but can’t in Spain, while some struggle in England then become a phenomenon in Spain.

“[In England] the football is very demanding at a very high level, but you can’t dwell on failure, you have to go and bounce back somewhere else.”

Gervinho went and did exactly that… although it wouldn’t be the last time that he’d be written off.

It took a move to AS Roma, and a reunion with his former Lille boss Rudi Garcia, to reignite the forward’s career.

As part of an attacking line alongside Mattia Destro, Francesco Totti and Adem Ljajic, the West African returned to form in some style in the 2013-14 season, scoring 12 as Roma finished second in Serie A.

“If Gervinho could finish then he would be like Cristiano Ronaldo and Roma would never have been able to sign him,” Totti said – as something of a bizarre compliment – in 2014.

He netted seven the season after, and had already matched that return — in a remodelled forward line alongside Mohamed Salah — by the time he departed the club in January 2016.

Internationally, he also hit his peak in 2015, scoring in the quarter and semifinals of the Afcon en route to the title.

Once again, the obituaries for his career were being written following a move to Chinese side Hebei China Fortune – an early step away from Europe’s major leagues for a player of 28 – and things went from bad to worse when he ruptured his knee ligaments in October 2016.

The setback would cost him an appearance at the 2017 Afcon, where Michel Dussuyer’s charges fell at the first hurdle, and it was eight months before he returned for the conclusion of the national side’s ill-fated World Cup qualifying campaign.

However, as Gervinho proved yet again, after securing an unlikely move back to Serie A with Parma in August 2018, it was premature to write him off.

The 31-year-old – not lacking any of the technique, agility or suppleness of his youth – has been a revelation in the Italian top flight this term.

Despite Parma’s battle against the drop, he’s been one of the division’s most eye-catching attacking talents, scoring 10 and contributing two assists, despite his campaign being punctured by injury problems.

He’s averaged 2.2 dribbles per game – the joint fifth best in the division – and scored one of the goals of the season against Cagliari in November, picking up the ball outside his own penalty area, slaloming past a series of despairing challenges, running 70 yards and firing home a right-footed effort off the post.

If it wasn’t quite the greatest goal scored by an African player in the Italian top flight, it certainly prompted more than a comparison or two with George Weah’s fabled wondergoal against Verona in 1996.

After Sunday’s finale, Gervinho’s season is likely not over, provided he is in the yet-unnamed Afcon squad.

New coach Ibrahim Kamara, appointed last July, is yet to use the forward, and he’s certainly not short of game-changers, with Pepe, Wilfried Zaha, Max-Alain Gradel, Jonathan Kodjia, Jean Seri and Maxwel Cornet just some of his options.

However, Akalé believes that the attacker’s form in Italy – and his experience – should ensure he’s on the plane to Egypt.

“We can’t leave him at home, it’s impossible,” the former Olympique de Marseille midfielder said. “I don’t know why he wasn’t chosen [before], maybe the coach stuck with the players he knew, those who played in the qualifiers.

“Maybe he wanted to look at some new players, [but] I still have the conviction that he’ll be called up.

“Gervinho is among the most experienced players, having played the most international matches, and if he’s called, he’ll boost our attack. He can contribute a lot to the young players.

“Those who haven’t played at the Afcon before will find it to be a special [tournament]. It’s different from playing in Europe in many ways.

“The intensity is different, the temperature plays a role, it isn’t the same. [He] will know how to speak to the young ones, and help them progress.”

“Gervinho knows these situations well,” the 2015 Afcon hero told ESPN. “His experience could be useful at the heart of the team.

“However, we must have confidence in the selections, who will make their choices.

“It’s important [also] to let this new generation earn their stripes. Believe in them, because they’re passionate, and want to win.”

Even at 31, Gervinho’s pace, movement and form could make him an asset for the Ivorians on the pitch in Egypt, while his experience could make him a valuable addition to the squad off the field as well.

His longstanding absence from the national team, and the apparent reticence of Kamara to use him, count against the forward, but as he’s demonstrated before, time and again, you write him off at your peril.