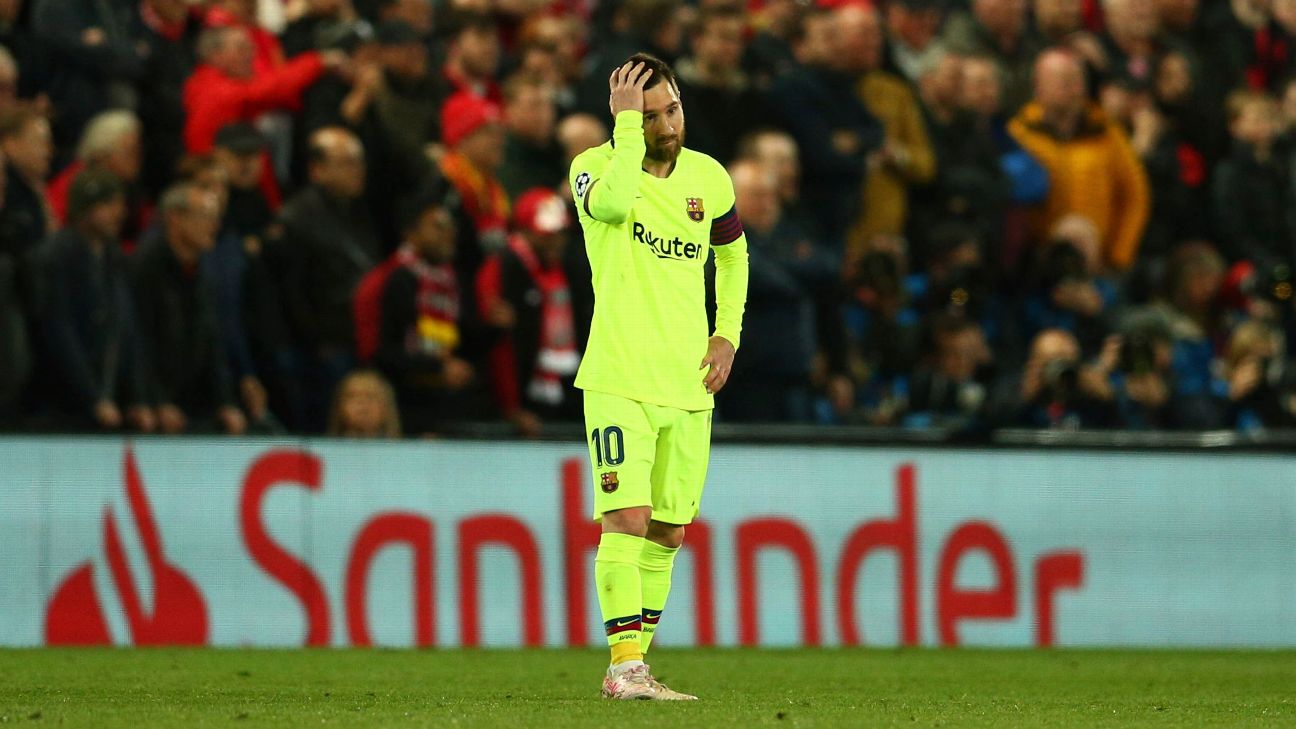 BARCELONA, Spain — Lionel Messi has backed Ernesto Valverde to continue as Barcelona coach despite the Champions League humiliation against Liverpool and says the players should take the blame for what happened at Anfield.

Messi, giving his first news conference as a Barca player in four years, said the loss at Liverpool was as tough to take as losing the World Cup final with Argentina in 2014. He called the performance “lamentable” and apologised to the club’s supporters for failing to compete against Jurgen Klopp’s side.

Despite that defeat clouding Barca’s season, the Spanish champions could still end the year with a domestic double if they beat Valencia in the Copa del Rey final on Saturday in Seville. Messi called on everyone to be united as they look to end the campaign on a high note.

“It was a huge blow which we received at Anfield — me and all the dressing room felt it,” he said. “It was tough to get back up. I think you saw that in the next game we had to play [against Getafe].

“The image of the team was lamentable, it’s left a huge stain [on the season]. It can happen once [against Roma last year] but it should never happen in back-to-back years, not when you have the chance to be in a European final.

Messi was clear that under-fire Valverde, who has already been backed by president Josep Maria Bartomeu, should remain in his post despite a second successive humiliation in Europe.

“I haven’t seen much of the criticism of the manager but I honestly think he has done an impressive job since he’s been here,” the Barca captain added. “He was hardly to blame for anything against Liverpool. We, as the players, are to blame. We couldn’t let what happened the year before against Roma happen.”

Messi’s career has been full of trophies — collectively and individually — but there have also been some low moments. He was part of the Argentina side which lost the World Cup final to Germany in 2014 and he says the Anfield defeat has been just as hard to deal with.

“They’re different things,” he said. “The World Cup final is the biggest game there is and it’s a huge disappointment to lose it. But it’s another thing to go into a game with a 3-0 lead and see it overturned. They’re both huge blows. I think this one is a little more exaggerated because we had the advantage. You don’t expect it.”

Extra emphasis had been placed on Barca’s Champions League campaign because of Messi’s preseason pledge to bring it back to supporters. In a speech before a friendly against Boca Juniors at Camp Nou, he told fans the players would do everything they could to bring the trophy back to Catalonia.

“I don’t regret the speech,” he said. “I didn’t promise to bring ‘that beautiful and desired cup’ back, I promised to do everything to try and bring it back. But we didn’t do that, so we should say sorry for that because we didn’t even compete in the second half at Anfield.”

Defender Gerard Pique added that it was one of the “worst” nights of his career but credited Liverpool for preventing Barca playing their usual football.

“It was one of the worst experiences as a professional player,” he said in a news conference. “We tried to play Barcelona’s style, sometimes it’s easier, sometimes it’s difficult. This is the idea from the coach to the players.

“But it’s not just what we want, sometimes the other team plays, sometimes you have different players or players that maybe are more comfortable playing another kind of game. At the end of the day, a lot of circumstances that make you play one way or another way.

“The wish is to play Barcelona’s style, what we learned here in La Masia. But there are times, like at Anfield, when it’s not possible to have all of the ball. That’s one of the reasons why we lost.”