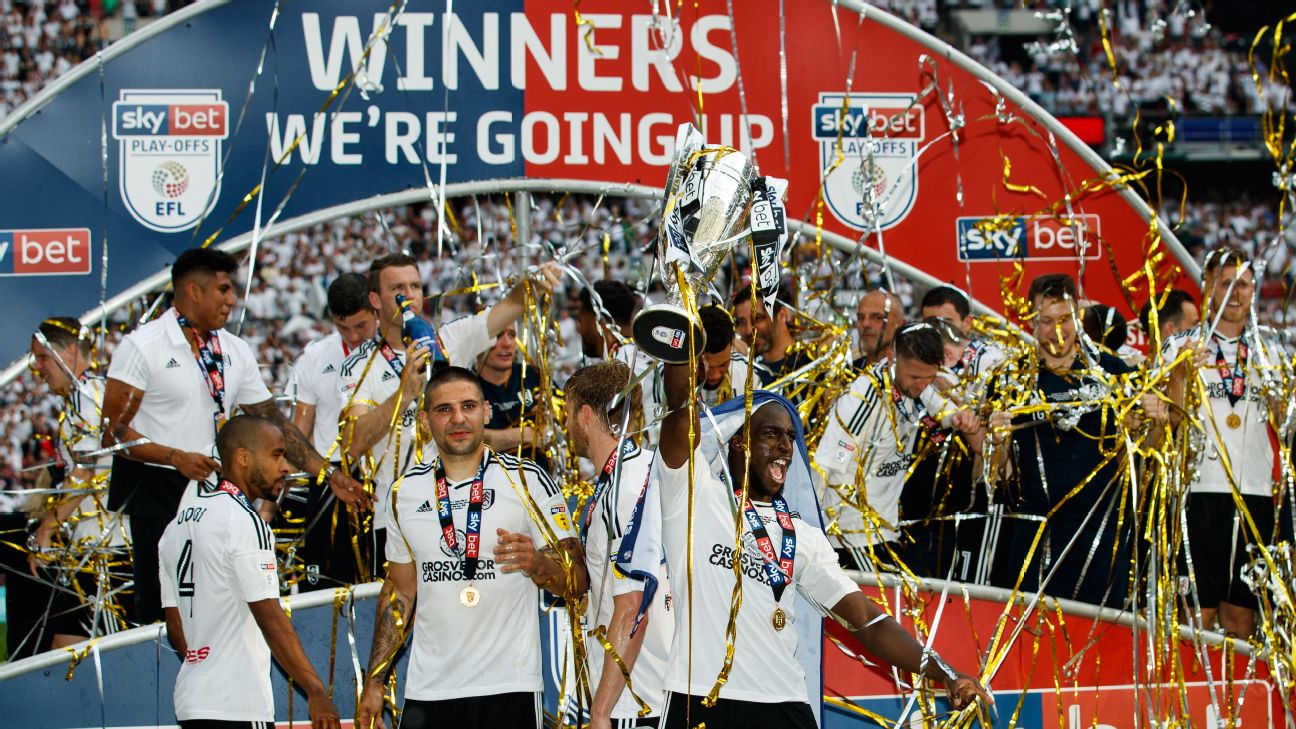 It is the most lucrative one-off fixture in the sporting world, with the financial windfall for the winning team a staggering £170 million — three times more than the combined value of winning the Champions League, Premier League and FA Cup. The monetary jackpot vastly overshadows that which comes with winning the Super Bowl ($6.25m), NBA Finals ($3.3m) or World Series ($30.4m), but the flip side of the EFL Championship playoff is that the losers not only end up with nothing, they also see the door to the riches of the Premier League slam shut in their face.

On Monday, Aston Villa will play Derby County at Wembley (live on ESPN+ at 9:55 a.m.) for the glory of winning the richest game in team sport.

Villa, relegated from the Premier League in 2016, were beaten by Fulham in last season’s final, while Derby, who lost to Queen’s Park Rangers in the 2014 final, are attempting to return to the top division for the first time since 2008. They are two of English football’s best-supported clubs; Villa’s average home crowd this season (36,029) was the 10th highest in the country, while Derby’s average of 26,850 was higher than six Premier League teams. And Villa have won more league titles and cups than Manchester City — and lifted a European Cup in 1982.

There’s also an intriguing subplot for the pair: two former Chelsea teammates and legends will be in opposite dugouts on Monday. Frank Lampard is the manager of Derby, while John Terry is Dean Smith’s assistant at Villa. The pair won four Premier Leagues together at Stamford Bridge, along with four FA Cups, two League Cups, the Champions League and Europa League.

But only one of them will secure a passport back to the Premier League on Monday. The losers get nothing more than heartache and the prospect of another season in the second tier, with fixtures against Barnsley and Brentford, rather than Manchester United and Liverpool, to look forward to.

So just how is a game between two clubs outside the Premier League worth so much more than any other team contest on the planet?

Due to huge sums banked by clubs competing in the Premier League, courtesy of broadcasting deals across the globe that total more than £5 billion over a three-year period, every team in the Premier League earns £79.4m a season just by being there. The more times a club is on television, the more money it receives, while every place in the league table incrementally carries more prize money.

During the 2018-19 season, Huddersfield Town received £93.3m from the Premier League, despite finishing bottom. And for the next two seasons, they stand to receive a total of £75m in so-called “parachute payments,” which enables relegated clubs to withstand the financial blow of dropping out of the Premier League. So even if they finish bottom next season and are relegated, Villa or Derby will guarantee themselves at least £170m by winning at Wembley on Monday.

To place that figure into context, winning the Premier League was worth £38m to City this season, with FA Cup prize money a mere £3.6m to the winners at Wembley, and the financial reward for winning the Champions League in Madrid next week will be worth a mere £16.7m to Liverpool or Tottenham.

Winning the playoff final can be transformative for a club and its finances, just as losing can send them into a tailspin of cost-cutting and player sales.

In 2009, Owen Coyle guided Burnley to promotion to the Premier League with a Wembley win against Sheffield United, but the implications were huge for both clubs. Within two years, United were relegated to League One, where they spent six seasons, while Burnley used Premier League income to stabilise and build a club that has now become an established top-flight outfit.

“We were under a transfer embargo at Burnley when we won the playoff final,” Coyle told ESPN FC. “We owed money to Scunthorpe United for a player — it wasn’t really common knowledge outside the club at the time — but we really had to win at Wembley because of the financial situation at the club.

“We did that and got Burnley back into the Premier League and, although we were relegated after one season, the club used the money wisely and laid the foundations that have enabled Sean Dyche to make them the stable, consistent club they are today.

“But Sheffield United went the other way after losing. They ended up in a downward spiral and have only really emerged from that over the last couple of seasons.”

There are no shades of grey when it comes to the playoff final, and few know that better than Kevin Phillips, the former England striker, who played in four of them. Phillips lost with Sunderland (1998), West Bromwich Albion (2007) and Blackpool (2012) before finally winning with Crystal Palace in 2013, when he climbed off the substitutes’ bench as a 40-year-old to score the winning penalty in extra time against Watford.

“People say that winning the playoff final at Wembley is the best way to be promoted,” Phillips told ESPN FC. “But believe me, it is the worst place to lose and miss out on promotion.

“You have battled all season to be promoted and then have to deal with missing out and the prospect of trying to do it all again the following year.

“It’s horrible to lose, but the relief that comes with winning is overwhelming. Relief is the biggest emotion, but maybe it was more pronounced for me because I had lost three times previously in the playoff final.”

Coyle, who also enjoyed playoff final success as a player by scoring in Bolton’s 1995 win against Reading, believes there has to be a unique approach to playing in the game.

“We were 2-0 down at half-time in the final against Reading,” Coyle recalls. “Our manager, Bruce Rioch, played with four centre-forwards in the second half and we turned it around because we went for it.

“But when it is ‘win or bust,’ you have to take more chances and be bold. I used that experience with Bolton when I managed Burnley in the final, telling my players that it was one of those occasions when you really cannot walk off the pitch with regrets.

“You just have to give it everything you have because the rewards, of playing in the best league in the world, are so great, especially when you realise what it could be like to miss out.”

But the sheer magnitude of the finances at stake inevitably seep into the mindset of the players and Phillips admits it is a factor that the winners have to deal with.

“I would be lying if I said that the financial impact didn’t get into the players’ heads,” Phillips said. “It’s human nature to think about what it means to the club and everybody connected with it.

“But you can’t dwell on it. The pressure is big enough without having to consider things like that.”

The pressure now lies with the players of Aston Villa and Derby. They somehow have to perform on the knife edge of knowing that the gulf between success and failure is greater than in any other game in the world.