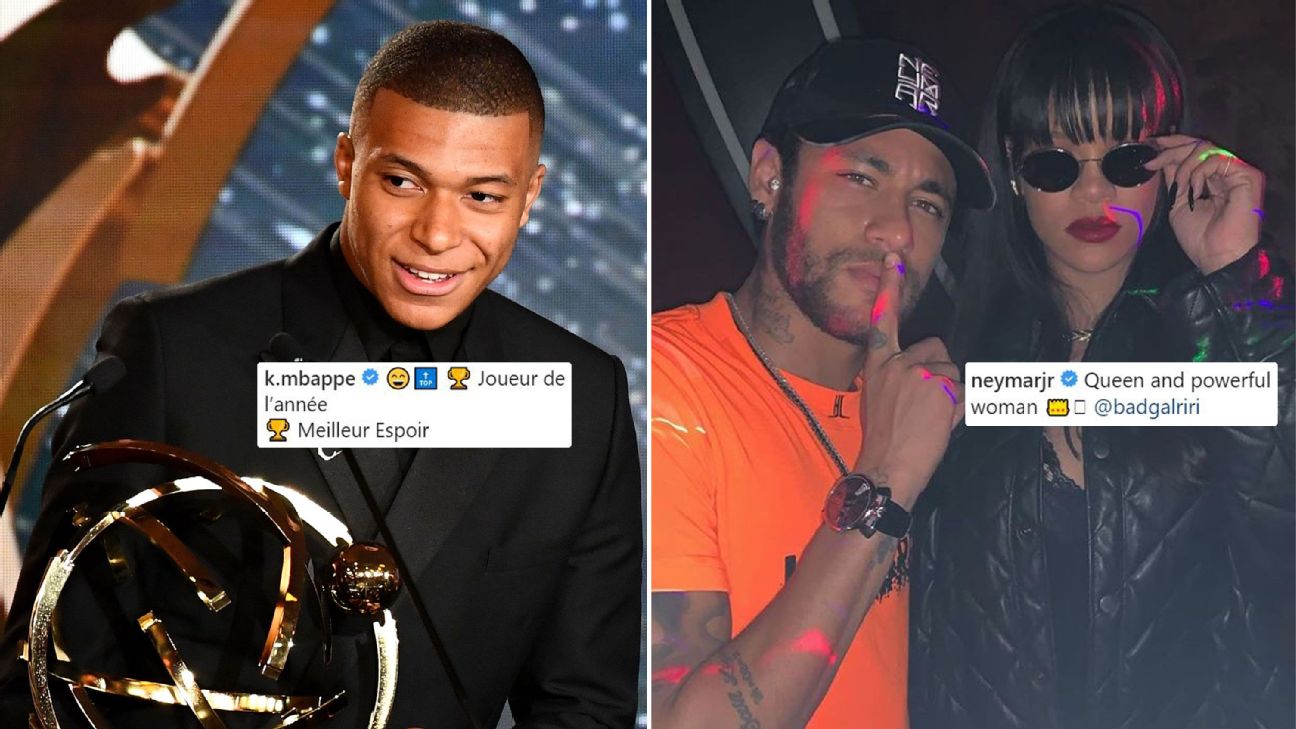 The Toe Poke is here every day to bring you all the weirdest stories, quirkiest viral content and top trolling that the internet has to offer, all in one place.

While Kylian Mbappe was claiming an awards double on Sunday, Neymar decided to give Ligue 1’s big end-of-season ceremony the swerve.

Indeed, the Brazilian wasn’t there to support Mbappe as his Paris Saint-Germain teammate picked up both the Ligue 1 Player and Young Player of the Year awards at the prestigious Union Nationale des Footballeurs Professionnels (UNFP) Football Awards Ceremony in Paris.

– Guardiola’s title-winning knitwear to be auctioned
– What if long-range goals counted double?
– United kit harks back to past glories — who can blame them?

Instead, Neymar was across town frolicking with Rihanna, who is in France ahead of the launch of her new luxury fashion range in Paris later this week. The Toe Poke’s knowledge of the Parisian nightclub scene leads it to believe they were at BOUMBOUM in the 8th arrondissement.

This isn’t the first time Neymar has ditched an illustrious award bash, with the 27-year-old famously opting not to attend the 2018 Ballon d’Or ceremony in favour of spending the evening live-streaming himself playing Call of Duty.

Neymar finished way down in 12th place in the official Ballon d’Or voting that year, which is perhaps why he took the executive decision to stay in and play video games.

Given that he won precisely nothing at the UNFP Awards as well, it would seem that there’s a distinct pattern beginning to emerge.

It’s perhaps worth noting that Gianluigi Buffon also swerved the UNFP Awards gala, though the PSG goalkeeper had an altogether better excuse.

Buffon was unable to attend as he had travelled back to Italy to help bid farewell to his former Juventus cohort and close friend Andrea Barzagli, who retired after Sunday’s game against Atalanta.

Cristiano Jr. gets his first taste of silverware

Juventus were presented with the Serie A trophy on Sunday after bringing their title-winning campaign to a close with a 1-1 home draw against Atalanta.

The silverware was then paraded on the pitch after the game with Cristiano Ronaldo seizing the chance to pose with the spoils.

Unfortunately, a momentary lapse of concentration resulted in the Juve superstar giving his son, Cristiano Jr., a rather closer look at the Scudetto than he might have wanted.

Clearly preoccupied, Ronaldo then clumsily allowed the trophy to slip again and this time hit his partner Georgina Rodriguez, who was stood to the right of him.

You’d think, given the sheer amount of accolades and awards he’s won over the years, Cristiano might be a little better at keeping hold of them.

…but Suwalki, who are also battling the drop, score in the 92nd minute of their game to relegate Bytow! 🤯pic.twitter.com/vK6cGHiM9D

If you thought the final day of the Premier League title tussle between Manchester City and Liverpool was dramatic then just wait until you see how things unfolded at the bottom of the Polish second tier.

With one game left to play, Bytovia Bytow needed to beat fellow relegation candidates GKS Katowice and then pray that Wigry Suwalki (level on points with Bytovia and narrowly above them on goal difference) took nothing more than a point against Rakow Czestochowa. Both matches were locked at 1-1 until, deep into the 96th minute of stoppage time, Bytovia goalkeeper Andrzej Witan headed home an outrageous winning goal to keep his side up — or at least that’s what he thought.

Unfortunately for Bytovia, word soon filtered through that Wigry Suwalki had also scored in stoppage time to win their game 2-1, thus condemning Witan and his teammates (and their opponents GKS Katowice) to the drop, all on goal difference.

So close and yet so very, very far.