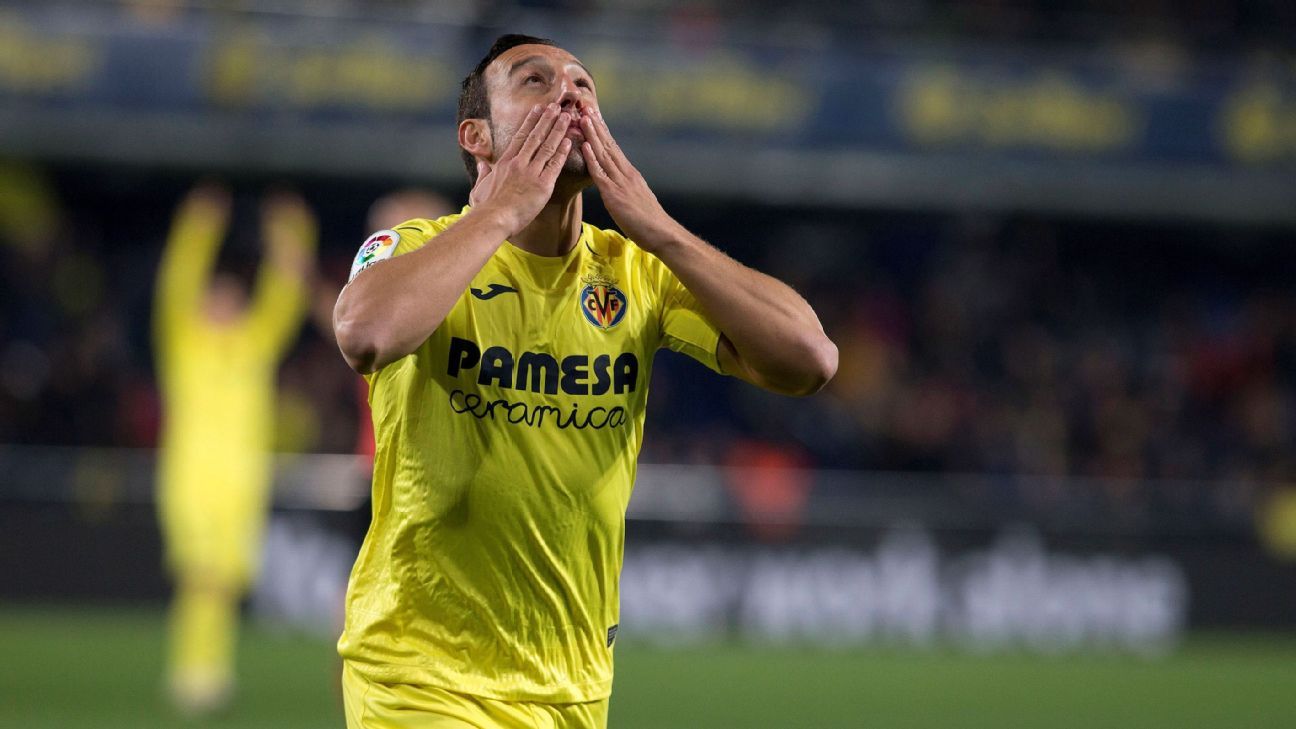 This has been such an epic season, brimming over with drama, quality, tears, surprises, incompetence, confusion, sackings, fight backs and heroism that I’ve decided two trophies (La Liga and the Copa del Rey) simply aren’t enough.

So here are a few medals and awards that acknowledge that the tapestry of a Spanish season is not woven by excellence alone, that the supporting cast, sometimes, keep us on the edge of our seat, laughing, despairing, roaring (with joy or anger) almost as often as the elite do. This is their moment.

This one was very nearly a tie. Two diminutive guys, bursting with so much talent and character that you’d imagine they’ve been given theirs and someone else’s as well: Santi Cazorla and Iago Aspas.

Aspas is a magician. It’s that simple. He carried Celta Vigo on his back, scored at a higher goal-per-game rate than ever before in his career at a time when the majority of his teammates played like competition winners. “What are those three conjoined metal poles with a fishing net draped around them?” Celta’s defenders and other attackers seemed to be asking each other for most of the season. They redefined clueless.

Those of us who consistently adjusted our TV sets for parts of the season because it looked as if Celta were playing on pause or delay when the opposition were ruling around at double speed eventually accepted it was just that the boys from Balaidos were actually conducting a scientific experiment to see how closely they could flirt with gutless relegation and still have Aspas rescue them.

He is not only a wriggling, inventive, anarchic, heroic, lion-hearted imp, he’s utterly brilliant value to watch whether you feel anything for Celta or not. And like some Galician papa bear cuffing his idiot cubs into line while simultaneously scaring off predators, he ensured that there was vigor, instead of rigor mortis at Celta these past couple of months.

All of which tells you how massive Cazorla’s impact has been this season in order to (just) pip Aspas to the prize. Part of the judge’s final decision, what swung the tie breaker, is that it wasn’t so long ago that this 34-year-old with a tendency towards blushing and a bravery gland the size of Tenerife was in dreadful agony and fearful of his ability to walk, let alone play football.

Indeed, his doctor told him that if the operation to replace around nine centimetres of Achilles tendon enabled Santi to walk in the garden with his kids then it’d be considered a good success. Bacteria ate away at his leg, operations came and went, his continued excellence as an elite athlete shouldn’t have been possible. Yet after he appeared as if by magic from a smoke-filled tube last August — rejoining the club at which he truly made his name — having lost considerably more than 600 days to injury and illness, he ensured that Villarreal fought off relegation.

Playing in a position and covering ground that would have tested a 25-year-old, Cazorla shuttled the ball around, prompted teammates to react, entertained the crowd, scored and created goals. And after he wept with frustration, embarrassment and self-reproach all the way home from Sevilla to Spain’s eastern coast and Yellow Submarine HQ, having missed a penalty to save a point at Real Betis, he shrugged off the pain and raised his game.

This was magnificent from our award winner, and not only did he keep Villarreal up, take them to a European quarterfinal and play joyous football, he won back his place in the Spain squad too. Santi, we salute you.

The ‘Exactly What Did I Do Wrong, Boss?’ Award

Hands-down winner here: Sergio Reguilon. Born in Madrid, a Real Madrid supporter, joined the club 14 years ago, worked his way up through the ranks, was promoted into a team that looked as if it couldn’t tie its own shoelaces. This 22-year-old left-back made his Madrid debut in the midst of a season that you would describe as comically hapless, if only that weren’t too generous.

In La Liga, prior to Zinedine Zidane taking over, he started 11 times between November and April, and the team won 10 of those matches: a 91 percent win rate and four clean sheets. He even carried the fight, verbally, to Luis Suarez during Madrid’s 1-0 defeat to Barcelona at the Bernabeu.

Once Zidane was in charge, the kid saw duty just twice more in 11 matches — a win and a draw. Athletic, a decent user of the ball, and bristling with precisely the “you won’t get past me” spirit that Los Blancos desperately needed a transfusion of all season, his omission was utterly bizarre. Zidane, meanwhile, managed four defeats and a draw in the nine matches without Reguilon in the team. Zizou, J’accuse!

The ‘Hold On, Hold On, What Just Happened?’ Award

This one’s for Jan Oblak, and it’s probably the only thing he’d like to drop all season. La Liga’s best keeper, by a distance, the Slovenian was the first one to give the outside world a hint that not everything was cooking by gas at Atletico Madrid. He held off and held off accepting the club’s offer of a new contract while, given the fact that on his day he’s easily in contention to be considered the world’s No. 1 keeper, the rest of Europe’s big-spending, big-ambition clubs hovered. “Leave me alone, stop hassling me about this,” was his overall attitude.

Then, suddenly, even though World Cup-winning Lucas Hernandez makes it clear he’s jumping ship for Bayern Munich, Oblak trusts Atleti and signs up for a further two years, until 2023, with a buyout clause of €120 million. What immediately follows is that Diego Godin leaves, Juanfran leaves, Filipe Luis leaves, Diego Costa completes a season where he’s scored two La Liga goals, Antoine Griezmann announces he’s moving this summer, Chelsea’s transfer ban makes it likely they’ll want Alvaro Morata back and Rodri is the subject of a heavy, heavy “we want you now” seduction from both Barcelona and Manchester City — one of which he seems likely to accept.

Celta and Madrid had six coaches between them this season. The former nearly got relegated, the latter embarrassed themselves. Barcelona’s Ernesto Valverde has won — at the time of writing and with the Copa del Rey final to come — four trophies in two seasons, and the first questions he had to answer after being knocked out of the Champions League semifinal, by one goal, were: “Are you thinking about resigning?” “Are you worried about being sacked?”

Betis just dismissed the coach who won them a place in European football last season and took them within three points of repeating that feat, despite his directors not signing him a decent goal scorer, and who coached Los Verdiblancos to wins over Madrid, Barcelona, Atletico and Sevilla while doing so.

In the midst of all this, Espanyol’s board withstood massive criticism, pessimism and pressure to sack Rubi, when his team won just twice in 16 matches and sank to within two points of the relegation zone. They finished seventh and play UEFA football for the first time in more than a decade next season.

Better still, however, is Marcelino’s story. At Christmas, driving back to his Asturian home with his wife and mother, he crashed into a wild boar that darted out onto the darkened road in front of him. His injuries were minor, his mother’s not so. His team was scoring fewer than a goal per game, the title race was lost to them, they had just four victories in 17 outings, and given that the Mestalla is an ultra-unforgiving venue, his job was in serious doubt. Just a few days earlier the Mestalla had indulged in the traditional “Panolada,” which signified “Get Out!” to both owners and the coach.

His employers held firm, his players rallied. He kept his job. Form is temporary, class is permanent, they recalled.

Cut to today. Valencia’s centenary season is decorated with a Europa League semifinal, a Copa del Rey final and, most importantly, fourth position and the Champions League next season. Sacking a coach isn’t automatically wrong; it’s just often a response from people who don’t understand, who are suffering from what Sir Alex Ferguson called “squeaky bum time” and the results are often as catastrophic as the decision is stupid. Holding your nerve can work. This is another trophy for Marcelino, which he may wish to share with his board.