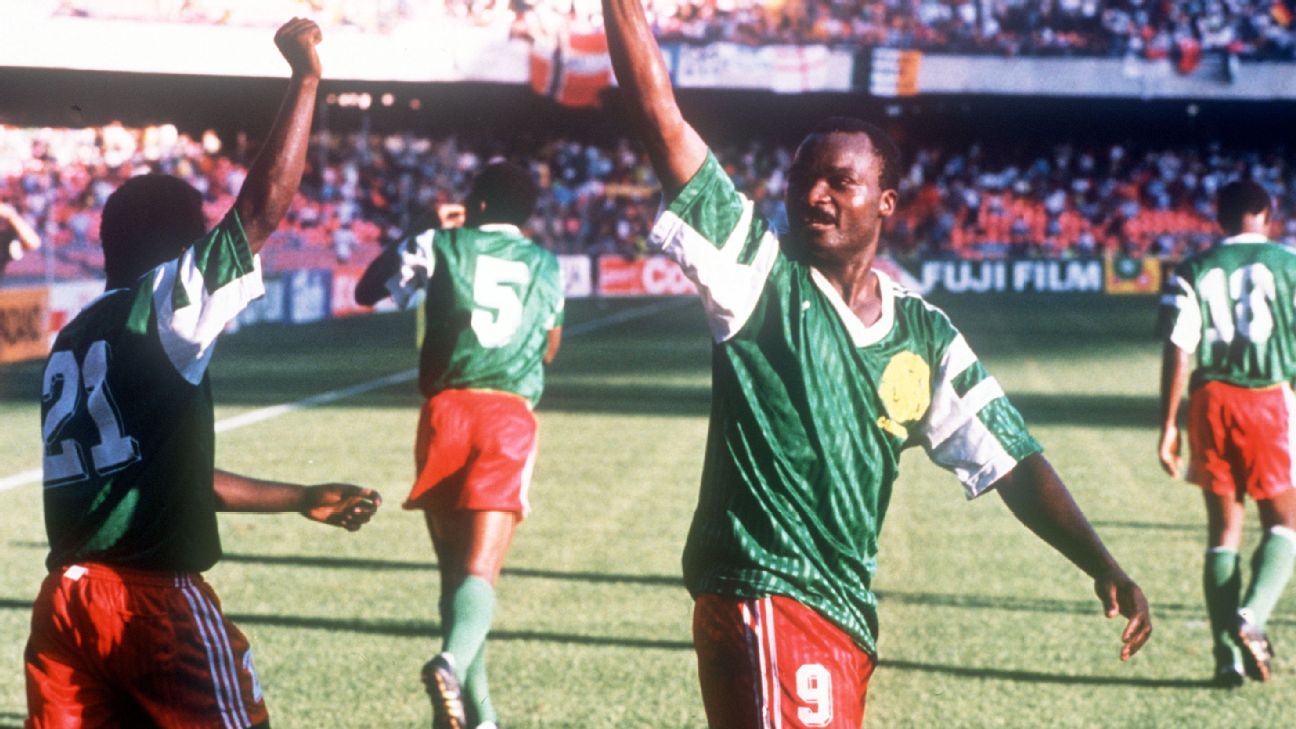 As Roger Milla and Francois Omam-Biyik — two of the architects of Cameroon’s finest footballing hour — each celebrate their birthday this week, ESPN’s Ed Dove remembers the Indomitable Lions of 1990 and their unforgettable World Cup exploits.

To date, no side has matched the Central Africans’ performance in Italy, where they reached the quarterfinals and stood within seven minutes of the final four.

Their adventure ended in Naples, at the hands of England, who battled back from two goals down to progress in extra-time and set up a semifinal meeting with eventual winners Germany.

Milla and Omam-Biyik were responsible for the defining moments of that run.

The former, who set the record for the oldest goalscorer in the tournament — before breaking it four years later — netted a string of goals en route to the quarters, and the latter scored the winner in the opener against reigning champions — Diego Maradona’s Argentina — in Milan.

That 1-0 triumph remains one of the greatest giant-killings in the tournament’s history, and rivals Senegal’s 1-0 victory over France in Seoul 12 years later as the World Cup’s most unforgettable tournament opener.

The gulf in quality — at least on paper — was staggering, with Argentina, four years after their triumph on home soil, took on players who were, bar certain exceptions, amateurs.

“This was an Argentina team who were champions of the world, who represented everything, who had Maradona, who was our idol,” former Cameroon attacker Emmanuel Maboang tells ESPN.

“I’d already watched the World Cup in 1986, so I knew [Claudio] Caniggia, Maradona, all of Argentina’s team, as did all of my teammates.

“We’d seen a lot on the television, watched their training sessions, and seen Maradona, but even when he arrived at the stadium, I went right to him, asked him questions, stopped my warm-up. We all took photos with him, and we stopped everything for him.”

Despite the chasm between the two sides, Cameroon were undaunted by their ominous opener.

“We knew that we were combatants,” Maboang says. “We’d left as amateurs, but we’d done five months of preparation, and we absolutely wanted to win this match.

“We had no doubt, because we knew each other so well. We said that, apart from Maradona, the rest of the team were beatable.

“We left without any complex, and everyone — even the substitutes — were confident because we’d played matches, we knew how each other played.

“We told ourselves that it was just football; it was 50-50, even though they were favourites.”

For goalkeeper Joseph-Antoine Bell, Cameroon’s unity underpinned their confidence heading into the match, regardless of pre-tournament rumours of an increasingly personal rivalry between him and fellow stopper Thomas N’Kono.

“We weren’t — let’s not mistake it — stronger than our opponents, but the idea was that a team is not one good player next to another; a team is that one plus one can give you three.

“If we fought well together, if we were good within the group, we could produce something that could transcend the players on the pitch…. and that’s what happened.”

Francois Omam-Biyik: The Header That Rocked The World

Despite starting the game with a swagger, Argentina were unable to break down the Central Africans, and increasingly struggled with their physicality.

The Cameroonians’ confidence began to grow, and they took the lead in the 67th minute, when Emmanuel Kunde crossed a free kick into the area, Cyrille Makanaky flicked the ball into the sky, and Omam-Biyik leapt – for what seemed an eternity – before planting a downwards header towards Nery Pumpido.

“[Omam-Biyik] was a great scorer with his head,” Maboang says. “When he scored, I was warning up with Milla, because we were going to come on, and the coach was watching how things went.

“[Kunde] shouldn’t have even crossed, I know he never crosses with his left – he’s right-footed – sometimes, he’d do that [with his left] in training, but never in matches.

“He positioned himself, and I asked myself what he was going to do. We knew about his strong right-footed strike, but not with his left.

“I waited for an instant, and the ball rose. Francois jumped, and I knew – when I saw him leap — that he’d get on the end of it. I knew he’d get high, we knew he could do this, but we didn’t know he’d get his head on it like that.”

Argentina’s goalkeeper, a veteran of the 1986 success, was caught cold, and fumbled the ball over the line.

“People can say that maybe 1000 times it wouldn’t go in, but I’d seen Francois score so many goals in training, where it went in off the goalkeeper, where it bounced off the ground and went in.”

“Francois’s goal, even if he did get really high, was very unlikely,” admitted Bell.

“We wanted to win, we were good together, and we were very solid. We got the reward with this goal, which, nine times [out of ten] doesn’t go in.

“One day, it happens, and that’s what happened on this day,” the stopper continued.

“When he jumped like that, you felt it was going to go in.

“I guessed that, at this moment, [Pumpido] was going to make a mistake First of all, he didn’t have a lot of work to do, and, as the match went on, I felt that he was primed to make an error because he’d had nothing to do.

“Cameroon were surprising [Argentina] because they didn’t expect a match as difficult as that, and therefore, it resulted in a bit of a lack of concentration, or even of lucidity, and making that error.”

Argentina, stunned, struggled to rouse to recover against opponents who became increasingly frantic in defending their lead.

Andre Kana-Biyik had already been dismissed before Benjamin Massing was shown a red card for an infamous x-rated lunge on Caniggia, losing a boot as he sent the Atalanta striker sprawling on the turf in an anguished display of agony.

It was another vivid image of a dramatic and pulsating encounter, and it sowed in the consciousness of the viewing public a perception of a brutish and rugged Cameroon side that relied upon brawn rather than skill to bully a way past the competition.

Bell is unabashed about Cameroon’s approach against the South Americans, and the physicality that underpinned their run in the competition.

“The 1990 team was physical, that’s clear,” the former goalkeeper says.

“For any team to perform, they need to know their strengths, and if you don’t work on your strengths, you aren’t very intelligent.

“Cameroon did well to use their strengths, and were right to do so. [We used] — up to the limits — the lacunas in the rules of the era.”

Maboang acknowledges, however, that the Lions overstepped the line, even if he rejects the negative stereotype that has since accompanied the team.

“Maybe the image that remains, against Argentina, is Massing’s kick on Caniggia, who had just gone past two players,” the 50-year-old says. “But apart from that, we had cards which weren’t justified. It was the opening match, and the officials could have been more tolerant.

“I spoke to the referee who oversaw this match, and I told him that Cameroon weren’t particularly nasty during the World Cup.

“There was no karate, there were no anti-football gestures, Cameroonians don’t like playing brutally. We’re just well-built.”

The Omam-Biyik-inspired victory over Argentina set Cameroon on their way, and the tournament was primed for Milla, who came off the bench in the second match — against Romania — to score twice in 10 minutes and send Valeri Nepomniachi’s side into the Second Round.

It could all have been so different, with Milla added to the squad only at the instigation of Cameroon president Paul Biya, who insisted the veteran striker — then 38, perceived to be past his prime, and winding down his career on the island of Reunion — was included.

Milla hadn’t been in the Indomitable Lions’ Africa Cup of Nations squad earlier that year, when they’d fallen in the group stage.

“Failure at the Afcon in 1990 permitted Milla’s return,” Maboang says, “because if we hadn’t had that failure, we’d have gone [to the World Cup] with the same squad, without modifying anything.

“He was very sad to see Cameroon lose at the Afcon, because he saw our talent,” the former Canon Yaounde star stars. “He hadn’t been there for the qualifiers, but, thanks to the head of state, he joined us and came to the World Cup.

“In the changing room he didn’t talk much, but he’s someone who’s passionate about football, about his country, and he wanted to win.”

Milla scored two goals in two minutes in extra time in the Round of 16 as Colombia were dispatched — prompting his famous hip-swinging corner-flag shimmy — to set up a quarterfinal meeting with Bobby Robson’s revived England.

The Three Lions took the lead through David Platt in the 25th minute, but two Cameroon goals in quick succession — from Kunde and Eugene Ekeke – turned the tie on its head.

Gary Lineker equalised from the penalty spot seven minutes from time, and then, as the Africans wilted, again stepped up to bury a spotkick midway through extra time.

By this point, as Maboang notes, the race had been run.

“Apart from Milla, Bell, N’Kono, and a few older players who were aware that we were going far, [many players] were already tired mentally before the England game. I wanted to go home and have a party.

“The semifinal or final didn’t mean much to me. We’d said that we were fed up and we wanted to go home, and to be honest, the sports minister said that we’d already done our maximum and that we’d done enough to go home.

“[He said] they didn’t even have the money to pay for more matches, the hotel can’t be paid for the semi or the final, there wasn’t money to pay the match bonuses. There was no pressure, our work was already done, and we wanted to go home.

“Several players had already packed their bags [before the England match], and we didn’t care. I didn’t even watch the semi or the final, I wanted to go back to Yaounde, to Douala, to eat, drink and see my family. I was sick of it.”

Some 29 years later, and their achievement has never been eclipsed, even if it has twice been matched, by Senegal in 2002 and Ghana eight years later.

Nonetheless, despite the exploits of those two fine teams, Cameroon’s performances in 1990 — defeating the reigning champions, rattling England and coming within minutes of the semifinals — remains arguably Africa’s finest, and most vivid, hours on the grandest football stage of all.

“Honestly, we didn’t really think that we were writing history,” Bell says. “We thought about the present moment, that we had a match to win and we wanted to win it.

“It’s only afterwards we said: ‘That has never been done before’, because don’t forget, if you think too much about history, that can put the breaks on you, it can block you, because it can seem enormous.”

As the years tick on, as Milla turns 67 and as Omam-Biyik hits 53, these bona fide greats of the African game can look back on that summer in Italy, and remember achievements that still represent — almost 30 years later — the continent’s high point on the global stage.

Do Spain’s players match Luis Enrique’s desire?
FIFA rejects France VAR protest over nixed goal
Pena home run in 18th inning gives Astros a series sweep of Mariners
What’s it like to take a penalty at the World Cup? ‘No joy, just pure relief’
Why Brazil vs. Croatia is also a battle of iconic kits and deeper meaning