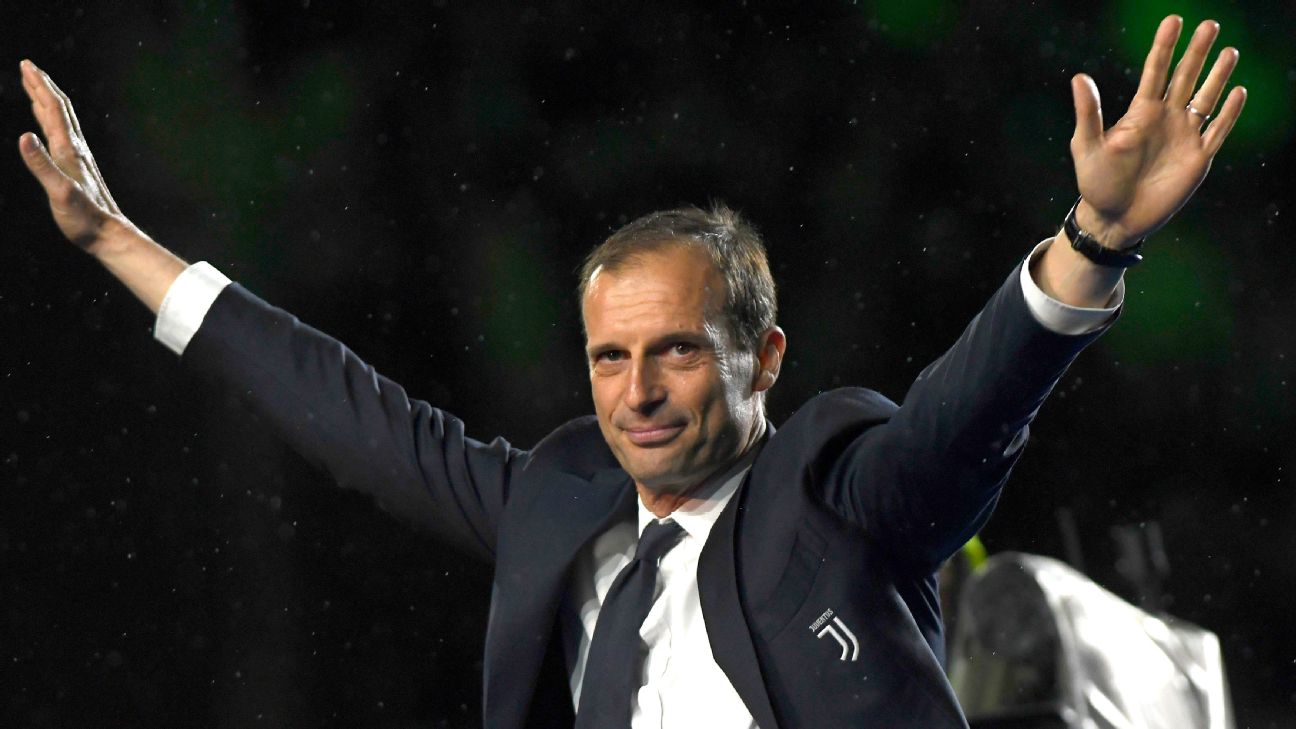 Even the most frigid of Juventus haters could not help but be moved. Juve president Andrea Agnelli and outgoing manager Max Allegri sat up on stage together following their Allianz Arena season finale — a 1-1 draw with Atalanta. Just before the news conference, the entire Juventus squad trooped in and took their places around their outgoing coach. It was the polar opposite to how the previous boss left, when Antonio Conte, who had won three-straight Serie A titles, resigned abruptly on a torrid day in mid-July.

If you’re going to part ways, this is the way to do it.

The pair appeared genuine. Agnelli, who can sometimes look wooden and scripted, seemed sincere when he talked about how, in addition to working with a great manager, he had gained “a friend.” Allegri, for his part, seemed to choke up on more than one occasion, cloaking it by reaching for a sip of water.

There was even a moment of levity and self-deprecation. When asked if it was akin to the end of a romance, Agnelli — who like his soon-to-be former manager is coming off a failed marriage — quipped: “Neither Max nor I are qualified to talk about romantic relationships.”

So, it ended about as well as it could, given the circumstances. But how did we get here? How was it that Agnelli went from saying that “the cycle continues with Allegri, this team, apart from Cristiano Ronaldo, is relatively young (on the night Ajax knocked them out of the Champions League) to Saturday’s “conscious uncoupling?”

According to a source familiar with the situation, Agnelli was genuine in his belief that night in Turin that persisting with Allegri was the right decision. Allegri had reached two Champions League finals in his five seasons at the club, in addition to delivering five Serie A titles and four Italian Cups. What’s more, he had been a “club man” throughout. Unlike his predecessor, Allegri rarely blamed players or referees when things did not go right. He was a players’ coach, and that was important on a team filled with veterans, many of whom had enjoyed success elsewhere. Players liked him, he had an innate ability to defuse situations and, just as important, Ronaldo — on whom the club had invested nearly $350 million in wages and fees — liked him.

Despite what Agnelli said that night about Juventus being “relatively young,” this was an ageing veteran-filled side. By the end of the 2019-20 season, Ronaldo and Giorgio Chiellini would be 35, Leonardo Bonucci, Mario Mandzukic, Blaise Matuidi and Sami Khedira would be 33, while Miralem Pjanic, Juan Cuadrado and Wojciech Szczesny would all be 30. Every club has a “window of opportunity,” and Juventus’ was beginning to close. Changing managers could be disruptive.

As for Allegri, he had reflected on went wrong against Ajax and in the previous round against Atletico Madrid. He had long been talking about the need for Juventus to learn how to impose themselves on opposing teams, particularly in Europe. Clearly, this had not happened. Some of it was his responsibility, of course, but some of it came down to the skill sets of the players and the mentality, particularly in midfield. He had a year remaining on his contract and was confident the club would extend it.

In his mind, continuing for another season with a deal winding down was unthinkable. He would take the opportunity to ask for a raise, as well, since he felt it would cement his authority — plus, let’s face it, he felt he deserved it. And he would ask for more input — he was always consulted on transfers, but he wasn’t the driving force — in terms of reinforcing the squad.

Allegri also was annoyed at some of the criticism he received from some quarters. He blew up on television when challenged by former Italy international-turned-analyst Lele Adani, who asked him what he could do to get his team to be more attacking: “What can I do? I can work with the players individually and try to improve them. And if they improve as individuals, we’ll play better as a group. It’s obvious: The better players you have, the better you play.

“Playing well is one thing, winning is another.”

He then railed about TV pundits who didn’t understand that coaching wasn’t about tactics. That one thing is the sort of football theory you learn from books, quite another is the practice of what happens on the pitch. Those words didn’t necessarily prompt Juventus’ choice, but they did cement the decision facing them. Allegri was who he was and he wasn’t going to pretend otherwise. Players are at the heart of his footballing vision, not schemes, not philosophies. The best way to win was to get better footballers or footballers who he could make better. And he wanted more of a role in picking them.

Agnelli prides himself in wanting to hear different views and not be surrounded by yes men. It’s something he reiterated on Saturday. Within his inner sanctum — a group that includes sporting director Fabio Paratici and vice-chairman Pavel Nedved, among others — the possibility of making a 180-degree turn also was raised. This would involve a philosophical shift and pursuing a “system manager,” somebody more in line with the high-press, attacking football that most top European clubs play. It also would fit with the club’s efforts on the marketing front, with Juventus continuing their transition from a traditional club to an avant-garde lifestyle brand, as evidenced by the changes to the club’s crest and the radical redesign of the striped jersey.

– Marcotti’s Musings: Bayern say bye to legends, Kompany moves on
- When does the transfer window close?

Equally, though, it was felt that given the current squad’s makeup and the Ronaldo window of opportunity, this only made sense if you could attract a top name — someone like a Pep Guardiola, a Jurgen Klopp or a Mauricio Pochettino — except none of them would be available this summer.

The inclination at that point was to continue with Allegri. Yet it became clear that if he was to continue, it would be on his terms. And the realization slowly dawned that the guarantees he was looking for in terms of influence on transfers in particular would be hard to meet. Maybe it was time to end this. If you have to make a change, obviously, it’s best to do so at the right time, even though you can never be sure when that is. But if you get it wrong, it’s less damaging to do it a year early than a year late.

Allegri said the realisation that he would no longer be the Juventus manager only hit him when he walked out of his final meeting with Agnelli on Thursday night. Agnelli said it was the “most difficult decision” he has had to make in his time at the club.

By Sunday night, as Juventus celebrated their title in front of their supporters, it likely felt like the right decision. Gauging public opinion is always tricky, but the sentiment among the majority of fans appeared to be gratitude toward Allegri, rather than anger toward the club at his departure.

Now comes an equally difficult — though less painful — decision for Agnelli: figuring out what sort of club he wants Juventus to be and what sort of manager can take them there.