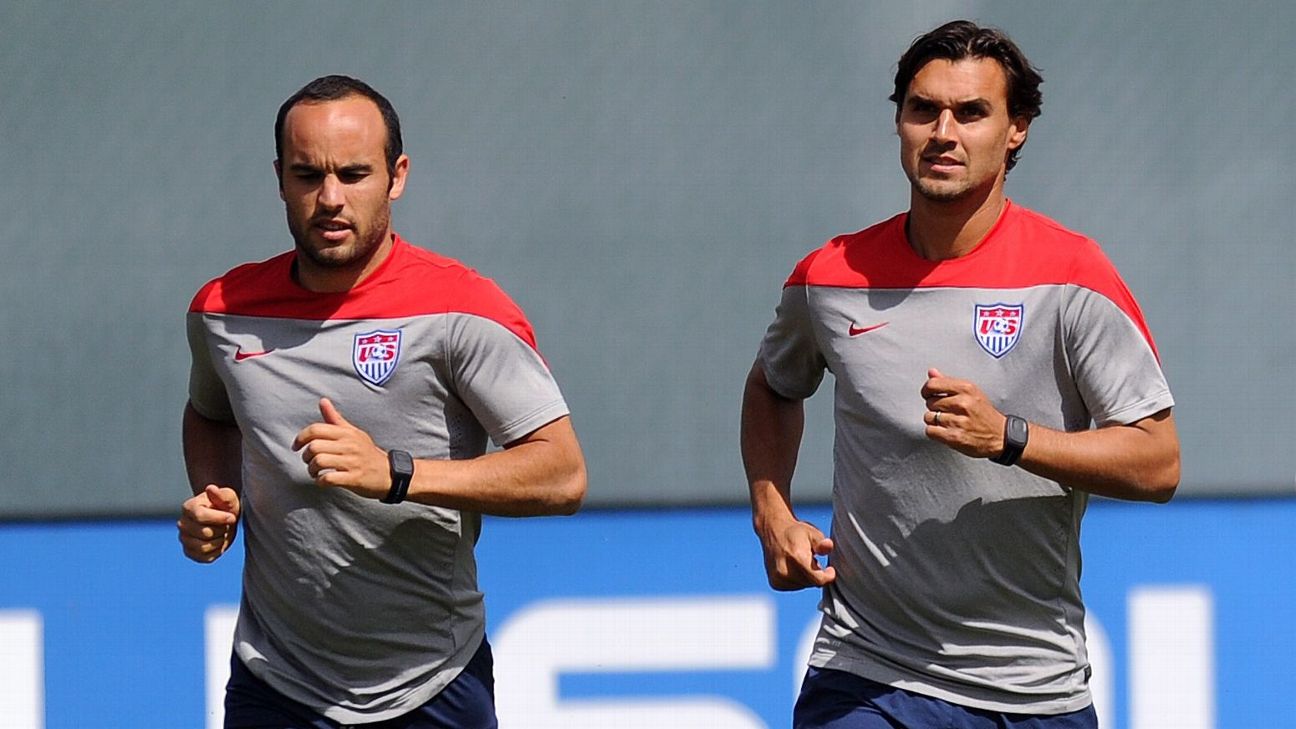 There is a new goal-scoring king in MLS. Chris Wondolowski‘s second goal against Chicago on May 18, pouncing on a David Ousted fumble for an easy tap-in, gave him 146 career MLS goals, breaking Landon Donovan’s mark of 145.

The juxtaposition of the two players couldn’t be more striking. Big things were predicted for Donovan starting in his teenage years and he went on to excel for both club and country. Wondolowski? In pure soccer terms, he came out of nowhere. He grew up in Danville, Calif., went to nearby Chico State University. He was the 41st player taken in the 2005 MLS Supplemental Draft, this after 48 players had been selected in the MLS SuperDraft, making Wondolowski the 89th player taken overall.

Wondolowski didn’t become a full-time starter until 2010 at the age of 27 yet Donovan has long been an admirer of the San Jose star, having been teammates at international level. With his record now broken, Donovan spoke to ESPN FC, offering his reaction to Wondolowski’s accomplishment.

ESPN: What do you make of Wondolowski breaking your record?

Donovan: I think if you take a step back, and I don’t have the stats on it, but the remarkable efficiency with which he’s done it, in the years where he’s actually played, is pretty incredible. And then to break a record like this you obviously have to be consistent, which he’s been. So, I think that speaks to it as much as anything. If Josef Martinez stays in the league for another 10 years, you would expect that he’s going to break it. But Wondo started really late, and was a guy that nobody had ever heard of, or nobody would have ever expected would get to this place.

I was talking to some of the guys on my indoor team [the San Diego Sockers], and they said Wondo played indoor at one point. I had no idea. That’s where his career was at the time. He figured, “I’m not doing anything, I couldn’t make a team anywhere. Can I try out and play indoor?” And he played indoor for a while. Actually some of the guys told me too that he went an entire year without scoring a goal. Which is really hard to do in indoor. So somewhere along the way, it clicked for him, and once it clicked, he was consistently the most prolific scorer in our league for probably over a decade.

ESPN: In your eyes, what makes a goal scorer, and how is that Wondolowski was able to put the ball in the net with such consistency? What are some of the attributes you need?

Donovan: There are a few different ways that I’ve seen for someone to become that kind of goalscorer. One is you’re just incredibly efficient with your chances. Two is you take so many shots — almost the opposite — that eventually you’re going to score; someone like Ante Razov comes to mind, where he led the league in shots by a mile every year and he always finished near the top of the leader board.

Wondo falls in the first category and he also falls into a third category, which is he seems to always be in the right place at the right time. Two players that immediately come to mind who best personify that are Clint Dempsey and [Javier “Chicharito” Hernandez]. Every time the ball bounces around in the box, it seems like it’s hitting their head or their foot or their knee or their chest and going in. Wondo always winds up in the right spot at the right time to find the ball. And when he gets there, he scores. The combination of those two things gives you a pretty good chance to score a lot of goals.

ESPN: Every striker goes through their droughts, they go through their spells where things just aren’t happening for them. What’s the key to getting through a spell like that?

Donovan: Keep shooting. The confidence factor is the biggest problem, and Wondo has never lacked confidence. The biggest hit to him from a confidence standpoint was the 2014 Belgium game [at the World Cup]. He came back and he could have easily gone into a hole, and scored three goals a year for the next five years and fizzled out.

That’s not the path he chose. He said, “It is what it is, we all miss, every forward has missed chances easier than that.” He just kept shooting, and you keep making the same runs, and finding the same way. Percentage wise, it’s going to even out. If you keep doing the right things like that, you’re going to score goals, and he just kept going. I give him a ton of credit for that.

ESPN: Everyone talks about Wondolowski’s movement. Is that something that is coached? How is that skill honed and developed?

Donovan: It’s an awareness thing, and having the mental capacity to understand where to be, and when to be there. Mike Magee had an incredible knack for being a few steps ahead of a play, and a guy would get sprung down the right side of the field and you would look up and Mike Magee would be standing in front of the goal because he had anticipated the play happening 30 seconds before anybody else and he would have a tap-in at the back post.

It’s a different type of movement than “Chicharito” or Dempsey movement. That kind of movement is more of a gambling and putting yourself in a position in hopes that something will fall. But Wondo is playing the percentages and making the run where he thinks the ball is most often going to. You’re inclined to say it’s a little luckier with “Chicharito” and “Deuce.” They just take a wild chance and a guess at where it’s going to go. Wondo sort of knows that when a certain guy gets the ball here, most of the time, the next ball is going here. I’m going to be in that spot in case the ball goes there.

ESPN: Wondolowski, I would think by his own admission isn’t the most athletic guy, but he’s got to be athletic enough to get around on the field. Do you think he’s underrated in terms of his athleticism?

When [Lionel] Messi gets the ball, it always looks like he’s fast than when he doesn’t have the ball. When Wondo is defending or running around the field or checking to the ball, he’s at one speed. But when he sees there’s a chance to score, he goes to a whole different speed and a whole different level. You’re not aware of it, but all of a sudden that excitement in him pushes him up 10 or 15 or 20 percent in speed and jumping ability and athleticism and he then ends up scoring because of it, or getting in the right spot because of it.

ESPN: Sporting Kansas City defender Matt Besler said that Wondolowski is the only player he’s played against who follows up shots 100 percent of the time. Is that something you’ve noticed as well?

Donovan: Yep. Wondo has a mindset that is 100 percent goal scorer, 100 percent of the time. I don’t know how many assists he has (just 39 in 15 pro seasons). I think every year he has like three or five assists, right? It’s not in his DNA. It’s not what he’s thinking about or focusing on. “What is the best way to get the ball in the net, and how can I get the ball in the net?” One way to do that, to score 15 to 20 goals a year throughout his career is to follow up every shot. It’s something that all of us wish we were better at, because it just means you are mentally tuned in and aware and alert in every moment. He always is. That’s why if you take a one-second break as a defender, Wondo will punish you.

ESPN: Just looking at his numbers, you guys never played together at club level, but just in watching him over the years, has he always been the same player, or were there aspects of his game that he really kicked up a notch at a certain point?

Donovan: I’m not privy to what he did or didn’t do in practice or in training, but guys have told me consistently that he stays after training and shoots for 15 or 20 or 30 minutes every day, in all situations and in all types of ways. That pays off. There’s no substitute for just practicing and working hard. I think he’s gotten more clever over the years with his running. I think the league has gotten better so he’s had better players around him who can facilitate the ability to score goals.

But then his natural instincts and aggressiveness are what have kept him consistent. There are times every goal scorer goes through where you take a shot and you think it’s in and it hits the post, or you can’t quite get your technique right, or you’re just not feeling great on that day. But all of the little intangible things that he does kept him in front of the goal and kept giving him chances to score goals time and time again. That’s what you have to do if you’re going to score 10 or 15 or 20 goals a year.

ESPN: You mentioned the Belgium game earlier, it’s easy to say that you have to have a short memory, but the reality of coaching your mind to put that aside, how hard is that? How difficult is it to put those moments in the past and look forward?

Donovan: In some ways it’s really difficult and in some ways it’s really easy. If you allow it to sit in your mind, it can really weigh on you. I don’t have a direct analogy, but it was a little like me getting left off the 2014 World Cup team. You either sit and you sulk in it, or you say, “Okay, good, I have another game. I can just get on with my life.” Wondo had soccer games to play. His Earthquake teammates and coaches were sad for him. The fans felt badly for him. But in the soccer world and life in general, it goes on. You’ve got to get on with it.

He made that decision very quickly. I’m not saying it was easy. I’m sure he had some moments that were very difficult. But it was a little bit of a blessing to just keep playing. If that happens to be the last game of your career, you’d never be able to forget about it. He had the chance of playing and getting to flush that out of his system.

ESPN: When you look at Wondolowski, and having played with him on the national team, if you could single out one trait about him, what would it be?

Donovan: His competitiveness and his passion. I’ve rarely seen a guy who has scored that many goals, that many important goals, celebrate the way he does when he scores the fifth goal in a 5-0 win in a preseason game against a college team. He just loves to score goals, he absolutely loves it. We would often make fun of him because he goes absolutely crazy when he scores. He gets in this mindset where he’s almost going to kill someone after he scores a goal. We make fun of him, but it’s his best attribute. He has this burning desire to score goals, and it comes out when he scores. You see that in his celebrations and I love that about him.