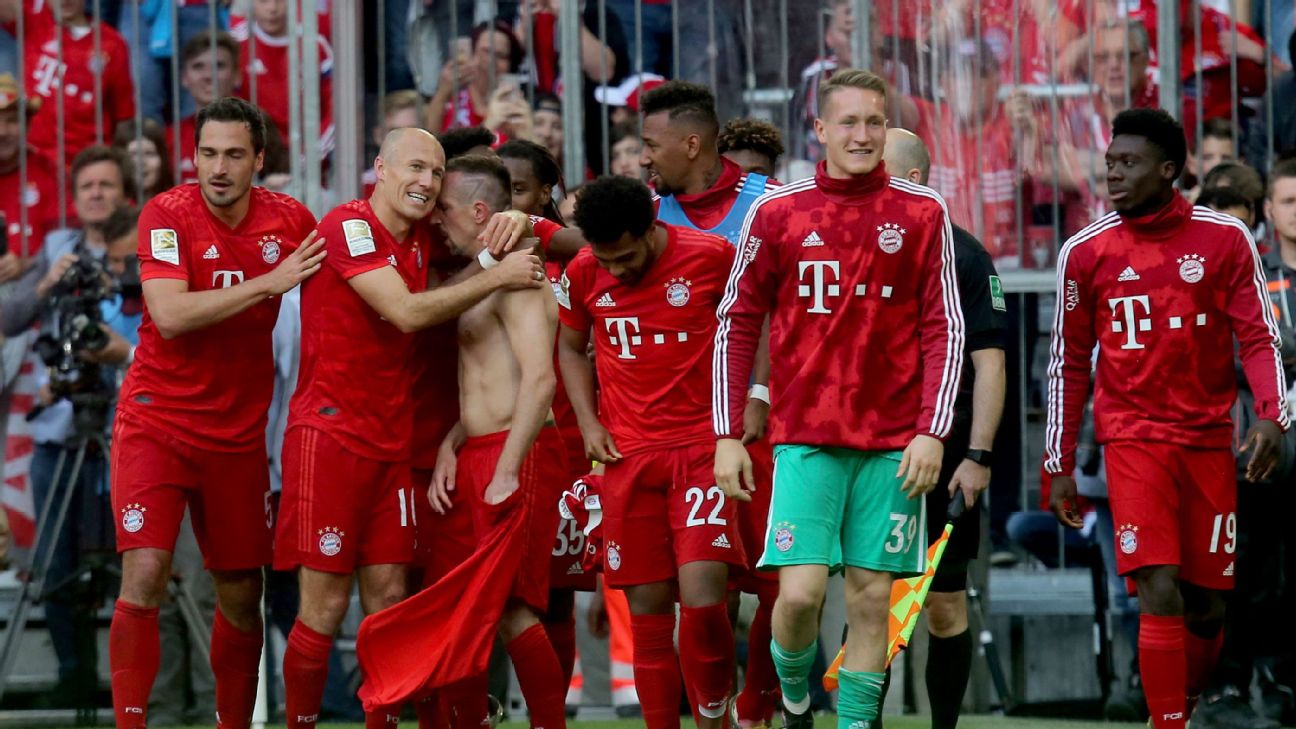 For one final time, the most important duo of wingers in Bayern Munich’s history graced the Allianz Arena pitch and scored as second-half substitutes in a 5-1 win over Frankfurt to help the club to a seventh consecutive Bundesliga title. Then they showed everyone how much they differed as characters after the game.

Whereas Franck Ribery was overcome with emotions and broke down in tears in front of the Sudkurve stand, Arjen Robben bemoaned not finding the net for a second time in a TV interview — it would have been his 100th Bundesliga goal — and admitted that he had done everything to get one last run-out before his farewell.

“It was important to me to play one more time, I was totally up for the game,” said the 35-year-old, who had missed most of the campaign with a series of injuries. They didn’t call him “ego shooter” for nothing in the local tabloids.

- Who are the 30 best players under 21?
- Transfer window grades: Tracking all the big clubs

Even as all of Munich was swept up in nostalgia as the end of a decade dominated by his and Ribery’s spell-binding brilliance, Robben retained his own perspective: first person, first and foremost. The Dutchman’s self-obsessed outlook, nigh-pathological commitment in training and single-mindedness on the pitch neatly mirrored Bayern’s win-at-all-cost philosophy and hard-nosed professionalism.

However, the crowd found it easier to connect with Ribery: an uncontrollable, complicated bundle made up of rough-edged genius, warrior-attitude and puerile humour. Scarred by an accident in his childhood, the Frenchman was an unashamed anti-hero who embraced adversity and made other people’s derision work in his favour. Defenders and fans of rival clubs hated him, which only made Bayern supporters love him all the more.

Club president Uli Hoeness, his biggest fan, cried in the VIP area after the 36-year-old’s irresistible solo run for the Bayern’s fourth goal on Saturday. “Someone up there wrote the script today,” Hoeness said, adding that “Rib und Rob” (Abendzeitung) should be seen as Bayern all-time greats among Gerd Muller, Franz Beckenbauer, et al.

Their place in the club’s pantheon of superstar icons is indeed assured. The duo did not just magically combine to produce the most crucial goal in Bayern’s recent history — the 2-1 winner over Borussia Dortmund in the Champions League final in 2013 — they were also instrumental in lifting the Bundesliga behemoths back to the spheres of the European elite after a few years in the second-rank doldrums.

Ribery’s pacy, unpredictable style immediately added another dimension to final third attacks after his €25 million transfer from Marseille in 2007. A couple of years later, Louis van Gaal’s insistence on balance saw Robben arrive from Real Madrid for around the same price. Seen as big risk because of his persistent injury problems, the Bedum-born Flügelstürmer (winger) was an instant sensation, providing inverse wing-play class on a level which had not been seen in Germany’s top flight for quite some time.

A combined tally of 185 league goals has gone some way to help Bayern win eight Bundesliga titles in 10 seasons. Their deepest impact, however, was on the team’s identity. Germany’s most successful side had traditionally relied on dominant players in the centre: sweepers, all-action box-to-box specialists and powerful centre-forwards. Robben and Ribery made Bayern’s game lateral.

Attacking space and defenders with the ball on their feet, they set off tremors of panic in the opposition and excitement in the stadium; a rush that echoed football’s pre-modern roots as a gallant battle of individual dribblers hell-bent on making inroads into enemy territory.

The new-found emphasis on wing-play begot a more structural approach in midfield which now had to provide defensive cover and a regular supply of passes to the dangermen out-wide. Thanks to “Robbery”‘s domineering influence, the team’s all-important metamorphosis into a position-possession team was both smooth and inevitable. The final step to Champions League-winning excellence was made when they started working much harder to hunt down the ball and protect their full-backs at the beginning of the 2012-13 treble-winning season.

In recent years, Robben and Ribery were no longer able to perform consistently in line with their gigantic wages and pronounced self-importance; the club’s regression since coach Pep Guardiola’s departure in 2016, can partially be explained by the duo’s waning powers to make a difference against top opposition.

Hoeness himself came close to admitting that the club’s reluctance to let them go earlier could have cost Bayern the championship this season. The dressing room will certainly feel a lot more spacious following the departure of the two super-sized egos, but Kingsley Coman and Serge Gnabry, their heirs-apparent, will do well to get close to their sustained levels of mastery.

“Back in the day, I used to watch them on YouTube; learning from them has been amazing,” Gnabry told ESPN recently.

The Germany international, 23, has closely watched the veterans’ positioning and taken a cue from their relentlessness in front of the box. “They are always on the attack,” he added. “They don’t ever shy away from an opportunity to go one against one. Whereas I would have said to [myself] before that you sometimes have to go back [with the ball], they helped me to just go again and again, saying that ‘eventually, you will break through’ [the defence.] Mentality-wise, they have defined an era here. Just to be around them has been been brilliant.”

If Bayern are to get back to the world-beating heights of the first half of the decade, the successors to the most devastating double-act since Paul Breitner and Karl-Heinz Rummenigge in the early 1980s must become nothing less than world-beaters, too.

That’s a tall order, though, and explains why Saturday’s title-celebrations were tinged with sadness — perhaps even fear. Robben and Ribery might well prove irreplaceable.