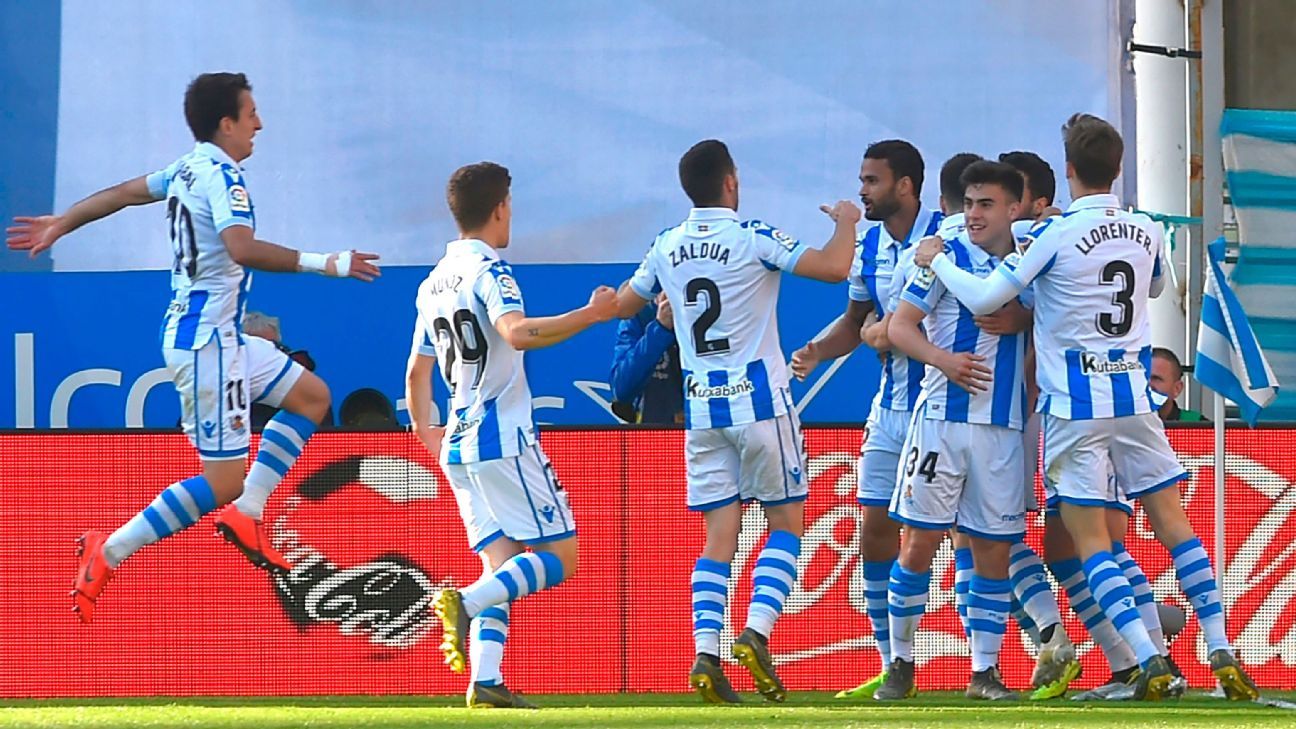 Real Madrid slumped to a 3-1 defeat at Real Sociedad on Sunday as Zinedine Zidane‘s men confirmed third position in La Liga with their 11th loss of the campaign.

Zidane returned as manager in March after a nightmare run of form that resulted in Madrid’s title challenge falling away as well as elimination from the Champions League at the hands of Ajax. But Sunday’s defeat was the club’s third in Zidane’s second spell as manager, with the club having one more match to play, at home to Real Betis, in what has been a testing season.

Brahim Diaz gave Madrid the perfect start with a sensational solo strike on six minutes but Mikel Merino equalised with a left-footed effort that arrowed into the net.

Things went from bad to worse for the visitors when Jesus Vallejo was sent off for handling the ball on the goal line, but Thibaut Courtois saved the resulting penalty from Willian Jose.

Madrid fell behind on 57 minutes when Joseba Zaldua headed home as Courtois lost his footing and Ander Barrenetxea made it 3-1 on 67 minutes.

Madrid started their penultimate match of the season off the back of a 3-2 win over Villarreal last time out and they were soon ahead thanks to former Manchester City man Diaz. After some neat skill down the left, Diaz cut in and finished superbly from an acute angle to put Madrid in front.

Sociedad were level on 25 minutes when Willian Jose found Merino, and he drove his effort past Courtois to peg Madrid back, before Zidane’s side went down to 10 men. Willian Jose met Mikel Oyarzabal‘s pass and looked certain to make it 2-1, but Vallejo blocked his effort on the line.

Replays showed Vallejo handled the ball and the referee pointed to the spot before brandishing a red card but Sociedad could not capitalise. Willian Jose blasted the ball but Courtois guessed the right way and saved his spot kick.

Madrid were stretched with a man light in the second half and the home side went in search of a second, with Igor Zubeldia forcing Courtois into a smart stop six minutes after the re-start. Aihen Munoz was next to go close, but his effort whistled past the post.

Zidane responded by taking off Isco for Luka Modric but soon after the change, his side fell behind. Zaldua planted a header into the corner but it should have been routine for Courtois, who slipped at the crucial moment and saw the ball bounce in.

Courtois was again at fault when Barrenetxea’s effort squirmed underneath his grasp to deepen the gloom on Zidane’s men.