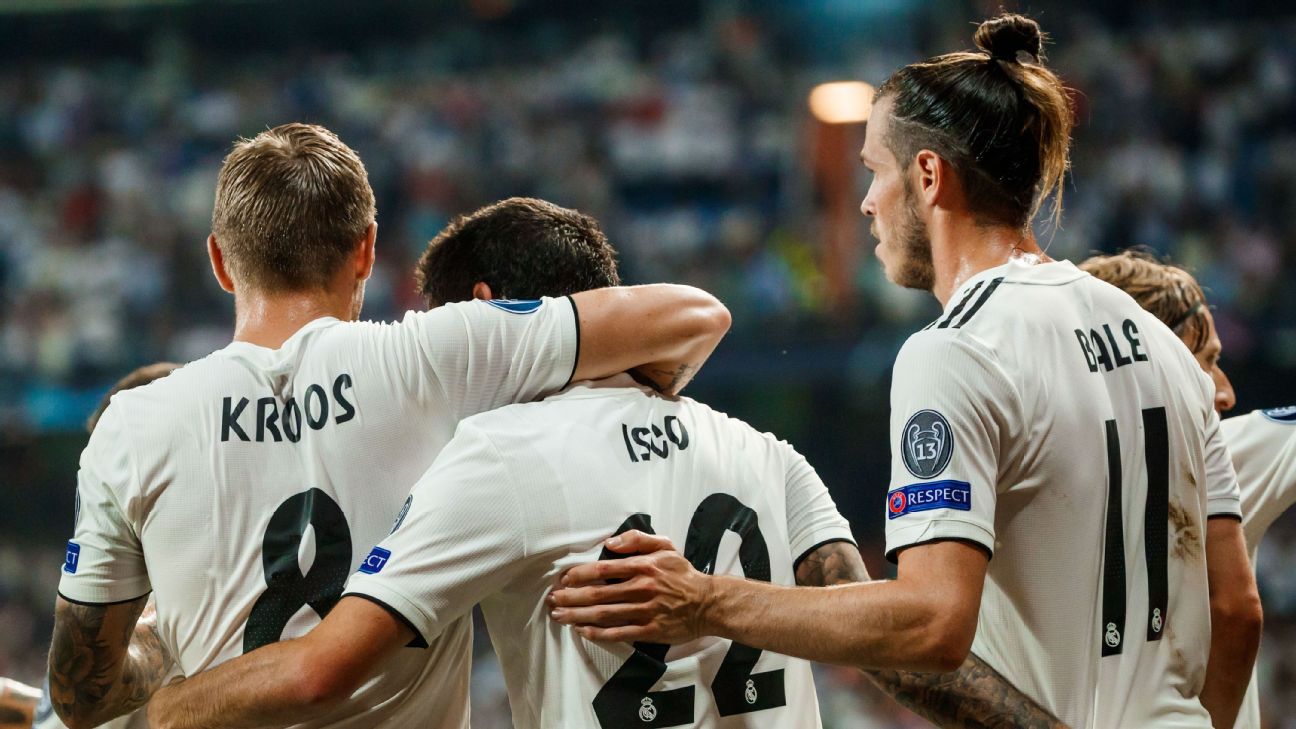 With the transfer window for Europe’s biggest clubs set to open soon — find out when the transfer window opens and closes across Europe’s top leagues – rest assured that Transfer Talk is scouring the world’s media and setting correspondents loose to see what is on the agenda. You can click here to review all the latest transfers.

French champions Paris Saint-Germain are considering a sensational triple swoop for Real Madrid trio Gareth Bale, Toni Kroos and Isco, in a deal potentially worth more than €200 million, according to Le Parisien.

PSG sporting director Antero Henrique is keeping a close eye on the developing situations of each player, with all three Galacticos facing uncertain futures at the Bernabeu following a disastrous season for Los Blancos on both the domestic and European fronts.

Twenty-nine-year-old Bale has been left out of back-to-back La Liga squads in recent weeks, while Isco has had a tough season, scoring just three goals and delivering a solitary assist in a disappointing league campaign. Kroos’ future, meanwhile, has come under continued speculation amid manager Zinedine Zidane’s persistent interest in Manchester United midfielder Paul Pogba, and the 29-year-old could be moved on to make room for the Frenchman.

Milan on lookout for cream of South American crop

Calciomercato claims AC Milan sporting director Leonardo has outlined his side’s plans for the upcoming transfer window, and the Brazilian has identified several young South American players that he hopes can make a big impact on a side that looks set to miss out on qualification for next season’s Champions League.

Among the Rossoneri wish list are two Argentinian midfielders: Juan Sebastian Sforza of Newell’s Old Boys and San Lorenzo’s Matias Palacios. Juventus are also interested in a move for Sforza, who doesn’t turn 18 until February, while Palacios turned 17 a matter of days ago.

Milan’s primary transfer target in South America is in neighbouring Brazil, however, with the club prioritising a move for Flamengo attacking midfielder Reinier Jesus Carvalho. The 17-year-old has earned rave reviews for his performances in the Brazilian youth sides, where he has been anointed as the heir Lucas Paqueta, who himself joined Milan just five months ago.

Man City seek to ‘freshen up’ squad with summer splurge

Manchester City could be set for a major summer spending spree as Pep Guardiola looks to “freshen up” his title-winning side, and has identified as many as four potential signings, the Mail reports.

Among the Catalan coach’s targets is Atletico Madrid midfielder Rodri, while an additional midfielder, defender and striker are also on the agenda.

Should midfielder Ilkay Gundogan depart the Etihad for pastures new, City will also target a move for Lyon midfielder Houssem Aouar, who impressed Guardiola & Co. with his displays in the Champions League this season.

United to pip Arsenal to Pepe?

The Mirror writes that Manchester United are weighing up a £45m move for Lille forward Nicolas Pepe.

The 23-year-old Ivory Coast international has been in stunning form for his club side this season, scoring 21 goals and providing a further 12 assists — form that has guided Lille into next season’s Champions League.

Pepe’s great form in front of goal had alerted the likes of PSG and Arsenal, but with United in desperate need of creativity in the final third, Ole Gunnar Solskjaer looks set to make a move sooner rather than later.

United are also interested in signing PSG midfielder Adrien Rabiot on a free transfer when his contract expires in June, but the Red Devils face competition from the likes of Juventus and Chelsea.

– Mario-Inter-Milan-15m.html” target=”_blank”>The Mail reports that Everton have been offered the chance to sign Inter Milan midfielder Joao Mario for a cut-price £15m, but face competition from Porto and Monaco for the former West Ham man’s signature. The Portugal international has scored just once in 20 Serie A appearances this season.

– Barcelona teenager Jean-Clair Todibo will only be allowed to leave the Camp Nou on loan if the 19-year-old is guaranteed regular first-team football, according to Marca. The Frenchman has been linked with a move to Napoli, but concerns have been raised about Todibo’s path into the first team at the Serie A side.

– Manchester United have agreed a deal to sign 14-year-old Norwegian wonderkid Isak Hansen-Aaroen. The Norway under-15 international has enjoyed trials at Liverpool and Everton during his fledgling career, but looks set to officially join United on his 16th birthday in August 2020, writes the Mail.