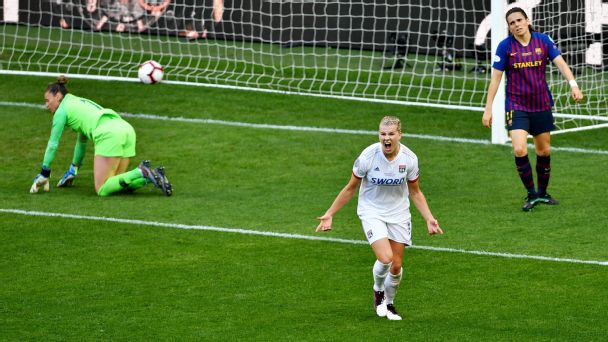 Hegerberg’s treble came in just 16 minutes after Dzsenifer Marozsan had opened the scoring as the French champions won the competition for the sixth time in their history. Asisat Oshoala scored a late consolation for Barca.

Champions League success brings up the treble for Lyon, who had already sealed a domestic double heading into Saturday’s final in Budapest by winning the French league and cup.

Barca, who were playing in their first-ever European final, had not conceded a goal in their last seven Champions League matches but they were swept aside by a relentless Lyon team who have not lost a competitive game since last May.

The front three of Hegerberg, Shanice van de Sanden and Eugenie Le Sommer had too much movement and pace for the Catalans, who conceded all four goals in the first half an hour of the game.

The impressive Van de Sanden centred for the Hungarian Marozsan, who was playing in her home city, to break the deadlock from close range with six minutes on the clock.

Hegerberg then took centre stage and the Norwegian international doubled Lyon’s lead in the 14th minute when she was sent clean through by Van de Sanden. She added her second from six yards after good work from Amel Majri.

England international Lucy Bronze then crossed for Hegerberg to take the game out of Barca’s reach with just 30 minutes gone.

Alexia Putellas headed over on stroke of half time and the game lost its pace after the break. Lyon took their foot off the gas and it was a case of damage limitation for Barca, who only turned professional in 2015.

Hegerberg missed a chance to add her fourth, while Lieke Mertens and Vicky Losada both wasted good openings for Barca before Mertens set up substitute Oshoala in the final minute of normal time.