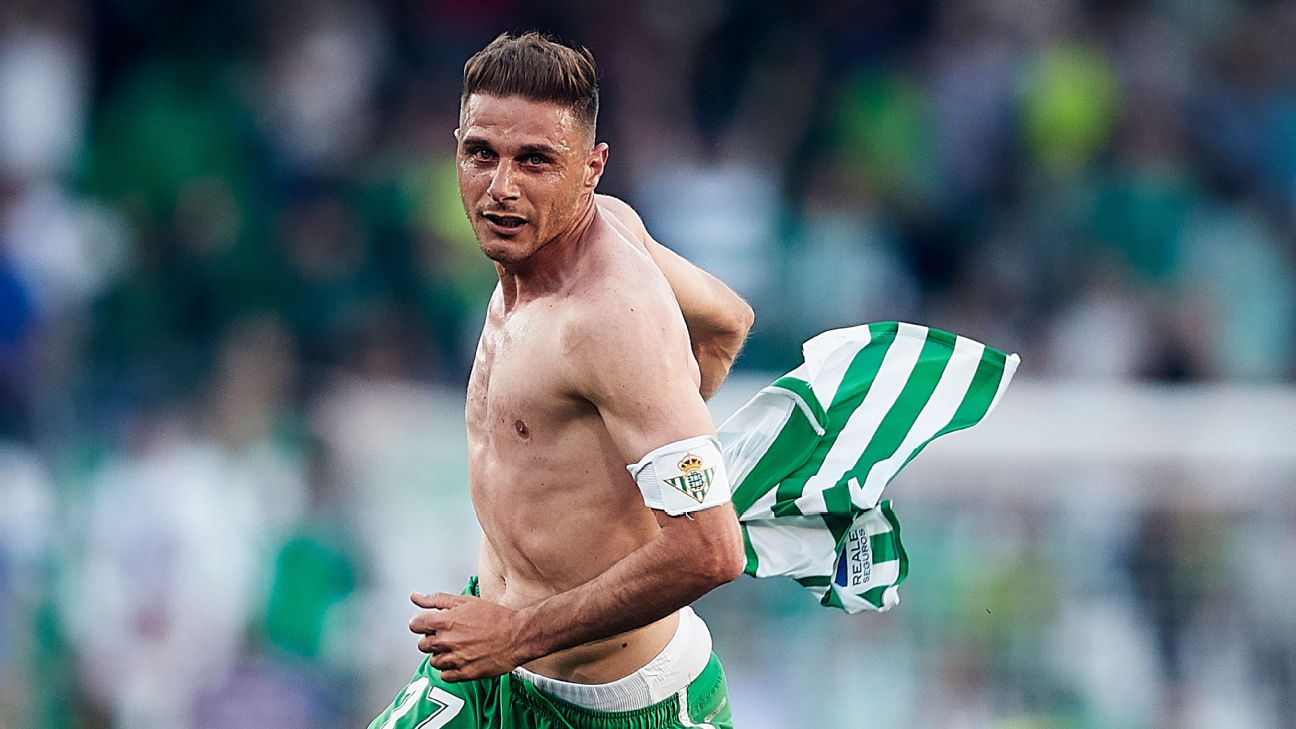 Spain’s penultimate league weekend of the season was so intense, unpredictable, tearful and joyous in almost equal measure that you may well have missed a legend doing something legendary.

Real Madrid were torn apart, humiliated ahead of their season finale against Real Betis. Barcelona wandered their way through the post-Anfield hangover but still managed to almost fatally pierce Getafe’s Champions League aspirations.

Girona crumbled to almost certain relegation despite winning at Madrid this season, drawing with Barcelona at the Camp Nou and eliminating Atletico Madrid from the Copa del Rey — a message to Eusebio and his disdain for 3-5-2: “If it ain’t broke, don’t fix it.”

On the weekend when Pep Guardiola’s Manchester City were winning the title in England, why on earth wouldn’t Real Valladolid’s saviour — given that they are presided over by a guy, Ronaldo, who starred with the City coach in Bobby Robson’s Barcelona of the mid-1990s — be named Guardiola? Okay, Pep is Pep and Sergi isn’t related, but there was a hint of the universe being in harmony, a kiss from kismet.

Diego Godin‘s emotional goodbye, Abdoulaye Ba being brainless again for Rayo Vallecano, Iago Aspas paying further homage to Antonin Panenka in scoring against Athletic — then sportingly consoling keeper Iago Herrerin for leaving him with egg on his face. It was all there, a cornucopia of quality, drama, relief, embarrassment, salvation — an Iberian A to Z of La Liga’s beauty and quality.

But the last goal of Week 37, more than 98 minutes into the sweltering contest between relegated Huesca and dejected, disappointed, ready-to-rebel Real Betis was by light years the best of the round — and easily one of the top two or three goals scored in Spain this season. The legend? Joaquin, born nearly 38 years ago, and the king of kings as far as Los Verdiblancos support is concerned.

The legendary act? Drawing 1-1 against a side who didn’t seem to have waved the white flag, despite their descent into the inferno of Spain’s second division being confirmed some time ago, Betis were about to end their wilting season to the sound of jeers, whistles, boos and potentially the sight of restless natives with pitchforks and lanterns storming the citadel of the Benito Villamarin that night to chase coach Quique Setien out of town.

There had been eight minutes of added time on the display board held up by the fourth official. In a game for which you care with all your heart and your nails are bitten down to your knuckles, you, me, indeed everybody who loves their football team would look at eight minutes as an odyssey — a universe of time in which equalisers, winners or more goals to humiliate a beaten opposition can be scored.

Oh this occasion, eight minutes seemed to the irritable, passionate, hot-headed and long-suffering Betis support as some kind of cosmic joke at their expense. “Mas basura, mas sufrimiento y mas verguenza,” (“More rubbish, more suffering and more shame”) were the kind of sentiments that were rippling around the venerable old stadium where poor old Betis and their aficionados will have to suffer either Barcelona or Valencia lifting the Copa del Rey in a couple of weeks’ time.

Joaquin had already put Los Verdiblancos 1-0 up early in the match with the kind of header that had Marco Van Basten scored it, would have merited anthologies of poetry, portraits hung in art galleries and perhaps a statue or two created in its honour. In doing so, he’d reached 100 professional goals, and 49 for Betis — becoming the 12th-oldest scorer in La Liga history.

Huesca, as is their wont, fought tigerishly and equalised. And that brings us to the 98th minute in nearly 90-degree heat.

This has been a long, emotional, confusing and ultimately bitterly disappointing season for Seville’s “other” club. I say “other” because although they are significantly the dominant outfit in the Andalusian capital in terms of fan base — several years ago, a 70,000-strong demonstration took to the streets to protest how the club was being run, that’s how sizeable and robust their supporter base is. Can you think of another city where that’s happened? Sevilla win significantly more.

Setien has carried the can. The media pulverise him, the fans jeer him, the patience is as thin as was the margin between humiliation and joy in minute 97 on Sunday in the Benito Villamarin. By those metrics, Setien — who’s a clever, mature, sympathetic coach with an intelligent, attractive playing philosophy — should be walking the plank about now.

Spain isn’t known for embracing the theory that projects should be long, that time and restraint are the nourishing elements that can make talent and ideas flourish. The fact that Betis finished in a European place last season (one point off fifth), that they made big progress in the Europa League this season and came within two goals of reaching the Copa del Rey final, all of that is like confetti in a fierce wind as far as the “get him out at any cost” brigade is concerned.

So, back to minute 98, with Huesca already believing that their too-little-too-late campaign was at least going to finish with a draw at one of La Liga’s brand-name clubs.

As a late corner pinballed its way around the edge of Huesca’s penalty area, one of the other successes of this season — and another clear reason why Setien should be given faith — Giovani Lo Celso laid the ball backward into the path of his 37-year-old captain. I’d estimate that Joaquin — the guy who’s renowned as the funniest joker in the history of Spanish football, the guy who claimed that tennis was his favourite other sport in a Q&A for a TV interview when he has never lifted a racket in his life, and the guy who once revealed that he was breastfed until he was six years old — let rip.

The strike was just thunderous, the technique something only belonging to the elite. Later, Marc Bartra would say: “He struck that with all the anger and stored-up frustration each of us have been feeling and building up all season.” It was one of those volleys where the keeper is for decorative purposes only. It was his 50th goal for the club he loves, the club he one day wants to preside over — in elected terms, not just in terms of the love, adoration and worship he enjoys right now.

It was succour for the fans. It gave them something to keep their love warm — although it should be “refrigerated” or “air-conditioned” as a metaphor given that Seville’s summers make “sweltering” seem like a puny word — until August.

A few months ago, Joaquin was asked how long he intended to play. I forget whether his answer was “Until I’m 70” or “Until I’m 80,” but it was something like that. “How can you?” came the follow-up. “Because I have a privileged physique,” answered our hero. And he does, and he showed it as his shirt was whipped off and he roared away in what was more a roar of escaping tension than euphoric joy.

The thing with Joaquin is that he’s the opposite of Jose Mourinho. “The Special One” always used to say that the match begins the day before kickoff, with the news conferences. Joaquin knows, and demonstrates, that the match isn’t finished until he’s appeared in the mixed zone to deploy bon mots. Often they are jokes, cracks at Sevilla’s expense. This time it was common sense. He laid out his manifesto, to the board and to the unruly fans.

“I believe in this coach of ours; Quique has been doing and continues to do very important things for this club and this squad,” Joaquin said. “I believe in this guy, I have done since he arrived, it’s vital to continue to have patience. Some may forget that three or four years ago we were fighting relegation but now we’re upset that we have just missed out on European football. That the coach stays on doesn’t depend on me, but I back him.”

The legend had laid his soul on the line. Players, teams, squads can’t be the ones who dictate whether a manager stays or goes; but legendary captains who bleed green and white and who produce magic, even approaching their 38th birthday, require to be heard.

As magical as his two goals were, I’d argue that the biggest thing Joaquin did for Real Betis was to point their hearts, heads and decision-making powers towards the road of sanity, development and patience. Let them listen. Meanwhile — given that he’s suspended next week — happy summer, maestro.