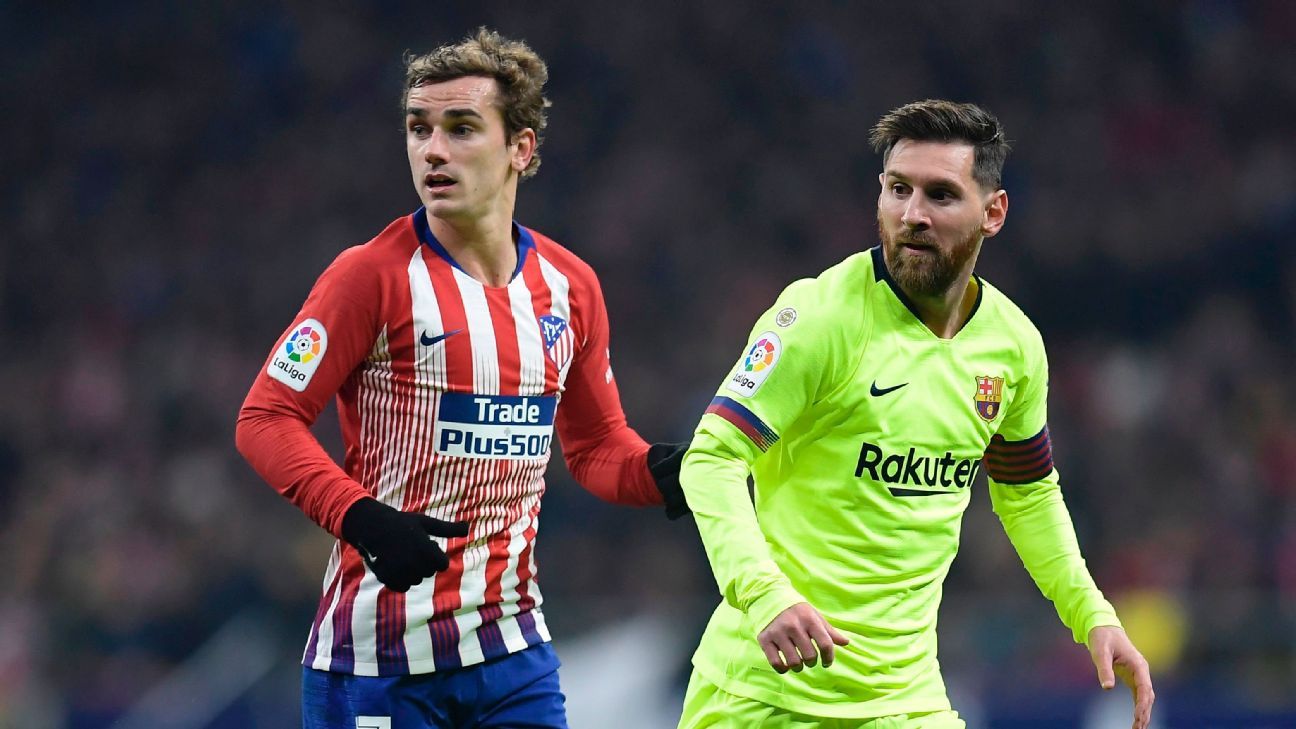 Antoine Griezmann will have plenty of suitors now he’s announced his departure from Atletico Madrid this summer: Manchester United tried hard to sign him in 2017 but need him now more than ever, while he would amplify the trophy chances of PSG, Juventus, Bayern Munich and Real Madrid without any question.

Even if you are cynical about a guy who drew out the “is he or isn’t he?” saga for an eternity a year ago before using the daft “The Decision” video to announce that he wasn’t going anywhere, you have to understand why there will be a queue of the world’s leading clubs now the French World Cup winner is on the market.

However, it would be a big surprise if his final destination was not Barcelona.

While Bayern need a short-term strike partner and long-term replacement for Robert Lewandowski, and United’s misplaced faith in Alexis Sanchez has them looking for new blood, it’s tough to understand why they would be Griezmann’s first choice. Ditto Juve who, despite their dominance of Serie A, don’t look equipped to win the Champions League and may be about to enter a summer of upheaval whether coach Massimiliano Allegri departs or stays.

The likes of Arsenal, Chelsea, Inter and PSG could undoubtedly present their need for the brilliant, hard working, ambitious Frenchman who, until he announced his exit, was loved at Atleti. But Barcelona offer a special package.

If the Catalans are willing to deposit his €130m buyout clause on July 1 and persuade Griezmann to reject other offers, then Messi is jewel in the crown.

To play next to arguably the greatest footballer of all-time, to learn from him, to benefit from his largesse and to accompany him onto the podium to lift trophy after trophy — well that’s a legitimate dream for any elite footballer, not just a guy like Griezmann.

Luis Suarez has been Messi’s best-ever strike partner for a number of reasons. His hunger, total commitment to winning relentlessly, additional goal power, and centre forward play which complements the Argentinian’s need to flit around the spaces which emerge when a No. 9 is on the ball.

Suarez is a hugely intuitive, genuine and generous “amigo” for Messi to play with, but at 32 he’s not getting any younger and his record of failing to score away from home in the Champions League for three-and-a-half years isn’t just atrocious it’s an indication that things will never get better again on that front.

I’d say it’s a good bet that Suarez is off to David Beckham’s Inter Miami FC project in a year at the latest. He’s not going to be offered a new contract and the supreme domestic form we’ve witnessed this season does not suggest that there’s not room for someone to challenge, and eventually replace, him.

Indeed, the way in which Griezmann happily feeds Diego Costa, Alvaro Morata, or even his French international team partners, indicates that there’s a potential dovetail with Messi. Others have tried and succeeded, or failed, to relative degrees — but the evidence is that a Messi-Griezmann axis is, hypothetically, perfect.

But for his “Decision” they could have been playing together this season already. Last summer it was only a massive wave of emotion and loyalty to his then-home, Atleti, the Metroplitano, his great friend Diego Godin, and to Diego Simeone, that made him turn down what looked like a shoo-in move to Camp Nou.

Barcelona had been whispering sweet nothings in the ear of Griezmann’s representative, his sister, and it wasn’t until Atleti surged to their Europa League victory, until Godin cautioned him to be patient rather than rash, and until the rabidly enthusiastic Atleti fans gave him a taste of their potential ire if he should move, did the striker abandon his plans to move north.

But the nectar of Barcelona’s entreaties stayed with him. Atleti may have finished second in La Liga this season but their humiliation in Turin against Juve, being knocked out of the Copa del Rey by (now) relegated Girona and the clear evidence that Los Colchoneros are either in decline or a period of huge renovation — or both — were chastening facts for the ambitious Frenchman to chew on.

The fact that Godin is leaving this summer, for Serie A and Inter Milan, isn’t a coincidence. He was Griezmann’s mentor and his impending absence removed an anchor, something to tie the principal striker to a club where, frankly, it’s just as feasible to suggest that they go a couple of trophyless seasons as it is that Simeone and Mono Burgos put things right with a big summer in the transfer market and a twist of their coaching magic from July onwards.

Having tasted World Cup glory last summer, having won the Europa League and having watched Barcelona do their “close but no cigar” act in the Champions League again, I’d imagine that if Griezmann is not yet fully committed to the Blaugrana then (a) he should be soon and (b) if they miss him again then heads will roll in the Camp Nou offices.

Barcelona have jumped through hoops for a player before, of course. In summer 2006 they’d spent the best part of a year convincing Thierry Henry, Arsenal and the French World Cup winner’s agents that he should move to Camp Nou. But the way in which his then-team, Arsenal, lost the 2006 Champions League final to Barca meant that Henry, in his fury, ripped up the tentative deal.

A year later, he changed his mind. Henry arrived from the Premier League, took a season to acclimatise and, with the arrival of Pep Guardiola as first team coach, played a massive role in Barcelona winning their first Treble — culminating in a Champions League final victory in Rome against Manchester United.

Henry was 29 when he made the move, Griezmann is 28 now and it must be a huge part of Barcelona’s calculations that the Frenchman isn’t just the right age, has the right mentality and the right talents — he’s a guy who’s hungry for bigger prizes and plays in a way which might fit with Messi. They would certainly forgive the embarassment of last summer if the Champions League was returned to Camp Nou once again next season.

As for Atleti — it’s adios, I think, not “see you later.” The club’s fans don’t take it well where heroes leave in any other fashion than Godin just did — retired after honourable duty, moving to another country and walking out the exit door with the feeling that there’s nowhere more special to them than the Majadahonda training ground or the Metropolitano stadium.

Griezmann ending up at Barca would only be trumped if he crossed the city, as Hugo Sanchez once did, and signed for Real Madrid. But I don’t believe he would do that. Real may be on the long list of suitors, but a move to Barcelona seems like a match made in heaven.