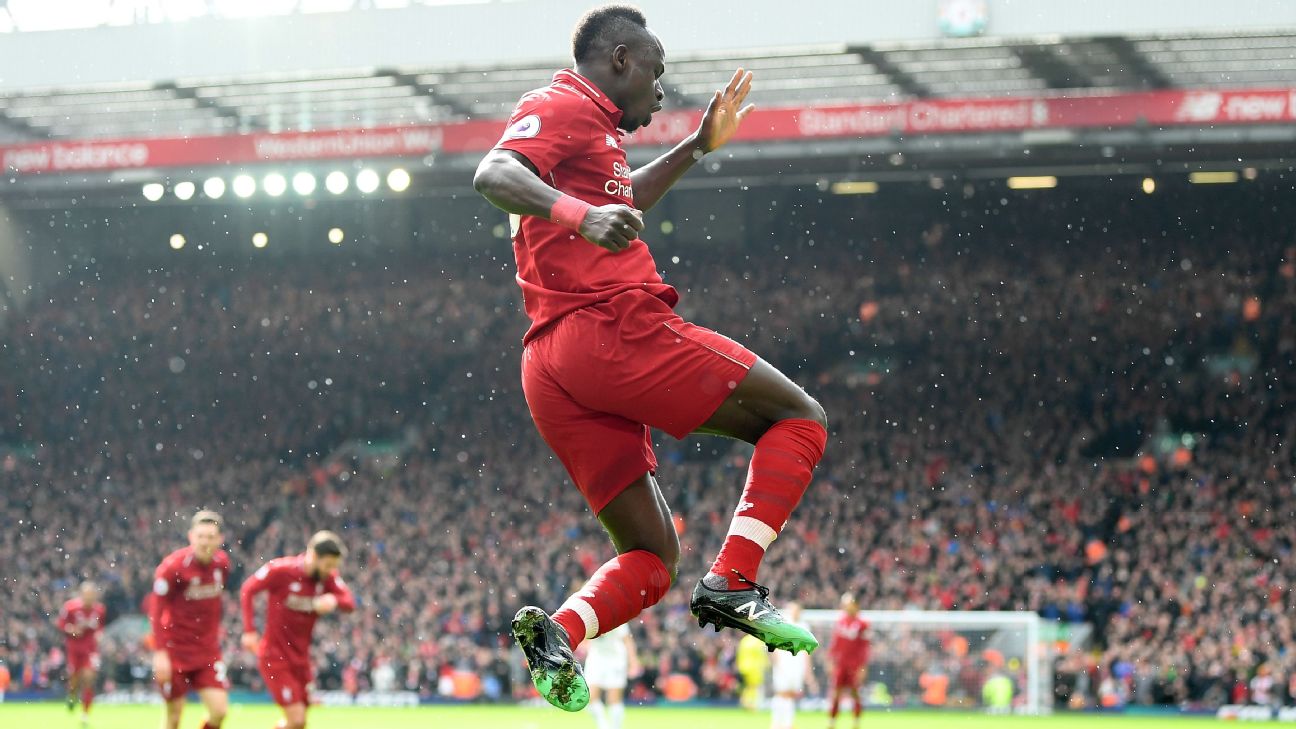 After eight months and 380 matches, the 2018-19 Premier League campaign is over. Here is a bite-size summary of the campaign through 10 games that feature all 20 sides.

– Ogden: Epic title race decided by millimetres
– What you might have missed on Premier League’s final day

The Premier League’s 27th year started with a thrilling, end-to-end contest and a fortunate Manchester United victory which set the tone for their campaign. Although United’s mood right now is anything but victorious, they often managed to win despite playing poorly. Indeed, a run of victories in that manner at the start of 2019 effectively earned Ole Gunnar Solskjaer the United job full-time.

Back in the Jose Mourinho days, United’s opener came from Paul Pogba in typical circumstances: rather than being praised for scoring the penalty, he attracted ridicule for his indulgent, slow-motion run-up. Sure enough, he was United’s best player this season, being voted into the PFA Team of the Year, yet received more criticism than any other teammate.

The winner saw Luke Shaw score his first Premier League goal. The left-back previously made a couple of defensive lapses, and again this foreshadowed his individual campaign: He’s the only United player who improved from last season, but there are still obvious shortcomings.

Leicester, meanwhile, had the game’s brightest creative option in James Maddison, who was excellent on debut and enjoyed a fine first campaign in the top flight. Leicester’s late consolation came from Jamie Vardy, who enjoyed another good season with 18 league goals, and was assisted from the right flank by Ricardo Pereira, another impressive debutant who was voted the club’s Player of the Year.

Throughout this season, it has been difficult to work out what Arsenal are: Do they have a default style, or is Unai Emery a pure tactician who doesn’t care about a Plan A? This was a good example of Arsenal’s curious form at the start of the season. They improved significantly after half-time, and looked more dangerous when they counter-pressed in advanced positions, rather than when building up play for long periods.

Mesut Ozil looked distinctly unhappy when substituted after an hour, setting the tone for a winter in which it seemed Emery couldn’t find a place for him. Alexandre Lacazette and Pierre-Emerick Aubameyang looked disconnected from the rest of the side, yet the former teed up the latter — with his hand — for Arsenal’s second goal. The first had come from Granit Xhaka‘s excellent free kick, though he was deployed in an unfamiliar left-back role and conceded the crucial penalty for Palace’s late equaliser, tripping Wilfried Zaha.

Luka Milivojevic scored twice from the spot here and became the most prolific penalty scorer in a season since another Palace player, Andy Johnson, 14 years ago. That meant Milivojevic finished the season as Palace’s top scorer, which says much about their woes up front.

Ultimately, this was a forgettable campaign for both sides, whose histories and fanbases yearn for bigger and better things. Everton rarely looked like challenging for Europe, and Newcastle never looked like being relegated. Neither was particularly thrilling for the neutral.

This game, which took place on a cold and wet December midweek, typified both sides. Newcastle’s star performers were centre-forward Salomon Rondon, who scored the opener by converting a cross, and goalkeeper Martin Dubravka, who made some fine saves. Everton’s brightest player was Lucas Digne, their only player who deserves even the vaguest mention in “Team of the Season” terms, while Gylfi Sigurdsson was threatening between the lines.

The fact that both sides scored, incidentally, was key — all 20 Premier League sides scored in this round of fixtures, the first time that had happened in eight years — a nice illustration of the Premier League’s goal-per-game rate of 2.82, the highest in its history.

These sides finished 10th and 11th, respectively, yet had completely contrasting seasons. West Ham lost their first four matches and won their final three; Watford did the exact opposite.

With both comfortably midtable, the precise result of this match isn’t important. The crucial detail isn’t that Troy Deeney hammered home a penalty or that Gerard Deulofeu scored a fine second. The key takeaway is that both goalkeepers were absolutely brilliant. Although it’s difficult to compare “top-six” goalkeepers with others because of different responsibilities and opportunities to make saves, there’s an argument that Lukasz Fabianski and Ben Foster were the division’s best two keepers in 2018-19.

Fabianski’s best stop here was a breathtaking reaction save from Abdoulaye Doucoure, and he foiled Deeney with an excellent block. Foster made a miraculous stop from Javier Hernandez and somehow kept out a deflected Robert Snodgrass effort. The expected goals tally here was 4.7, yet the score was 2-0. That speaks volumes.

It has been difficult to make sense of Chelsea’s campaign, which has been characterised by both supporters and players struggling to understand Maurizio Sarri’s methods but also brought a third-place finish and two cup finals.

This game underlined the confusion about Sarri’s preferred starting XI. The first goal was assisted by Callum Hudson-Odoi and converted by Olivier Giroud, two players who spent much of the campaign in Sarri’s back-up XI, starting only in the Europa League. Ruben Loftus-Cheek, another in that situation, assisted the second for Eden Hazard, and the Belgian returned the favour for the third. Hazard has dragged this team to a Champions League spot, and his probable departure for Real Madrid might prove disastrous for a club faced with a transfer ban.

Brighton, meanwhile, attempted just three shots, and manager Chris Hughton substituted all three of his attackers, seemingly unsure of his optimum approach in the final third. For all Hughton’s qualities, Brighton ultimately decided they needed a manager who offered more attacking endeavour and he was dismissed less than 24 hours after the final game of the season.

Wolves’ first campaign back in the Premier League was peculiar: Nuno Espirito Santo’s side caused big sides problems but failed to break down weaker opposition. In that sense, a comfortable win over a relegated side probably isn’t the best summary of their 2018-19.

However, Wolves’ season improved after Nuno moved from 3-4-3 to a 3-5-2 system, in particular because Raul Jimenez and Diogo Jota developed a wonderful attacking partnership, and they demonstrated that here. Jimenez teed up Jota for the opener; for the second, Jimenez crossed for the right for Jota, who chested the ball down and set back to Jimenez for an open goal. Nuno made plenty of changes for this match, but the front two remained in place and won him the game.

Cardiff, meanwhile, battled manfully against the drop with a limited squad, and Neil Warnock made the most of his resources. Their only chances here came from set pieces, particularly through Sean Morrison, a constant threat at dead-ball situations. Ultimately, that wasn’t enough.

Liverpool rarely won matches the easy way. The xG figures here were 4.4 to 0.5, yet it was only in stoppage time that Sadio Mane‘s second goal of the game sealed the victory.

Mane’s first came in typical Liverpool circumstances when Adam Lallana started an attack by steaming into a tackle high up the pitch, demonstrating Jurgen Klopp’s emphasis on counter-pressing. The other two goals were both open goals, scored by Roberto Firmino after Mohamed Salah caused problems. Salah spent much of the season attracting the attention of opposition defenders, which created more space for Mane and Firmino.

But Liverpool were forced to come from behind here — they won more points from losing positions than any other side this season — after Ashley Westwood‘s left-wing corner drifted all the way in. Not only was this evidence of Burnley’s tendency to unsettle opponents with direct football, but the goal was also helped into the net by a strong wind, one of Klopp’s least favourite things about football in England.

On a weekend when Liverpool recorded a 2-1 victory with a 90th-minute goal, Manchester City had their match won within half an hour. That was the story of the title race: While Liverpool had the emotion and the drama, City were cool and collected and denied their opponents many goal scoring chances.

City’s opener was scored by Bernardo Silva and assisted by Sergio Aguero. Then those roles were reversed for the second. While Raheem Sterling‘s impact shouldn’t be overlooked (he was named the Footballer writers’ Association’s Footballer of the Year after all), it was those two who epitomised City in the final third: Silva was named their best player by Pep Guardiola, mixing outstanding technical quality with tremendous work rate, and Aguero enjoyed arguably his most consistent all-around campaign.

Both goals, however, came from dreadful Fulham giveaways in their own third, from Joe Bryan and Timothy Fosu-Mensah, respectively. Throughout the first half, Fulham were constantly playing into City’s pressing traps and conceding possession readily, an apt summary of a dreadful campaign in which their early promise of technical football was undermined by a serious lack of quality in defensive positions and saw them relegated.

Huddersfield were out of their depth and their 2018-19 campaign must be considered alongside Sunderland’s and Derby County’s efforts as amongst the worst seasons the Premier League has seen. They were outplayed here, with a wayward Steve Mounie header their only promising moment.

For Spurs, this game arrived between two Champions League quarterfinal legs against Manchester City, and therefore Mauricio Pochettino made seven changes as he desperately attempted to nurse his players through the final weeks of the season. There were some stereotypical performances from players who started the campaign as outsiders but finished it as vital tactical weapons: Moussa Sissoko was everywhere in midfield, and Fernando Llorente didn’t look convincing in front of goal yet caused a nuisance.

The hero, though, was Lucas Moura, who scored a superb hat trick and looked genuinely emotional after the game as he hailed the supporters with his young son. Sure enough, Lucas scored another brilliant treble against Ajax weeks later to seal a place in the UCL final, again capped by an emotional postmatch television moment.

Most importantly, this Tottenham victory was achieved on a gloriously sunny Saturday lunchtime at their new stadium. For much of the campaign, Tottenham’s football took a back seat as supporters wondered whether their new ground would be ready. It was. It looked magnificent and supporters absolutely loved it.

The campaign has been among the division’s best seasons, not merely because of the quality of the top sides but also because of its strength in depth. Almost every side has had an obvious tactical identity and most have offered entertainment.

This south coast derby was a fine example of the Premier League’s excellence. It was 14th against 16th in terms of final positions, and both sides took the game to the opposition and produced a topsy-turvy encounter.

Two of Southampton’s goals were scored by youth products, James Ward-Prowse and Matt Targett, and it’s clear that coach Ralph Hasenhuttl wants to return to Saints’ philosophy of entrusting academy products. Meanwhile, Bournemouth’s late equaliser was the most fitting goal: It was finished by Callum Wilson and assisted by Ryan Fraser. Those two combined for 12 goals this season, four more than any other pairing.