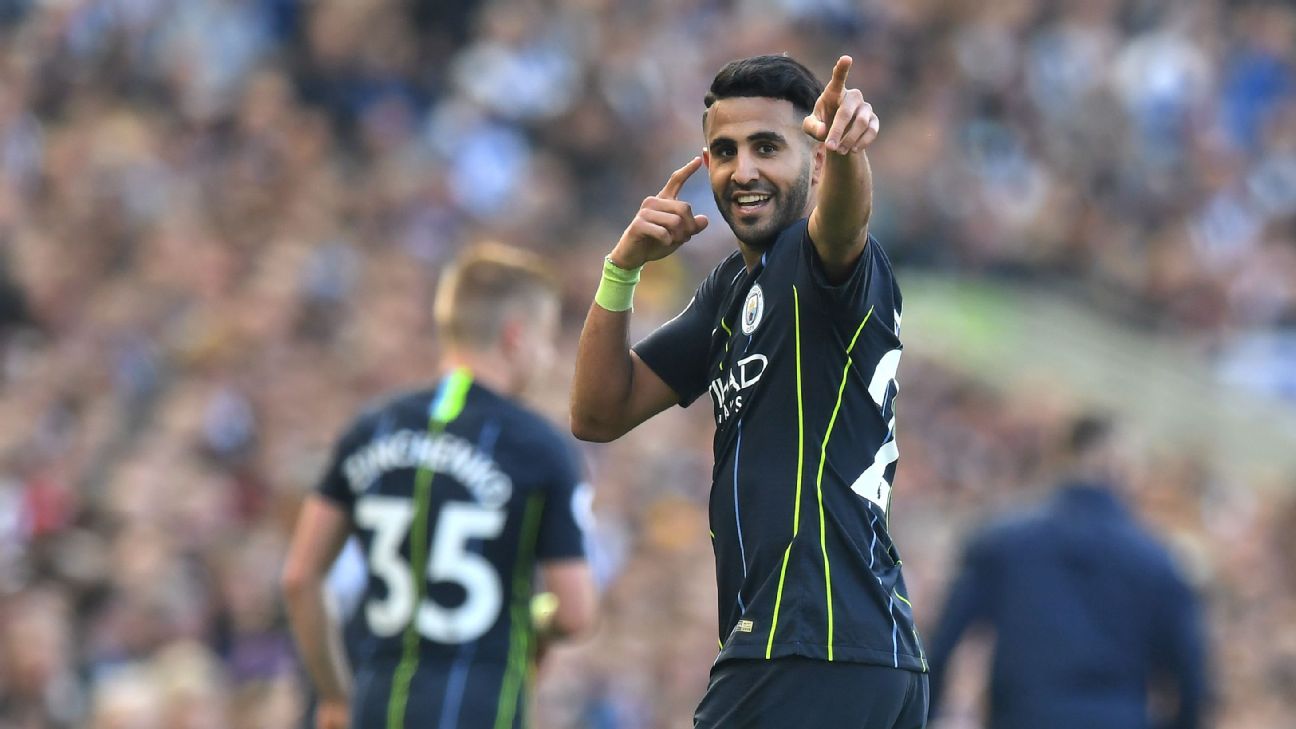 After a frustrating maiden season at City, Algeria’s Mahrez made his mark on the campaign with a stunning strike against Brighton and Hove Albion, as Pep Guardiola’s side clinched the Premier League title.

Mahrez, City’s most expensive signing, was handed a rare – and surprising — start as the league leaders sought the victory they needed away at Brighton to retain their title.

This was only his fourth league start in 2019, and he hadn’t featured at all since playing 89 minutes in City’s Champions League quarterfinal first leg defeat by Tottenham Hotspur on April 9.

If Guardiola’s decision to turn to Mahrez for such a vital game came in the hope that any frustration on the Algerian’s part could be channelled into a decisive performance on the final day, then the coach was thoroughly vindicated, with Mahrez arguably the outstanding player on the day.

First, he contributed the assist for Aymeric Laporte’s 38th-minute goal, as City took the lead after Sergio Aguero had earlier cancelled out Glenn Murray’s opener.

Mahrez won a corner after being denied by Mat Ryan, and duly swung in a fine set piece which Laporte headed down into the Brighton net.

Then, in the 63rd minute, there was a moment of Mahrez magic, as the wideman found a pocket of space outside the area, flummoxed Lewis Dunk with a deft touch, before sending a fine right-footed shot beyond Ryan.

Ilkay Gundogan’s 72nd-minute goal sealed the victory, but by then celebrations were well and truly underway in the blue half of Manchester.

City’s victory rendered redundant Liverpool’s 2-0 home victory against Wolverhampton Wanderers at Anfield, as the Reds made it nine consecutive league wins… in vain.

Mane ended a fine campaign with a double to move level on 22 goals with teammate Salah, who was magnanimous in his praise for City despite missing out on yet another major honour.

“We did everything this season, we only lost one game,” Salah told Sky Sports. “We got 97 points.

“I say congratulations to Manchester City and we will fight again next season for this trophy.”

Aubameyang, who also scored twice as Arsenal defeated Burnley 3-1 at Turf Moor, was happy to end the season on a high note following the Gunners’ recent slump in form.

“I am happy we won, and I am sharing [the award] with two other guys I like,” he told BBC Sport. “My teammates knew about the Golden Boot, I said nothing.

“I did not want them to play and only focus on me. I am a team player.

“The team have had a great season but last month it has not been the best in the league.”

Anglo-Ghanaian wonderkid Eddie Nketiah added the Londoners’ third after coming off the bench, for his first goal of the season, with Alex Iwobi contributing two assists for Unai Emery’s side – his first decisive contributions in the league since early February.

It was a mixed weekend for Morocco international Mehdi Bourabia in Serie A; the 27-year-old opened the scoring for Sassuolo away at Torino – a fine low effort from outside the box which was his first in the top flight since signing from Konyaspor.

The midfielder had already been booked before his 28th-minute opener, and after lifting his shirt over his head in celebration, was shown a second yellow card to end his outing in bizarrely premature fashion.

Torino, who end the weekend only two points off European qualification, have repeatedly demonstrated their resolve this term, and bounced back to win 3-2 after key performances from Nicolas N’Koulou and Soualiho Meite.

Karl Toko Ekambi was recently named in Clarence Seedorf’s provisional Cameroon squad ahead of the Africa Cup of Nations, and maintained his fine recent form with the only goal of the game as Villarreal defeated Eibar to secure their La Liga safety for next season.

The attacker now has six goals in his last nine games in the Spanish top flight, while Yassine Bounou‘s Girona are on the brink of relegation after a 2-1 home defeat by Levante.

Djene Dakonam‘s Getafe suffered a setback in their quest for an unlikely Champions League qualification, when they were beaten 2-0 away at a Barcelona side who were forced to endure the heckles of their own fans after their midweek capitulation at the hands of Liverpool.

With one game to play, Getafe remain level on points with fourth-placed Valencia, and will need to beat Los Ches’ result when they face Villarreal at home on Saturday.

In France, LOSC Lille took a step towards second place – and the Champions League group stage – with a 1-0 victory over Girondins de Bordeaux. Star man Nicolas Pepe had a quiet afternoon, although he did provoke a red card from the visitors’ Pablo late on.

Guingamp reached the end of the road with a 1-1 draw away at Stade Rennais, condemning them to relegation. Lebogang Phiri, Jordan Ikoko and Alexandre Mendy were all in action for the visitors.

Eintracht Frankfurt’s own hopes of qualifying for the Champions League were dented as they were undone by two goals from Mainz’s Anthony Ujah, which secured a 2-0 victory.

The Nigeria international scored twice in four second-half minutes to compound a bad week for Eintracht, who missed out on the Europa League final after a penalty shootout defeat in their semi-final second leg against Chelsea on Thursday.

There was also joy for Ivorian veteran Salomon Kalou, whose purple patch continued with two goals in the last 15 minutes for Hertha Berlin as they came back from 3-2 down to win 4-3 at the death.

The 33-year-old, who scored his sixth goal of the campaign last weekend as Hertha defeated Stuttgart, netted a 93rd-minute as the capital club took all three points on Saturday to extend their undefeated streak to four games.