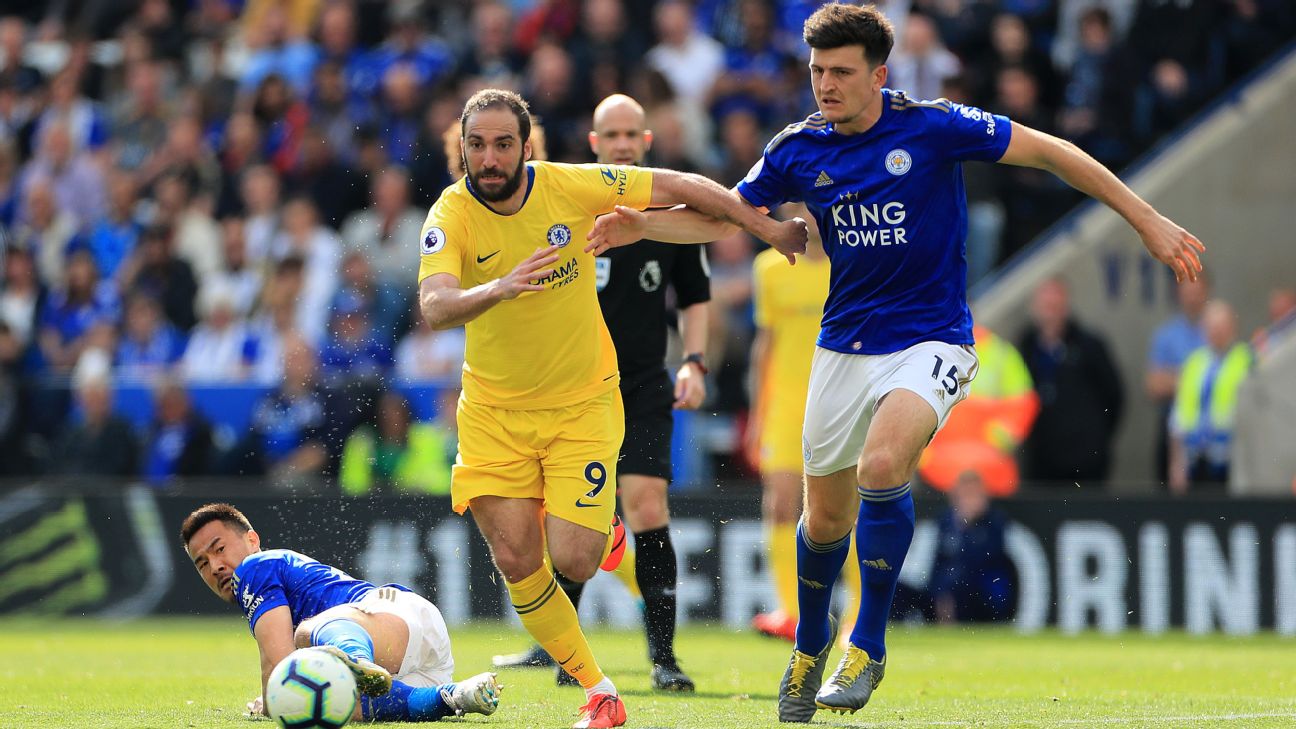 LEICESTER — Chelsea sealed third place in the Premier League with an underwhelming 0-0 draw against Leicester City at the King Power Stadium, while Eden Hazard was unable to provide a match-winning contribution on perhaps his final appearance in English football.

Ruben Loftus-Cheek continued his late-season form and showed no ill effects from the cramp that forced him off against Eintracht Frankfurt in midweek. This game offered little else to shout about, but Chelsea remarkably finish a roller-coaster season as London’s top club.

– Who qualifies for Europe from Premier League?

Gonzalo Higuain ended his unfulfilling six-month spell in the Premier League with a desperately listless display, and it’s difficult to know where the goals will come from against Arsenal in the Europa League final if Hazard doesn’t produce an individual masterclass in Baku.

6 — Maurizio Sarri wisely opted to rest Hazard with a top-four place already assured, but gave the travelling Chelsea fans something to cheer by bringing on the Belgian in the second half. It’s a pity though that he couldn’t find room to give academy youngster Marc Guehi a senior debut, having included him in the squad.

GK Willy Caballero, 6 — On what might prove his final Chelsea appearance the veteran Argentine backup goalkeeper was relatively untested and generally solid. His kicking, one of the weaker aspects of his game, created no real problems and he commanded his area nicely.

DF Davide Zappacosta, 6 — In his first Chelsea start in two months, he did pretty well, darting forward regularly and causing panic in the Leicester defence with some of his crosses. Had trouble running the other way against the lively Ben Chilwell, though, and his attacking threat waned as the game wore on.

DF Cesar Azpilicueta, 6 — Leicester didn’t have the aerial threat to exploit his lack of height at centre-back, and aside from one slip, he didn’t often encounter the speed of Jamie Vardy. Passed safely under pressure and scrambled well a couple of times as the home side surged forward.

DF David Luiz, 6 — Celebrated his new two-year contract with some vital interceptions to preserve Chelsea’s clean sheet, most notably poking away Chilwell’s cutback with Leicester players queuing up to score. His slip granted Vardy a free run at goal, but that was the only error in a decent display.

DF Marcos Alonso, 6 — Looked a little fresher and faster than he has for most of this season, and should have gotten an assist with a precise low cross that an unmarked Higuain somehow managed to bundle wide. Wasn’t greatly troubled by Marc Albrighton or Ricardo Pereira.

MF Ross Barkley, 6 — Carved open the Leicester defence with a perfect run onto Jorginho’s pass, only to hammer his shot straight at Kasper Schmeichel. Fired another left-footed effort wide, but overall he didn’t look to get into the penalty area enough. He was also loose with the ball at times.

MF Jorginho, 6 — A little sloppier with his passing than usual and at times Leicester’s pressing unsettled him, but he had plenty of good moments too. Barkley’s miss from his brilliant pass in the opening minutes underlined how unfair it is that he’s failed to register a Premier League assist this season.

MF Ruben Loftus-Cheek, 7 — Chelsea’s most dangerous player. Took every opportunity to lead promising attacks with driving runs through midfield and picked out sensible passes in the final third, though his teammates too often failed to capitalise on them. Didn’t manage to test Schmeichel himself.

FW Pedro Rodriguez, 5 — Always catches the eye with his work rate and his passing was better than in a nightmare display against Eintracht Frankfurt. Couldn’t get anything done in the final third though, and rarely seemed on the same wavelength as his fellow attackers.

FW Gonzalo Higuain, 2 — Too slow to press, too passive to hold the ball up, too sloppy to link play. This was another torrid performance, capped by a horrendous miss when he was found unmarked by Alonso’s low cross shortly before half-time. He’s given Chelsea no reason to want him back next season.

FW Willian, 6 — Had some joy early on cutting in from his favoured left flank, stinging the palms of Schmeichel with one low shot. That was pretty much the extent of his goal threat. His most notable contribution was at the other end, surging back to help foil Vardy after Azpilicueta and Luiz had slipped.

FW Eden Hazard, 6 — His introduction was greeted with great fanfare but he cruised through the final stages of this game, rarely looking likely to provide a breakthrough. Couldn’t quite control one Loftus-Cheek pass in the box and did not get the penalty he was seeking.

MF Mateo Kovacic, NR — Provided fresh legs when he was brought on for Barkley in the 76th minute.

FW Olivier Giroud, NR — Much more threatening than Higuain in the final six minutes as he tried to get on the end of several crosses, to no avail.