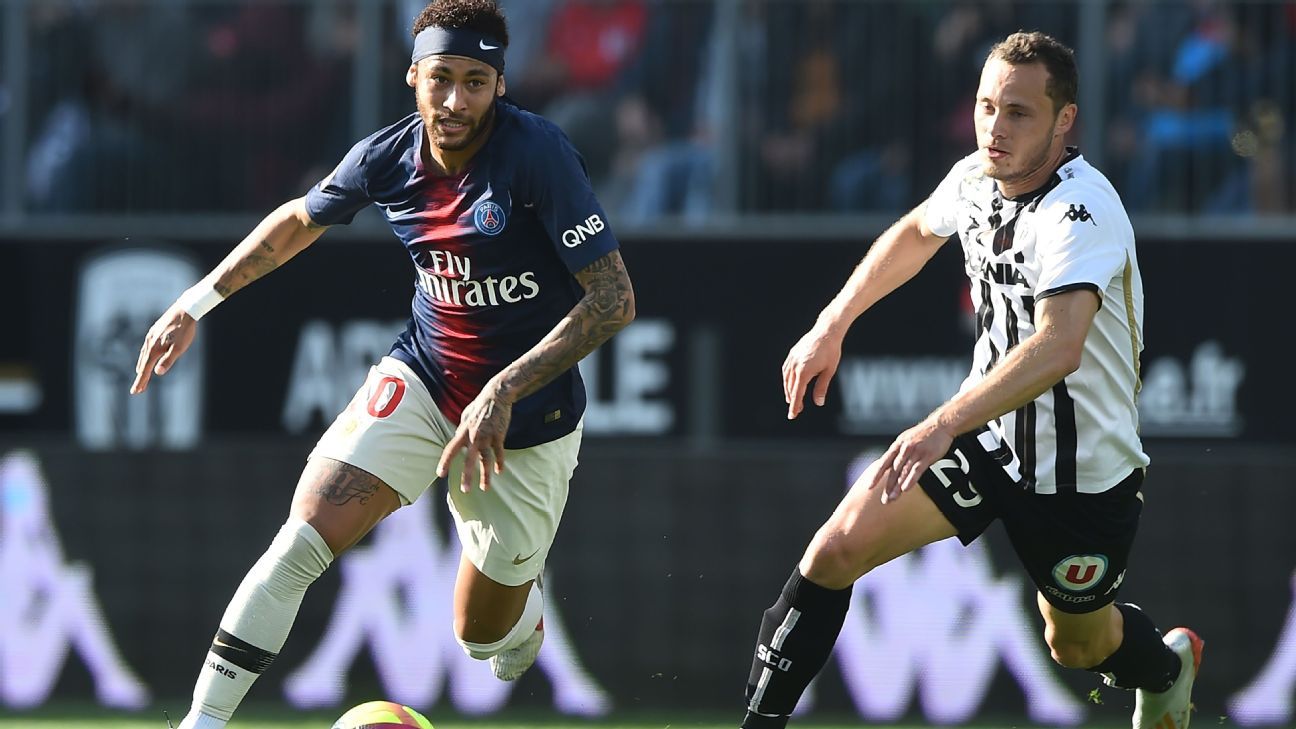 Playing likely his final match this season in the French league, Neymar scored and delivered an assist as Paris Saint-Germain beat Angers 2-1 Saturday to shake off its season-end slump.

Neymar put PSG ahead with a diving header in the first half and then set up Angel Di Maria’s goal in the 58th minute. Flavien Tait pulled one back for the hosts from the penalty spot two minutes from time after PSG defender Marquinhos was sent off for grasping forward Wilfried Kanga round the waist.

Neymar was this week given a three-game ban — which starts Monday — for lashing out at a fan following a loss to Rennes on penalties in the French Cup final. The French football federation’s disciplinary commission added a suspended two-match ban to its punishment.

PSG and Neymar have announced they will appeal the ban, which rules him out of his team’s last two games this season. The Brazil forward will also miss the Champions Trophy between the French champions and the French Cup winners on Aug. 3 if PSG’s appeal is unsuccessful.

Already crowned champion, PSG had managed just one win in their last seven games in all competitions ahead of Saturday’s trip to western France, and had failed to win their last three matches.

Under a bright sun, Thomas Tuchel’s team did not impress but the result came as a relief.

“We did not play well these past few weeks, it was important to win,” Di Maria said through a translator. “The mindset was better too.”

PSG dominated possession early on but only managed to create half-chances at a pedestrian pace.

Angers were more inspired and had an excellent chance to break the deadlock in the 16th minute when Stephane Bahoken found some space between two defenders to connect with a cross from Tait. Alone in front of PSG ‘keeper Gianluigi Buffon, Bahoken timed his shot well but the former Italy international made a superb reflex save.

Against the run of play, PSG took the lead four minutes later after Angers players gave the ball away and failed to track back. PSG launched a quick attack and Dani Alves’ chipped cross inside the box found Neymar, who scored his 34th league goal with a fine header.

Neymar turned provider near the hour mark following a series of dribbles down the left. The former Barcelona player then crossed the ball back to the unmarked Di Maria, who headed it home.

Behind PSG, Lille have already likely secured an automatic place in next season’s Champions League. The northern side has a six-point lead over third-place Lyon ahead of Sunday’s home match against Bordeaux. Lyon travel to Marseille.