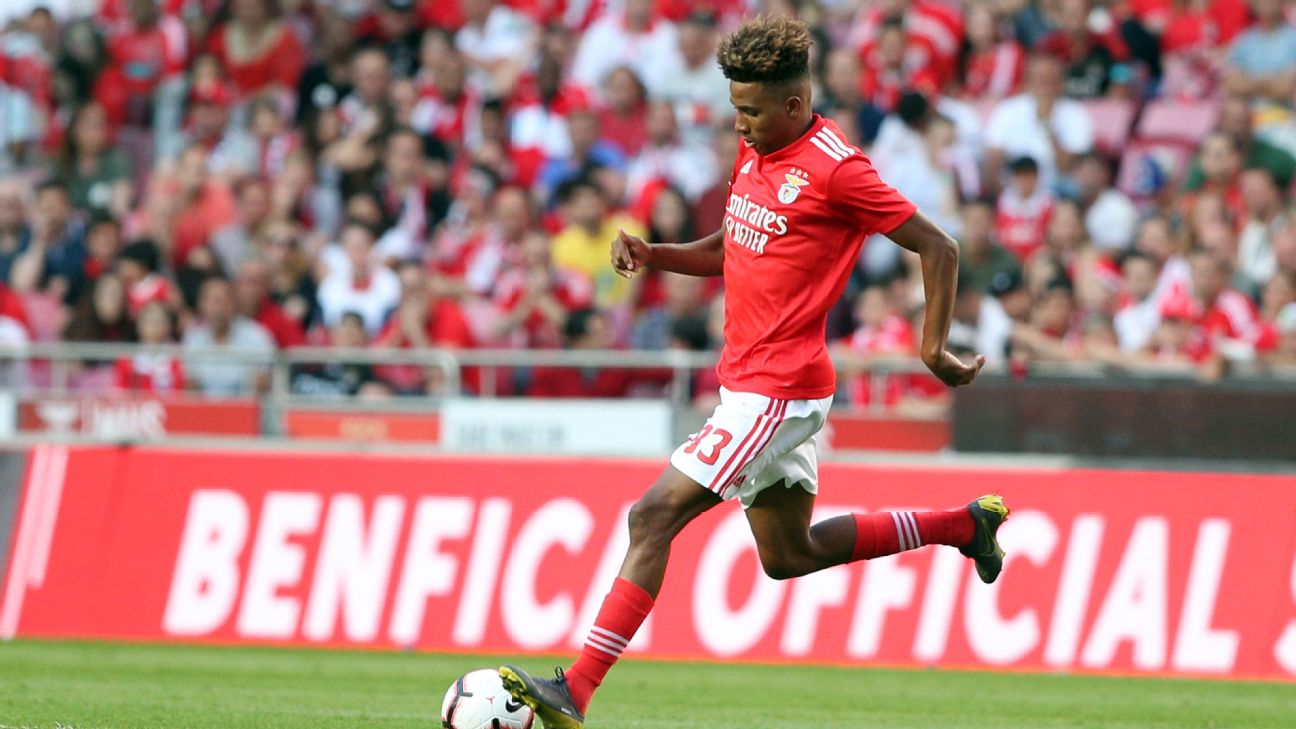 With the transfer window for Europe’s biggest clubs set to open soon — find out when the transfer window opens and closes across Europe’s top leagues – rest assured that Transfer Talk is scouring the world’s media and setting correspondents loose to see what is on the agenda. You can click here to review all the latest transfers.

Tottenham Hotspur have become the latest Premier League side to register an interest in rising Benfica star Gedson Fernandes, according to reports in The Mirror.

Spurs boss Mauricio Pochettino has been told by chairman Daniel Levy that he will have substantial funds to spend on the squad this summer, and the Champions League finalists have made a big play for the 20-year-old midfield enforcer.

Representatives of the two-cap Portugal international were in England last week for discussions with potential suitors, and reports claim that those include Manchester United, as well as Spurs’ Champions League final opponents, Liverpool.

A fee of around £35 million is thought to be required to secure a deal for Fernandes, and Spurs will look to raise funds for further purchases by selling Kieran Trippier and Victor Wanyama, with the future of several other fringe players in serious question.

10.03 BST. Brexit and football, never a good mix. But are the Premier League sides aware of what’s going to happen?

The Guardian report that Whitehall is worried “some clubs are not alive to the changes, which will mean European players lose the automatic right to come and play for British sides” and that a summit was held last week between the Home Office and football authorities to talk about the issues faced when the new immigration regime is used in January 2021.

The German midfielder’s representative, Dr Erkut Sogut, has been speaking about his future and insists the star will stay until 2021 when his deal expires.

“Rumours will always persist, — there is no doubt about that — but one thing I can guarantee is Mesut’s loyalty,” he told Turkish-Football.com. “His mind is focused on Arsenal, and Arsenal only. Mesut bleeds Arsenal red, and respecting his contract is a certainty.”

09.00 BST: Fulham striker Aleksandar Mitrovic won’t fancy playing in the Championship, so Southampton are planning a £30m summer move to land him, say the Daily Express.

Reports in The Sun claim Manchester United are leading the race to sign another highly-rated Benfica player — centre-back Ruben Dias. But the Old Trafford club have now been told that it will cost £52 million to sign the youngster.

The 21-year-old has been capped nine times for the Portugal national side, and has earned rave reviews since making his debut for the country’s league leaders back in 2017.

Dias joins colleagues Fernandes (mentioned above) and Joao Felix in the list of Benfica academy graduates that have been linked with a move to United this year, and a move for a defender is high on Ole Gunnar Solskjaer’s to-do list as he seeks to revamp his backline.

In addition to a potential move for Dias, the Red Devils boss is looking to shift Eric Bailly and Marcos Rojo, who have both found themselves out of favour since the Norwegian took charge at the back end of last year.

Everton forward Richarlison could be set for a big-money move this summer, with The Mirror claiming Paris Saint-Germain and Atletico Madrid are interested in the Brazilian.

The 22-year-old only joined the Merseyside outfit a year ago for around £40 million from Watford, but after a successful first season at Goodison Park, it appears two of Europe’s elite clubs have come calling, with a £70 million fee being quoted.

Lack of European football has not stopped Richarlison from breaking into the Brazilian national team setup, but with regular Champions League football on offer in both France and Spain — as well as a big salary increase — the pacey striker could be tempted by a move.

Atletico’s interest comes as rumours persist regarding the future of star forward Antoine Griezmann, who continues to be linked with a move to Barcelona.

– Spurs forward Fernando Llorente is set to leave the club on a free transfer this summer, with The Sun claiming the north Londoners are already in the process of sounding out fresh backup options for star striker Harry Kane. Serie A side Napoli are early frontrunners to sign 34-year-old Llorente.

– Monaco and Porto are interested in a move for out-of-favour Inter Milan midfielder Joao Mario. The former West Ham loanee has endured a difficult three-year spell at the San Siro, and Calciomercato claims he is set to be sold as part of plans for a major summer overhaul for the Nerazzurri.

– The Sun claims Bournemouth winger Jordon Ibe is on the summer wish list of Leicester City manager Brendan Rodgers. The pair worked together during their time at Liverpool, and Rodgers is keen for a reunion with the 23-year-old, who has just over a year remaining on his contract with Eddie Howe’s Cherries.