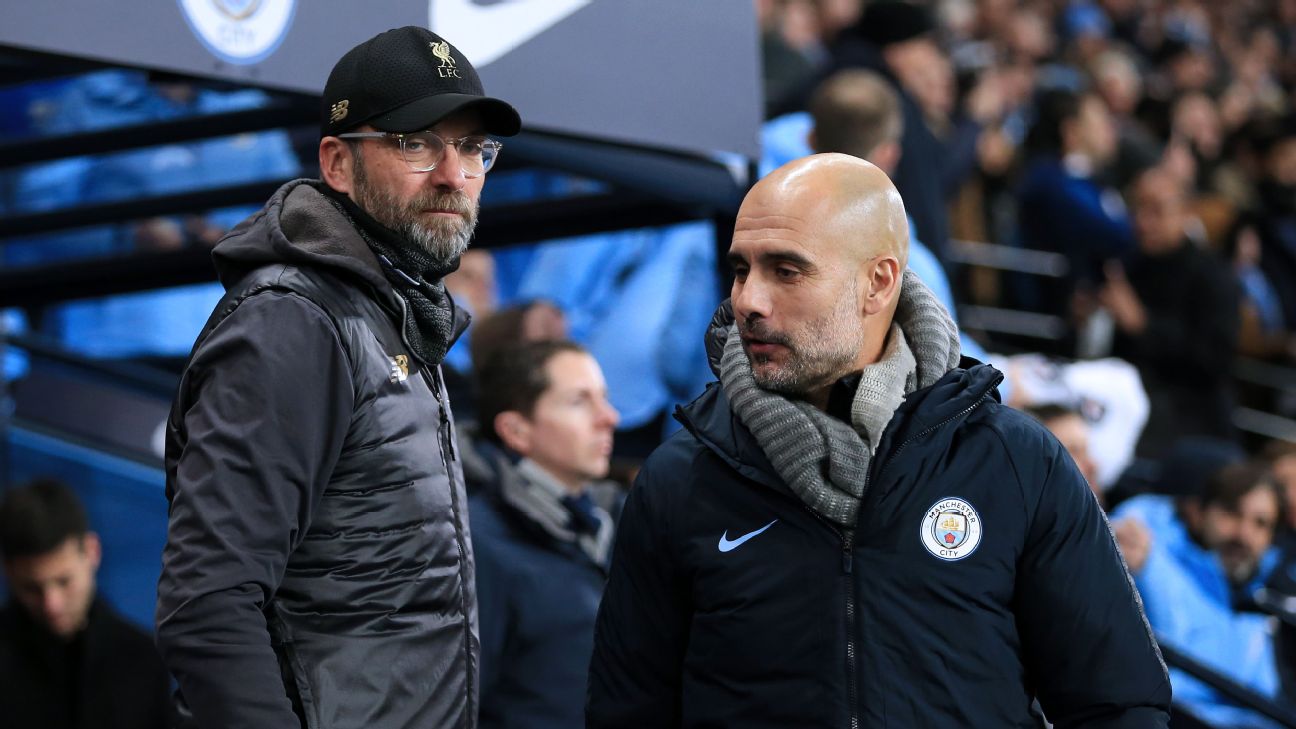 The end of the Premier League season is upon us and barring something extraordinary with the Champions League places, there is just one meaningful thing left to decide. And boy, is it meaningful: Manchester City go into their trip to Brighton a point ahead of Liverpool, who face Wolves at home, therefore knowing that a victory will guarantee the retention of the title.

These two sides have more or less been playing a different sport than the rest of the division this season, and will finish at least 20 points ahead of their nearest challengers. So let’s look at how their campaigns compare, going into the final day.

Let’s start with the basics: Manchester City have 91, Liverpool 87. Mohamed Salah is the biggest proportionate contributor, his 22 strikes representing around 25 percent of Liverpool’s league total, but Sergio Aguero and Raheem Sterling are just behind him: they have 20 and 17 respectively, chipping in 41 percent of City’s tally between them.

City like to be on the front foot, too: they’ve scored the first goal in a whopping 83 percent of their games, with Liverpool trailing (just 68 percent) and the rest of the division in the dust. However Liverpool are your team if you want late drama: 24 of their goals have come after the 75th minute of games, the most in the division by a distance. (Chelsea are next with 19, while City have 13.)

Both sides are fond of an old-fashioned thumping, too: they’ve each won by four or more goals on six occasions, and have only failed to score four times between them, two of which are accounted for by the 0-0 draw at Anfield in October.

If at first you don’t succeed, shoot again

It goes without saying that these two sides have scored the most goals in the Premier League this season but it’s also a lot to do with their overall style of play. City have taken 662 shots for those goals but Liverpool’s total is exactly 100 fewer, meaning they score once in roughly every six attempts as opposed to City’s once every seven.

Analytic-phobes look away now but City are more or less matching their expected goals (xG) projection, which is 91.5, while Liverpool are outperforming it: their xG is 77.8.

Stingy at the back

Both teams have conceded an impressively miserly 22 goals; if both teams keep it tight on Sunday, it’ll put them level for third in the Premier League’s all-time best defences, alongside Manchester United in 2007-08 and Chelsea in 2005-06, and behind the 17 that Arsenal conceded in 1999 (when they finished second) and Jose Mourinho’s first season at Chelsea in 2005, which saw them let in a remarkable 15.

Furthermore, both sides are outperforming their xG against, which stands at 25.14 for City and 28.26 for Liverpool. It’s not just for their kicking and play out from the back that Ederson and Allison are considered two of the best goalkeepers in the world.

It’s a slight curiosity that both teams spent north of £50 million on players last summer who have been relatively peripheral, with Naby Keita and Riyad Mahrez combining for just 29 league estarts between them.

The two team’s most frequently used first XIs cost plenty, but it’s no surprise that City’s cost more. With the caveat that reported transfer fees are often tough to be 100 percent accurate, City assembled theirs for a total of £422.4m, while Liverpool’s set them back £289.8million, nearly half of which — £141.8m — went on Alisson and Virgil van Dijk, also featuring two free transfers (Joel Matip and James Milner), an academy product (Trent Alexander-Arnold) and two players purchased from relegated sides (Andrew Robertson and Georginio Wijnaldum).

Second place is the first loser?

With the clubs on 95 and 94 points respectively, whoever finishes second will have the biggest points total for any runner-up in English top flight history. The Manchester United side that got 89 points but lost the title on goal difference to City in 2011-12 currently holds the Premier League record, just ahead of the 86 Liverpool and Tottenham got when finishing second in 2009 and 2017. To delve into the archives, the only real comparable figures — when adjusted for a 38-game season with three points for a win — are Middlesbrough with 83 in 1902 and Leeds United with 82 in 1971.

Real Madrid still hold the record for the top five leagues in Europe, when Manuel Pellegrini’s side finished on 96 points but still finished behind Barcelona (99) in 2009. Another current Premier League manager, Maurizio Sarri, guided Napoli to 91 points last season but trailed Juventus.

Is there still some drama ahead?

It sounds wild but there could be a twist ahead. The two sides could finish level if City lose to Brighton and Liverpool draw with Wolves. Even then, City would probably still win the title on goal difference, but consider this: if it’s a 4-4 draw at Anfield and City lose 4-0, the teams would finish on the same points, the same goal difference, the same goals scored and the same goals conceded. Thus, a single game play-off would be required to decide the champions.