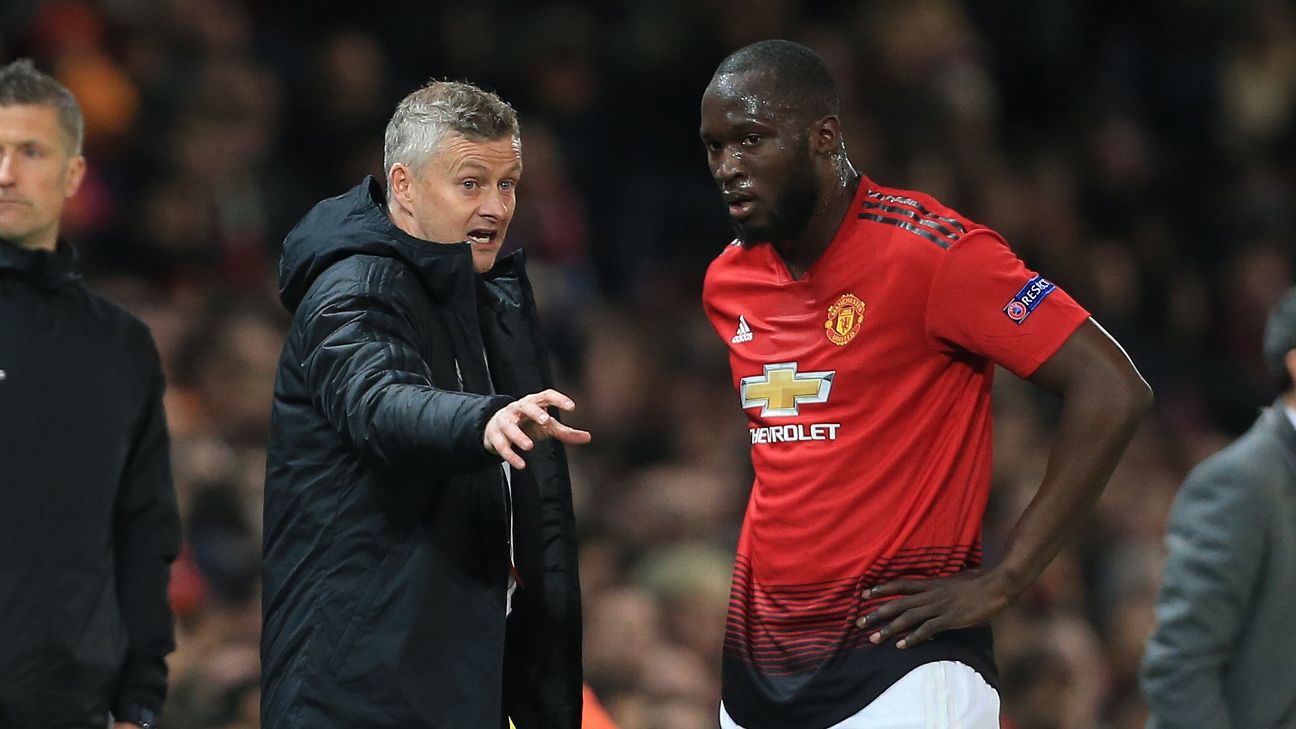 With the transfer window for Europe’s biggest clubs set to open soon — find out exactly when the Premier League transfer window opens — rest assured that Transfer Talk is scouring the world’s media and setting correspondents loose to see what is on the agenda. You can click here to review all the latest transfers.

Romelu Lukaku will need to explain where he sees his future in a meeting with Manchester United boss Ole Gunnar Solskjaer, which is expected to take place next week, according to the Sun.

The United manager hasn’t got his heart set on selling the Belgium international at present, but wants to know Lukaku’s thoughts on the situation.

In a disappointing end to the season for the Red Devils that has seen them fail to qualify for next season’s Champions League, Lukaku failed to score in his last eight games in all competitions, a run which included a defeat to Wolves and a heavy 4-0 loss to Lukaku’s former club, Everton.

He cost £75m, rising to £90m, when United signed him from Everton in 2017 but United may feel they haven’t got much from that huge investment and have been linked with moves for Juventus’ Paulo Dybala, PSG striker Edison Cavani and Atletico Madrid’s Antoine Griezmann.

Marca reported this week that Neymar could return to La Liga and sign for Madrid and that James Rodriguez could be his replacement at PSG. Neymar began his professional career at Santos before leaving the Brazilian club for Barcelona in 2013.

Speaking of transfer speculation, Peres told Oglobo Esporte: “The issue of Neymar for example. I saw today an interview on Marca and they claimed the possibility that Neymar negotiating a transfer to Madrid is big. In that negotiation we would have a four percent stake as the club that formed the player. It [the transfer] would be a good business for us also. All the money is welcomed.”

15.01 BST: Julian Speroni has left Crystal Palace after 15 years. The goalkeeper is a club legend.

14.35 BST: Antoine Griezmann‘s name tops Barcelona’s list of attacking transfers in the summer but the club are keen not to create a saga in order to avoid issues with Atletico Madrid, sources have told ESPN FC.

Griezmann is part of a list of summer transfer targets which include Arsenal’s Alexandre Lacazette, Everton’s Richarlison and another unnamed forward. However, the La Liga champions won’t make any move for Griezmann until July 1 when his buy-out clause reduces from €200m to €120m.

14.07 BST: Andriy Shevchenko, interviewed by DAZN, has said that “one day I would like to manage AC Milan.”

Milan are reportedly looking for a replacement for Gennaro Gattuso with Maurizio Sarri, Antonio Conte and Marco Giampaolo linked. But would they hire their former striker turned Ukrainian politician?

“I’ve got a really strong bond with the club and the fans,” he said. “Now almost all of my former teammates are coaching and a lot have already coached Milan — maybe it will be my turn one day.”

It’s not likely to be the near future though, as he added: “I’ve already got a job, on the bench of the [Ukraine] national team, even if Milan are part of my life, but right now I’m busy.”

13.22 BST: Dortmund chief Michael Zorc has revealed the future of injured full-back Achraf Hakimi, who is on a loan from Real Madrid until 2020. Zinedine Zidane reportedly wants him back at the Bernabeu this summer, but Zorc said: “No. I can rule [a Hakimi return to Real this summer] out. His agent visited us last week. I read Achraf’s interview too. Achraf will be back in Dortmund tonight. He wants to support the team, and it shows just how well he feels here. He wants to play the Africa Cup of Nations in the summer, and he’ll be with us again in July.”

13.03 BST: Filipe Luis could follow Diego Godin and announce his exit from Atletico Madrid in the coming days. AS claim that the left-back is ready to leave on a free transfer once his contract expires.

12.45 BST: Eden Hazard wants his desired summer move to Real Madrid finalised as soon as possible but Chelsea are determined not to sell him for below his market value, sources have told ESPN FC.

Reports in Spain have claimed that Madrid want to unveil Hazard — who is set to make his final Stamford Bridge appearance as a Chelsea player against Eintracht Frankfurt on Thursday — on June 2, the day after the Champions League final, as they attempt to shift supporter focus from a disappointing season to their summer rebuild.

Hazard has privately made it clear that he expects to be allowed to join Madrid this summer, and sources told ESPN FC that he and his family have already begun looking into housing and school options in the Spanish capital.

Leverkusen triggered a release clause in the €30m region and convinced the midfielder to leave TSG Hoffenheim after three years. He had briefly been linked with a switch to Premier League in recent weeks.

“It’s the next step after three really fantastic years at TSG,” Demirbay said after putting pen to paper on his new contract.

10.30 BST: Mandela Egbo is set to leave Borussia Monchengladbach after failing to break through into the first team, the Bundesliga side has confirmed to ESPN FC.

The 21-year-old former England youth international joined the German club in 2015, but largely featured for the club’s U23 in the regional fourth division. He played 10 minutes for the senior team in February 2018 in a 1-0 win at Hannover. But after receiving call ups to the Bundesliga squad in the next five matches, returned to the U23 for whom he made 24 appearances this term.

Fernandes, who has scored 31 goals in 50 games for Sporting this season, is on the list of targets along with Atletico Madrid’s Saul Niguez but United will have to beat competition from City to land the 24-year-old.

City have been heavily linked with a move for Fernandes, who is rated at around £50m, but sources have told ESPN FC that Pep Guardiola’s side will not do any business until after the FA Cup final on May 18.

09.42 BST: Cadena Cope claim Real Madrid coach Zinedine Zidane has told midfielder Luka Modric he is counting on his services for next season.

Modric has one year left on his contract with Madrid, but the club have yet to confirm the reports that the Croatia captain agreed to a one-year contract extension after winning the Ballon d’Or earlier this season.

08.57 BST: Yahoo Sport France are reporting that PSG have opened negotiations with Lille for Nicolas Pepe.

Pepe looks set to leave the club if an offer of €50m is produced, but Arsenal, Liverpool, Man United and numerous other clubs have been linked with the forward.

The Spaniard is out of contract with the Red Devils at the end of the season and is expected to leave. According to reports in Spain, United tried to get Herrera to sign a new contract and almost equalled the offer the 29-year-old has received from PSG, which is around €8m per season.

However, PSG have evidently convinced Herrera to leave the club he joined in 2014 from Athletic Bilbao. Cadena Ser claim Herrera could bid farewell to his United teammates by next week and announce his departure to PSG.

Navas wants to stay at Madrid despite squad role

Keylor Navas is ready to fight for his place at Real Madrid, despite speculation that he had been offered to Manchester United, the Sun reports.

The Costa Rica keeper has fallen down the pecking order at Madrid after Thibaut Courtois grasped the No. 1 jersey and, with David De Gea‘s future at Old Trafford up in the air, there had been rumours that Navas could take his place.

That may no longer be the case, as Navas is determined to stay at the Bernabeu and fight to become the first-choice goalkeeper again. He might not have it all his own way though, as reports suggest that Madrid may look to use him in a player plus cash deal to sign Paul Pogba from United in the summer.

Commenting on that scenario, Madrid boss Zinedine Zidane said: “We’ll see at the end of the season who goes and who stays. I didn’t say anything about us signing Pogba. I’m not going to say anything until things are done.”

Alexis Sanchez‘s future could be in Italy, according to Calciomercato. The Italian outlet reports reports that Inter Milan and Juventus are keeping tabs on the 30-year-old.

With rumours circulating that several players from Solskjaer’s side could be shown the exit door this summer, Sanchez may well be one of them if he gets offers from clubs who are in Europe’s most prestigious competition.

Sanchez’s agent was reportedly at AC Milan’s 2-1 win over Bologna at San Siro on Monday night, but was there to speak to the Rossoneri’s crosstown rivals, Inter. Juventus are understood to be less keen at present given the Chilean’s substantial wages.

Chelsea midfielder Ruben Loftus-Cheek has allayed fears that he would be leaving the club in the summer, saying “there’s no reason [to] think about leaving Chelsea,” the Sun reports.

On top of that, the 23-year-old cheekily added: “If I get a pay-rise, that would be great!”

The news comes at a time when Chelsea fans have had little to cheer about with regard to transfers, after FIFA rejected their appeal against a one-year transfer ban, which was imposed on them for suspicion of breaking regulations when signing youth players.

With the Blues now unable to sign anyone for the next two transfer windows, Loftus-Cheek revealing that he has no plans to leave the club should come as some small consolation.

– Anthony Martial won’t fall victim to Manchester United’s aforementioned summer clear-out, the Mirror reports. It’s expected that Solskjaer will keep the faith in the France international, despite the fact he has only managed 12 goals in 37 games this season.

– Celtic dynamo Tom Rogic could be set for a reunion with Brendan Rodgers at Leicester City, according to the Sydney Morning Herald. The paper says that both the Foxes and Southampton are keen to lure the Australia international away from Parkhead.