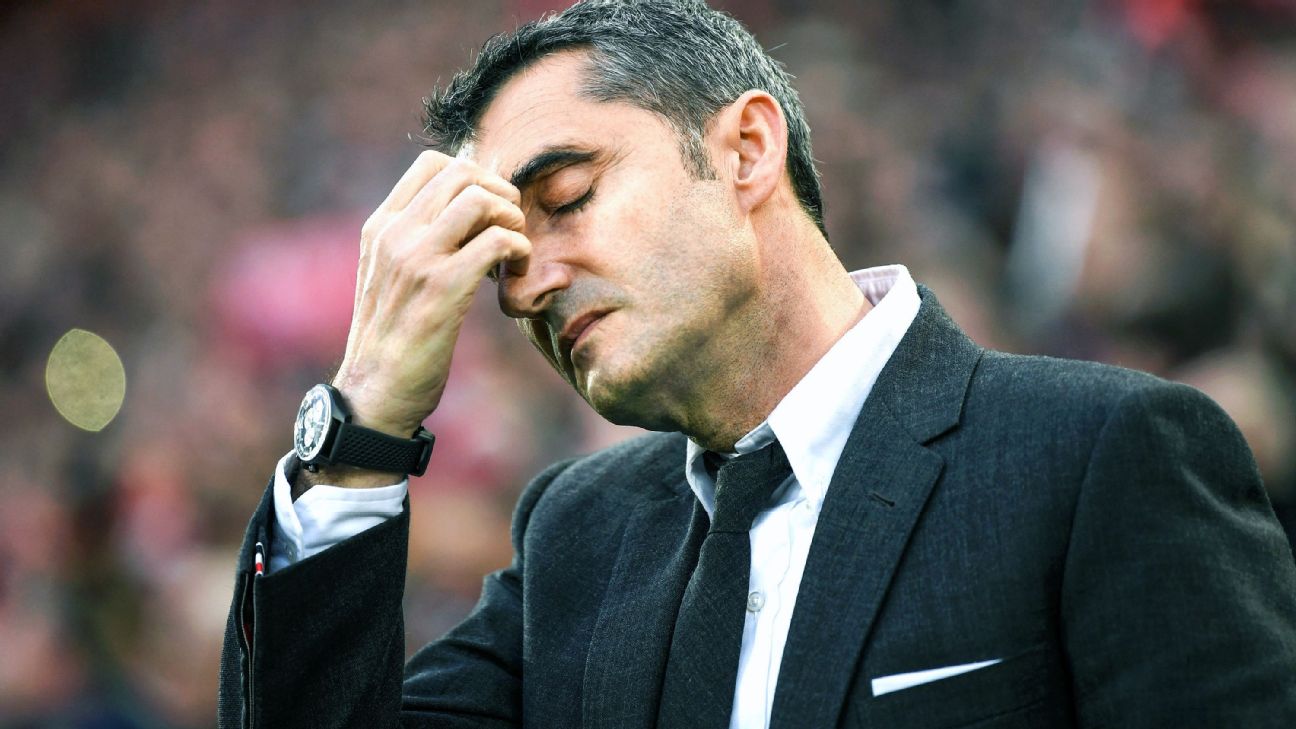 Maybe as a kid you didn’t see the point in history class, reading up on all those men (and yeah, they were probably mostly men) of yesteryear, with their outdated ideas and senseless battles won and lost. Maybe you failed to see how events from centuries ago have any relevance to the here and now. And maybe that’s why some annoyed teacher or parent quoted the philosopher George Santayana to you: “Those who cannot remember the past are condemned to repeat it.”

Ernesto Valverde was likely never told this. Or, if he was, he wasn’t paying attention.

There are few other explanations for what unfolded at Anfield on Tuesday night.

Let’s be very clear. This column focuses on Barcelona’s deficiencies. It should in no way detract from the Herculean effort put out by Jurgen Klopp and Liverpool, from the way foot-soldiers like Divock Origi and Georginio Wijnaldum turned into game-changers and from the way an assembled sea of red and Scouse helped turn an implausible notion into real, live history through the sheer din of wanting it to happen.

It was a night that will live on in Anfield lore. It was extraordinary. But so, too, was what happened to Barcelona, and not in a good way.

Rewind 13 months, because this was a mashup of “Groundhog Day” and “Nightmare on Valverde Street.” Ernesto Valverde’s Barca roll to victory by a three-goal margin at the Camp Nou against Roma. The score should have been closer than it was — Allison was in goal for the opposition — and then, in the return leg, it all falls apart. Just like at Anfield.

Barcelona slumbered through the first few minutes and conceded a goal after misjudging a speculative ball down their left flank. At the Stadio Olimpico, it was Edin Dzeko after six minutes; at Anfield, Origi after seven. Galvanized by the early strike and spurred on by the crowd, Roma held an absurdly high defensive line and pressed the stuffing out of Barca’s midfield, often engaging them in the opposing half. Pretty much like Liverpool on Tuesday night.

They didn’t score again until the second half but the marker was laid down: we will give everything and gamble by pressing in your half and daring you to hit balls over the top for Lionel Messi and Luis Suarez. It was a gamble — of course it was — and it put a strain on the central defenders. But Barcelona couldn’t exploit it, whether because their strikers are now in their 30s and asking them to sprint 30 yards time and again isn’t a great idea, or whether because the opposing defenders were that good on the night.

So what did he do?

Not much. In Rome, he waited actually until nine minutes from time to make his first change, Andre Gomes for an exhausted Andres Iniesta. At Anfield, he struck at the hour mark, taking off Philippe Coutinho for a full-back, Nelson Semedo, and moving Sergi Roberto into midfield. In Rome, a third goal conceded would have knocked out Barcelona on away goals so you can sort of see the logic: let’s take off an attacking midfielder for a defensive one. In Liverpool, because the first leg had finished 3-0, there wasn’t much to defend. Barcelona had to score or face the prospect of extra-time.

Roma’s winner came eight minutes from time, when Kostas Manolas caught Nelson Semedo napping at the near post. Liverpool’s was 11 minutes from time, the difference being that at Anfield, it was the entire Barca defence that switched off and were punished by the trickery of Trent Alexander-Arnold and the coolness of Origi.

Then, as now, a 60-something Bostonian billionaire owner laughed and rejoiced like he hadn’t done since he made his first million. Maybe more so.

It didn’t take Nostradamus to predict how Klopp would approach the game: early gamble, high press and intensity, hope for a quick goal to get the crowd into it. Heck, he had the whole Roma blueprint from the year before. Maybe Valverde thought (wrongly) that Liverpool would do things differently, fine. But once he saw things unfold just as they had a little over a year ago, why not look for alternatives? Why not actually read the game and try something different?

He might point out that, relative to the Roma game, Barca did create better chances and did force better saves from Alisson. But they also kept getting overrun in the middle of the park. For Andres Iniesta — a non-factor in Rome — read Coutinho at Anfield, bar from a single shot that was saved by Alisson. Arturo Vidal‘s wild man schtick fooled nobody, Ivan Rakitic was spending so much time helping Sergio Busquets (hampered by a first-half booking and the fact that he isn’t the one-man gang he once was) that he was gassed when he got on the ball. And the less said about Jordi Alba‘s night, the better.

A coach is on the sideline, all blame must be shared with the players. We get it. It’s a footballing mantra. Nobody is exonerating the players: nine of them were in Rome too, you’d imagine they might have remembered what happened. But it’s the coach’s job to read and understand his players, to put the right ones out in conditions where they can best contribute even when they’re having a bad day. And if circumstances change, find a more suitable approach. Or change the players.

Valverde chose the wrong game plan, seemingly oblivious to what Liverpool would do,  and when it wasn’t working, he was slow to act. When he finally did act, he made the wrong choices. Sharing the blame with the players doesn’t mean he gets a free pass, on the contrary.

Frankly, neither does the club. When you have the second-highest wage bill in the universe and your reserve centerforward is Kevin Prince Boateng — who only arrived in January, on loan from a mid-table Serie A side, is not a centerforward and is Kevin-Prince Boateng – something is seriously wrong. It means either you believe Messi and Suarez — who are 31 and 32, respectively — are invulnerable to injury or suspension (and we know with the latter, that’s not the case), which is foolish, or you believe that the rest of the team is so gifted that it doesn’t matter, which is deluded.

Maybe Valverde thought Ousmane Dembele would be around to provide fresh legs off the bench, even though in Rome he only sent him on in the final five minutes: wrong. Maybe he thought that against Grandpa James Milner, any old Malcom would do: wrong again. Maybe he thought Messi would load the whole kit and caboodle on his back, like he did in the first leg and at so many points in the season: wrong. (Messi spawns more miracles than anyone, but even his supply isn’t limitless.)

(Oh, and while we’re at it: Suarez has not scored away from home in the Champions League since September 2015. That’s 18 games and counting. To not have an alternative, or at least some help, other than the ubiquitous Messi, the ghost of Coutinho and Dembele, who has lasted 90 minutes just four times this season, plus of course Boateng and Malcom, boggles the mind.)

Valverde may well go on to win the Double this season, just as he did last year. And just like last year, it will feel that little bit empty. Not because they were knocked out of the Champions League, per se, but because they went out in eerily similar circumstances, their reaction barely shifting as they lived out the copycat sequel to their own personal horror show.

It’s one thing for a manager and his players to make mistakes; it’s quite another to not learn from them and, in near-identical circumstances, take the exact same wrong course of action they took before, hoping for a different result.

CT U21 NICOLATO IN VISITA AL MAPEI
Alves: Loss a ‘warning signal’ for injury-hit Brazil
Pele responding well to treatment for respiratory infection – hospital
Japan stun Spain 2-1 as both reach WC last 16
USA’s win over Iran a relief for Berhalter after a tense build-up that had turned bizarre