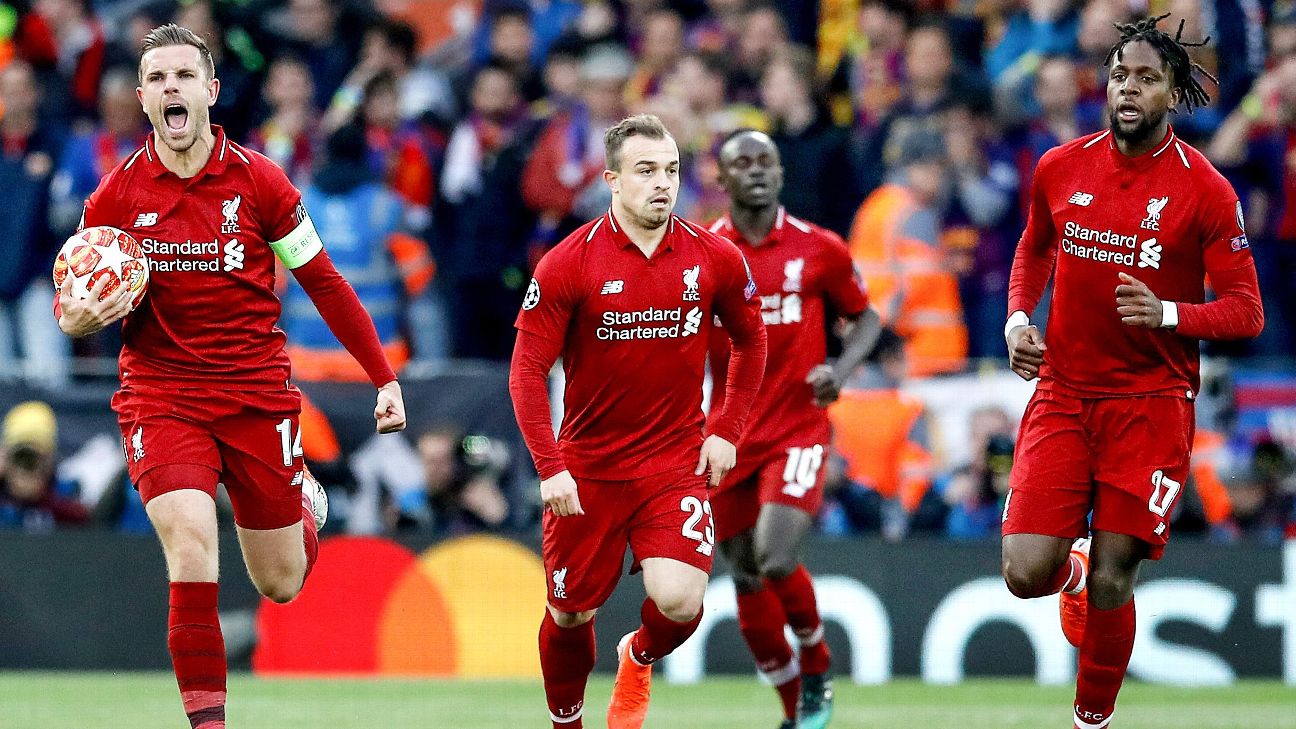 There have been many momentous Anfield nights in Liverpool’s European history but this one tops them all. Nobody gave the Reds a chance of overturning a 3-0 first-leg deficit to the mighty Barcelona, but somehow they did it after a pulsating performance saw two goals apiece from Divock Origi and Georginio Wijnaldum send the Reds to a second successive Champions League final with a 4-0 victory.

Where to start? This was heroic stuff from all concerned. Players, crowd, manager. Liverpool pulled off the impossible, and from looking like a wonderful season would end up trophyless, now there is once again hope of bringing one back to Anfield.

10 – His selection options were limited due to injuries, but the players he brought in did themselves and the club proud. Not least Origi, who was given the nod at centre-forward and produced two goals, while Wijnaldum came off the bench to score twice himself. Klopp managed to convince his players they could achieve the impossible, and they did.

GK Alisson, 10 — Liverpool defended brilliantly but with Lionel Messi around it’s impossible to shut them down completely. Any time Barca got a sniff of a chance, the big Brazilian was up to the task with a save to deny Jordi Alba the highlight of a commanding performance.

DF Trent Alexander-Arnold, 10 — Wow. The youngster was just sensational. Defensively he was magnificent, while his passing was almost Steven Gerrard-like and his crossing rivals anything in Europe. Made the third goal with a wicked, low delivery and showed quick thinking to create the decisive fourth goal with a clever corner that caught every Barcelona player napping. Not something you’d normally see from a 20-year-old, but this is no normal 20-year-old.

DF Joel Matip, 10 — Barring one momentary lapse when he tried to play Luis Suarez offside, the big man was flawless again. In truth, Suarez barely had a sniff all night. Booked late on for bringing down Messi but even that was a good decision.

DF Virgil van Dijk, 10 — Majestic. Absolutely imperious. He won every ball that was played in his direction, cut out countless attempted through balls and pull backs, and he was a threat in the opposition box, almost scoring with an improvised back-heel flick.

DF Andrew Robertson, 9 — Yet another brilliant display from the Scot, albeit he only managed to last one half. His ongoing war with Suarez from the first leg continued and it was a kick from the Uruguayan that ended Robertson’s evening prematurely. As he said afterwards though, he’s going to the final and Suarez isn’t and that’s all that matters.

MF Fabinho, 10 — On a night when Liverpool had countless heroes, Fabinho might just have been the pick of the bunch. What he did was astonishing, particularly given that he was harshly booked after 10 minutes for a brilliant tackle on Suarez. He set the tone early with his tackling and aggression, and he didn’t let up. Even in the closing minutes he was there harrying Messi out of possession. Very few players could have kept Messi this quiet, but Fabinho’s display was monstrous.

MF Jordan Henderson, 10 — Brilliant. Created the opener with a surging run into the box and kept running forward all night. Not even a nasty kick to the knee could slow him down. A true captain’s display and he was almost in tears at the final whistle.

MF James Milner, 10 — Another hero. Brilliant in midfield in the first half, and even better at left-back when he replaced Robertson for the second. Showed all of his experience late on in keeping the ball in the corner and allowing time to run out.

FW Xherdan Shaqiri, 8 — The one player who wasn’t completely on it, especially in the first half when his sloppiness in possession put his side under pressure on more than one occasion. He sharpened up after the break, produced some good deliveries and worked his socks off helping Alexander-Arnold contain the threat of Alba.

FW Divock Origi, 10 — What an incredible few days it’s been for the Belgian. He was the saviour at St James’ Park, but this was something else entirely. Two good striker’s goals, tireless running and a great desire to fight for every ball. An unlikely hero perhaps, but a hero nonetheless.

FW Sadio Mane, 10 — He didn’t score but he was too hot for Barca to handle all night. Perhaps should have had a penalty, but just as in the first leg the officials were not convinced. While others claim the headlines after this, Mane’s role can’t be overstated because he ran Barcelona’s defence ragged.

MF Georginio Wijnaldum, 10 — What an impact! Came off the bench to replace Robertson and within no time he’d scored twice. The first was a good finish on the run, the second was a towering header into the top corner. It wasn’t just the goals though, his calmness under pressure and footwork to get out of tricky spots also caught the eye, while like everyone else he pressed as though his life depended on it.

FW Daniel Sturridge, N/R — Brought on for the closing moments in place of Shaqiri.