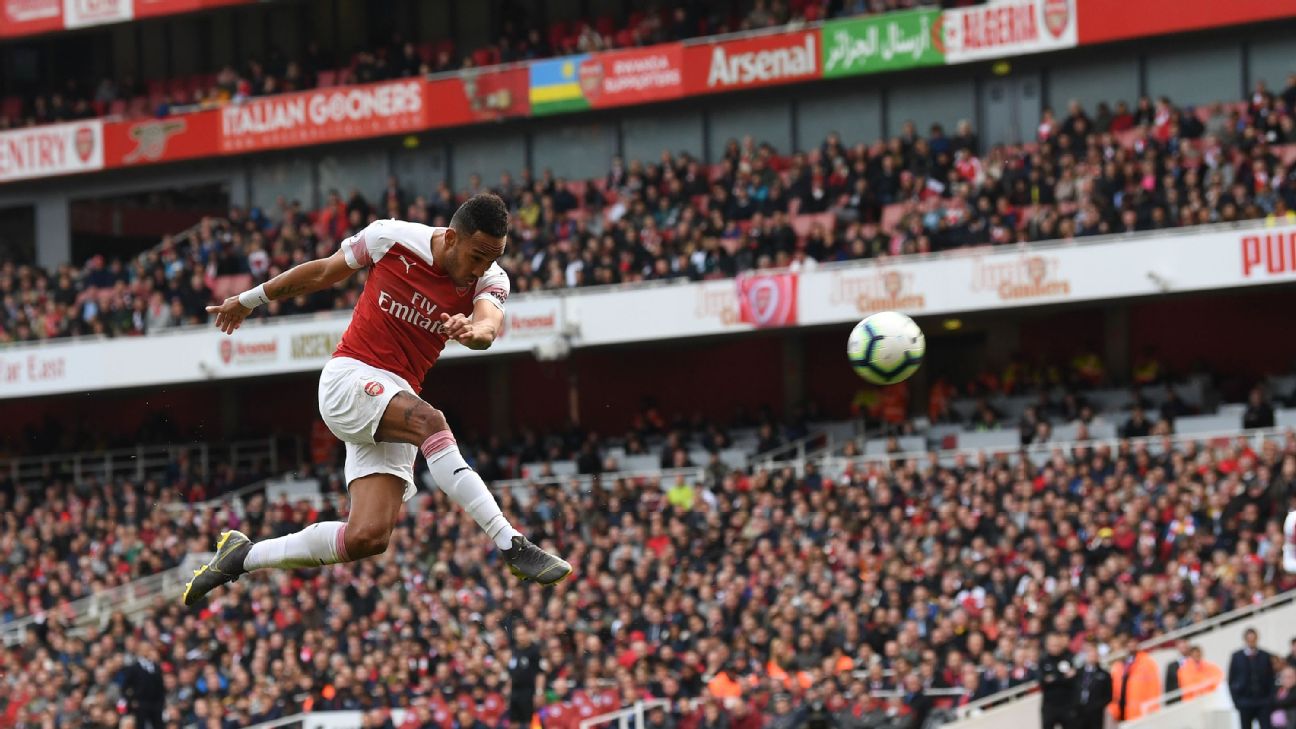 Arsenal’s Pierre-Emerick Aubameyang joined Mohamed Salah and Sadio Mane in hitting the 20-goal mark in the Premier League this season after scoring against Brighton & Hove Albion on Sunday, but all three appear set to end the campaign disappointed.

Auba’s opener against Brighton took him to 20 goals in 35 Premier League outings so far this term, meaning that this season represents the first time that three African players have passed 20 goals in the same campaign.

The Gabon international converted a penalty after nine minutes, but the Gunners were unable to hold on, with Glenn Murray netting a 61st-minute spot kick to salvage a point for the Seagulls.

The draw meant that the Gunners missed the opportunity to claw three points back on Tottenham Hotspur, who lost their third league game in four after being defeated 1-0 at Bournemouth having been reduced to nine men.

Unai Emery’s side now need to beat Burnley away on the final day, hope Spurs lose against Everton at home, and overturn an eight-goal deficit if they’re to overhaul their North London rivals and secure Champions League qualification via the top flight.

Liverpool, without the injured Naby Keita, maintained their title challenge with a 3-2 victory at Newcastle United on Saturday, with Christian Atsu scoring his first goal of the campaign for the hosts.

Salah, who has 22 goals after 37 appearances, was replaced after 73 minutes following a collision with Magpies goalkeeper Martin Dubravka, and was subsequently ruled out of the Merseysiders’ Champions League semi-final second leg against Barcelona on Tuesday with concussion.

Mane, who struck his 20th goal of the league season in the Reds’ recent 5-0 rout of Huddersfield Town, was ineffectual for Jurgen Klopp’s side as they, temporarily, regained top spot on 94 points.

Their joy was short-lived, however, as Manchester City’s 1-0 victory against Leicester City on Monday means they will retain their title if they defeat Brighton away on Sunday, regardless of Liverpool’s result at home against Wolves.

At the other end of the table, Cardiff City’s increasingly futile battle against relegation was ended as they were beaten 3-2 at home by Crystal Palace. Wilfried Zaha opened the scoring for the visitors as he continued his magnificent form away from Selhurst Park this term.

The Ivorian’s strike was his 10th of the season, and his ninth away from South London. Only Harry Kane and Jamie Vardy have more league goals away from home this term, while no player to have scored at least 10 goals in single Premier League campaign has managed a greater percentage on the road than Zaha’s 90 percent.

Another Ivorian made headlines in the Bundesliga, as Salomon Kalou struck for Hertha Berlin as they defeated VfB Stuttgart 3-1 on Saturday. The veteran’s contribution helped Hertha end their seven-game winless streak, while simultaneously plunging Stuttgart deeper into the relegation mire.

Marcel Tisserand – who will be Africa Cup of Nations-bound with the Democratic Republic of Congo – scored his first Bundesliga goal for Wolfsburg as they defeated Ishak Belfodil’s Hoffenheim to boost their prospects of Europa League qualification.

The centre-back’s season has been beset by niggling injuries, but Leopards coach Florent Ibenge will be hoping that he’s returning in time to play a big part for the Central Africans at Afcon.

With three games to go in Serie A, Torino also remained in the running for Europe after extending their undefeated streak to seven matches with a 1-1 Friday-night draw in the Turin Derby against Juventus.

Cameroon centre-back Nicolas N’Koulou was again impressive for the visitors, making seven clearances, two decisive interceptions, and registering 83.9 percent pass-success rate as he again proved himself to be a big-game player.

N’Koulou’s fine showing came on the back of his imperious outing in last month’s victory over AC Milan, and will surely prompt longing glances from Indomitable Lions coach Clarence Seedorf, who’s openly acknowledged that he’d love for the centre-back to end his self-imposed international exile.

In Spain, Youssef En-Nesyri‘s fine 2019 continued with a delicious opener for Leganes in their unexpected 3-0 victory over Sevilla. The Moroccan enjoyed red-hot form earlier in the campaign, but his fine curling effort on Friday ended his eight-game wait for a goal.

His ninth goal of the season proved critical in sending Leganes on their way to their first victory in a month.

In Getafe, Togo’s Djene Dakonam continued his magnificent recent form with a composed and resolute display in the heart of the hosts’ defence as they saw off Girona 2-0 to take another step towards the Champions League.

Azulones, who have never before qualified for Europe’s premier club competition, are in fourth, three points clear of Valencia and Sevilla with two matches to play.

Coulibaly has now had a decisive hand in six goals in his last six Ligue 1 outings, having only scored three and contributed one assist in his first 31 outings in the division since moving from Gent in 2017.

The Canaries’ Brittany rivals Stade Rennais also relied on African stars to get points on the board this weekend, as they held Toulouse 2-2 away.

M’Baye Niang opened the scoring for the visitors, and Ismaila Sarr scored a 58th-minute equaliser from the penalty spot after Jummy Durmaz and Togo winger Mathieu Dossevi thought they’d turned the tide in Toulouse’s favour.

World Cup quarterfinals preview: What to know about each team, predictions, schedule and more
England beat Senegal to set up clash with France
Why Brazil vs. Croatia is also a battle of iconic kits and deeper meaning
PSG president: Confident ‘happy’ Messi will stay
Eto’o filmed in altercation outside WC stadium