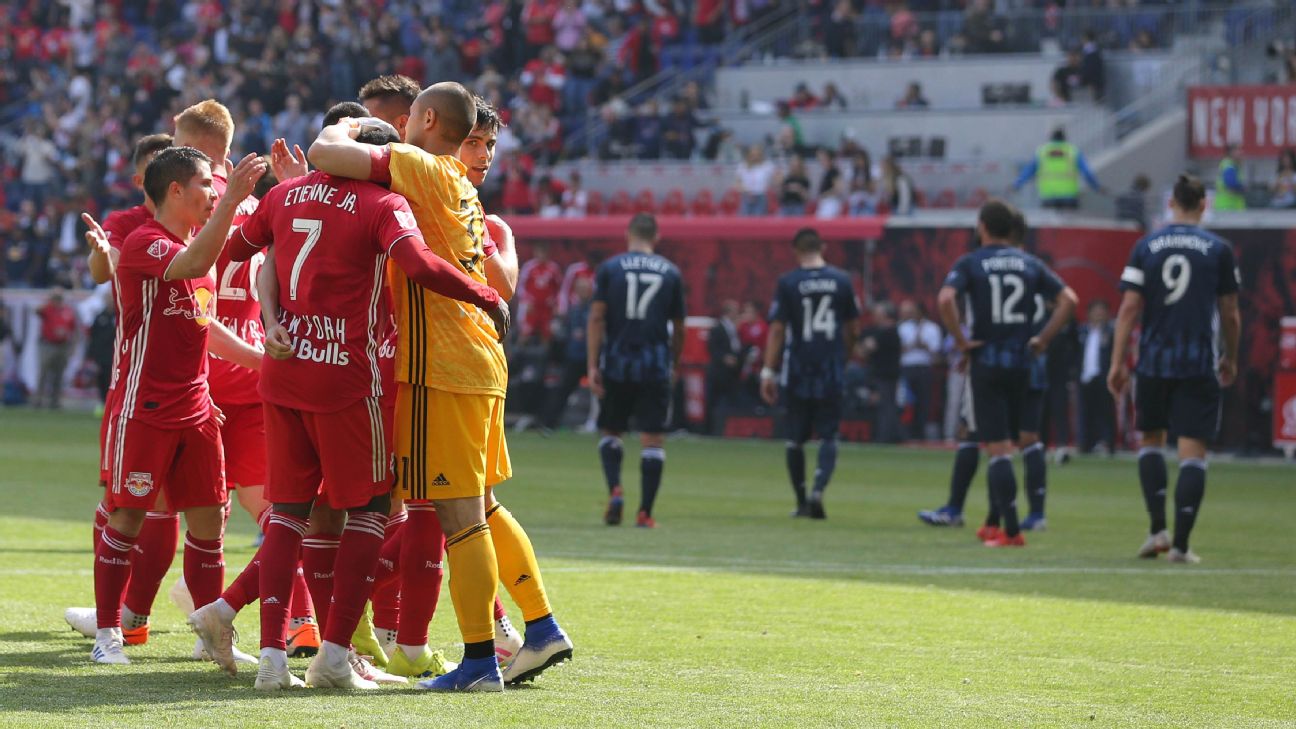 The two best teams in Major League Soccer in 2018 were Atlanta United and the New York Red Bulls. The former won MLS Cup at home in front of 70,000 fans. The latter collected the Supporters Shield, setting a points record in the process. Then there were the Portland Timbers, who successfully navigated the Western Conference playoffs and reached the MLS Cup Final.

And so this week shall be dubbed “Revivalry Week.” The Red Bulls engineered a statement win against LA, Atlanta bossed Sporting, and Portland rattled off a third straight win on the road.

Bob Bradley’s team was shoutout for just the second time this season in what can only be called a “weird” goalless draw against on Chicago on Saturday. The Fire defended well but LAFC’s failure to win at home for the first time in 2019 was more down to poor finishing than anything else.

A questionable penalty call and a well-worked Mauro Manotas goal off a counter-attack led the Dynamo to a victory in the first Texas Derby match of the year. El Capitan might still be in Frisco but thanks to Alberth Elis and Mauro Manotas, the men in orange have one hand on the cannon.

The much-improved Galaxy defense glitched a bit in New Jersey, where the Red Bulls put three past David Bingham. It seems a little odd that the Galaxy worked so hard to pull off the transfer of Giancarlo Gonzalez a month ago, only for the Costa Rica international to be rooted to the bench.

The post was Seattle’s enemy on Saturday in Minnesota. Whether it was bad luck or a lack of accuracy, the Sounders left St. Paul with one point instead of three after hitting the woodwork twice in the second half. It’s hardly a reason for panic but Seattle’s run of three straight draws has dropped them down to fourth place in the West.

What a week for Jim Curtin’s team. With six points in hand, the Union are now top of the Eastern Conference on a tiebreaker. While it’s worth keeping in mind that while the Union played two very bad teams this week and the East is weaker than expected, sitting in first place 11 games into the season is a big feat for a club used to being in the basement.

After weeks of finding it difficult to score, the Black and Red dropped three on Columbus in a home win Saturday. “Dropped” might be a bit kind though since one was a penalty, one came from a chaotic set piece and one took a kind deflection. A win is a win, however, especially when it’s the first home victory since mid-March.

Tip of the cap to Jonathan Osorio, who, clearly tired of Toronto FC failing to create chances as a team, took it upon himself to embarrass multiple Orlando City defenders on his way to scoring the Reds opener on Saturday. Toronto won’t be comfortable without Jozy Altidore in the lineup but Osorio is capable of picking up the slack.

Luchi Gonzalez’s team was missing Paxton Pomykal in Houston and it showed. Without the young midfielder’s passing abilities in the middle, FC Dallas struggled to create scoring opportunities. When they did put the ball in the net, VAR took it off the board. Santiago Mosquera sure didn’t look offside (clear and obvious?) from here.

The Loons are still undefeated at Allianz Field but draws can’t be satisfying when Minnesota needs those home performances to deliver three points. A rate of one rendition of Wonderwall every four games is not the kind of record that will push United into the playoffs for the first time.

Picking up points in six straight games is good, no matter the type of result. Give NYCFC and Dome Torrent some credit for the streak, even if collecting so many draws means that the club sits in fifth place in the East instead of higher up the table. Next week’s home date against the Galaxy is a massive game for the Pigeons.

The Impact played better than the look at the surface at Stade Saputo, but that’s not saying much. Remi Garde’s team has weathered the Ignacio Piatti-less period fairly well but cleary miss the Argentine attacker. With no clear timetable on his return, it might be time to worry.

Another week that will surely have coach Caleb Porter shaking his head. Losing 3-1 to D.C., and getting just two shots on target, isn’t the kind of thing you expect from a team that should be a shoe-in for a playoff spot.

The Lions were blanked for the first time this season at home against Toronto, a dispiriting effort for a club still stuck just on the wrong side of “good.” There’s no such thing as a head of steam for a team like Orlando, where the talent level makes the margins between a good result and a bad one very small.

Nothing is ever simple, so let’s not get ahead of ourselves with the idea that the Red Bulls are suddenly good again. Narratives are nice, but not necessarily real. Still, Chris Armas’ team has a winning streak now and there’s no reason a win over LA (without Bradley Wright-Phillips or Kaku) won’t be a massive confidence boost.

The game was there for RSL, but Albert Rusnak‘s saved penalty gave the Timbers a chance to grab the lead first. When that happened, the home side couldn’t find a way back. Real Salt Lake is now 2-0-2 at home, a distressing record for a team that won’t have much cushion when it comes to getting into the postseason.

United’s best showing to date in 2019 sets up a fascinating match on Wednesday at Mercedes-Benz Stadium against Toronto FC. Save for Sporting’s injury problems, the biggest reason for Atlanta’s back-to-best showing on Sunday night was the play of Ezequiel Barco. Too bad the Argentine will be away at the U-20 World Cup starting on Monday.

Three straight wins on the road for the Timbers, a team that is still three weeks away from their home opener at the expanded Providence Park. The club also executed a transfer move at the deadline, snagging Necaxa striker Brian Fernandez to add more scoring punch.

The Fire picked up what might be the most impressive road point of any MLS team in 2019 with a draw at Banc of California Stadium. Sure, they did it by sitting deep and fouling the best team in the league repeatedly –not to mention with plenty of luck and emergency defending — but nobody makes the playoffs on style alone.

The “Almeyda-lution” (working title) continued with a 1-0 win over FC Cincinnati, though the win was much more difficult than San Jose manager Matias Almeyda would have liked. Holding onto a one goal lead over the course of 40 minutes while playing down a man is impressive for a team early on in the transition to the man-marking system.

Sporting is a depleted team and it showed against Atlanta. Things were so bad in Kansas City this week that Peter Vermes had to cancel training due to a lack of players. They were able to get their game in against Atlanta on Sunday, but maybe it would have been better just to cancel the thing.

The ‘Caps did just enough to capitalize on the Rapids’ rough week with a win on the road in Commerce City, though letting Colorado back in the game at all doesn’t speak well to Vancouver’s discipline. Marc Dos Santos’ team will need a few more wins against better teams to get credit for real improvement.

If it’s possible for the wheels to come off in an expansion season, then the wheels have come off for FC Cincinnati. FCC is on a five-game losing streak and hasn’t won in seven games. Following a midweek loss in Philly, Alan Koch lamented the quality of his roster. That’s an “uh oh” moment.

No new manager bump for the Rapids. It was pretty much the same for Colorado in the first game after Anthony Hudson’s departure: Chaotic, undisciplined, entertaining, but ultimately disappointing. The undisciplined part came from Diego Rubio, who will get a timeout after failing to keep his hands to himself.