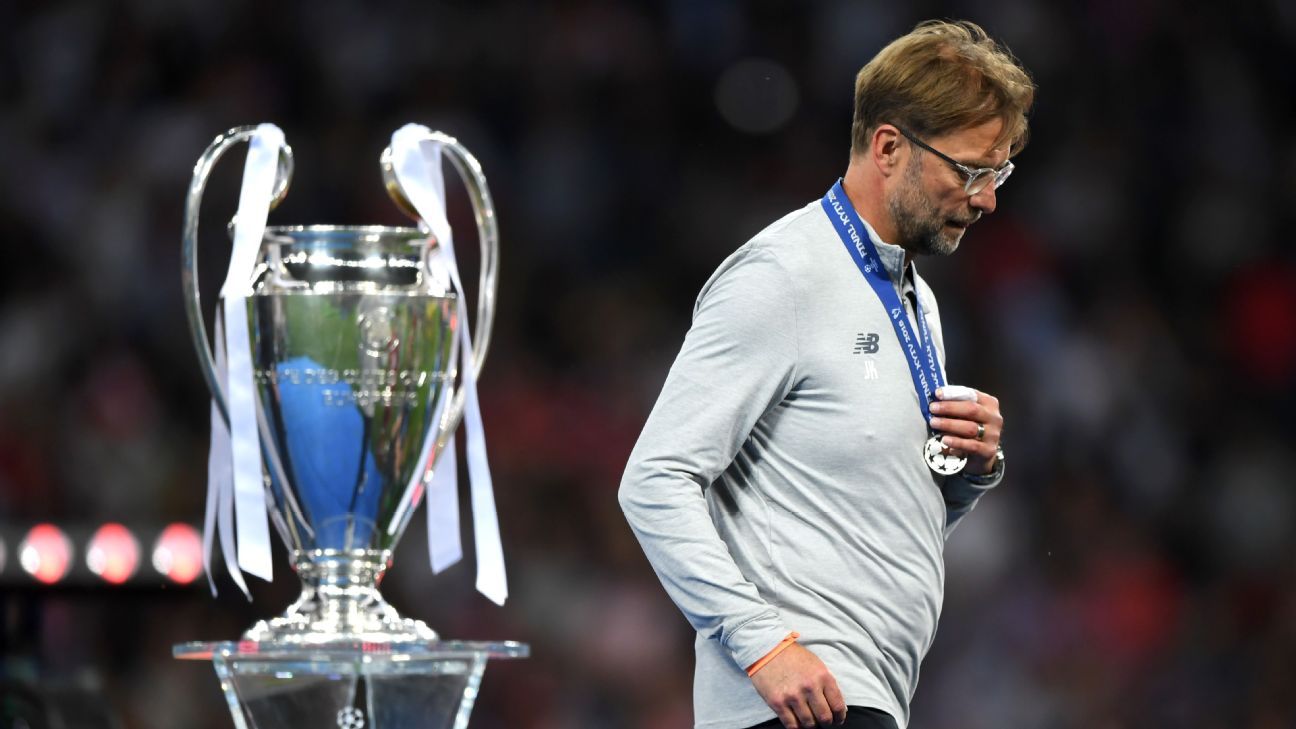 LIVERPOOL — They are beginning to grow accustomed to “beautiful failure” at Liverpool, but manager Jurgen Klopp knows that the only way to experience the other side of the coin is by risking everything to get it.

Over the past five years, Liverpool’s exciting brand of attacking football has seen them finish as runners-up in the Premier League, Champions League, Europa League and EFL Cup, and they may be on course to fall short of silverware again this season.

– Wright Thompson: What a title would mean to Liverpool
– Cox: What we learned from the UCL semifinals

This could be the start of the biggest week in Liverpool’s history for three decades, but it could also, once again, end in beautiful failure.

If Liverpool overturn a 3-0 first-leg deficit in their Champions League semifinal against Barcelona at Anfield on Tuesday to seal a place in next month’s final in Madrid, and then go on to win the Premier League title on the final day of season on Sunday, it will be up there with anything achieved before in the club’s stellar history.

Yet the odds are stacked against Liverpool in the first part of that challenge and need help from others (Leicester or Brighton) to pull off the second.

Trailing 3-0 against Barcelona, they must somehow climb the mountain on Tuesday without the injured Mohamed Salah and Roberto Firmino. Liverpool also know that if Barca score one, they will have to score five to make it to Madrid. But while Klopp is a realist, he is not giving up completely.

“The approach? We try to win the game,” he told a news conference. “That makes sense, but the situation is not what you want to have. There is hope and it is football, but two of the world’s best strikers are not available and we have to score four goals to go through in 90 minutes.

“Yet as long as we have 11 players on the pitch, we will try for 90 minutes to celebrate the Champions League campaign to give it a proper finish. That’s the plan. If we can do it, wonderful. If we can’t do it, let’s fail in the most beautiful way.”

Liverpool can only play one way on Tuesday and that is to attack Barcelona and hope for another miraculous European fightback — one that would be on a par with the “Miracle of Istanbul” in terms of magnitude.

Back in 2005, trailing 3-0 at half-time against a great AC Milan side in the Champions League final in Istanbul, Rafael Benitez’s Liverpool fought back to 3-3 before winning the club’s fifth European Cup on penalties. Milan were a team packed with European experience and iconic names; Barcelona are no different, so Liverpool will take inspiration from that night in Turkey.

And then there is the Anfield factor. Supporters of rival teams often roll their eyes when the subject of the “special” European atmosphere at Anfield is raised, but over the years it has made a difference.

Manchester City were blown away by the intensity of Anfield when losing last season’s quarterfinal first-leg 3-0, while the likes of St Etienne, Auxerre, Chelsea and Borussia Dortmund have discovered over the years that Liverpool’s players can be driven onto incredible feats by their home surroundings when the odds are seemingly against them.

Even Lionel Messi, after his outstanding two-goal performance in Camp Nou last week, admitted that Barcelona must deal with the Anfield atmosphere, as well as Klopp’s players, if they are to finish the job on Tuesday. “The tie is not decided because we are going to a historical stadium and it will demand a lot,” he said after the first-leg.

But the absence of Salah and Firmino is a huge blow for Klopp, who was already required to take even more risks than usual with his team on Tuesday. Dutch midfielder Georginio Wijnaldum was deployed in the front three in Barcelona, but chasing a three-goal deficit, it is likely to be two from Divock Origi, Daniel Sturridge or Xherdan Shaqiri alongside Sadio Mane at Anfield.

And having chosen the more defensively-minded Joe Gomez at right-back in Barcelona, Klopp is expected to select the more adventurous Trent Alexander-Arnold for this game.

Alexander-Arnold‘s ability to create goal scoring chances with his delivery from the right has been crucial for Liverpool this season, but his defensive shortcomings have been exposed by Cardiff’s Nathaniel Mendez-Laing and Newcastle’s Matt Ritchie in recent weeks, so Barcelona will have pinpointed the England international as a potential weak link to exploit. Liverpool must play with the handbrake off — though they rarely play with it on — and that will leave them exposed to the devastating ability of Barcelona’s forwards.

However, Barca took their eye off the ball against AS Roma last season and were knocked out in the quarterfinals after surrendering a 4-1 first-leg advantage by losing 3-0 in Rome. They may have their own psychological demons to overcome and Klopp admits that what happened in the Stadio Olimpico can inspire Liverpool.

“It gives us that hope,” Klopp said. “But I don’t want to sit here and give any reason to the Barcelona players to be any more motivated though.

“We cannot compare ourselves to Roma or anyone else, but we don’t have to. We just have to be really good defending and really creative offensively. And then we will see what the outcome is. A performance would be cool.”

Whichever way it goes, the only certainty is that Liverpool will not go down without a fight.