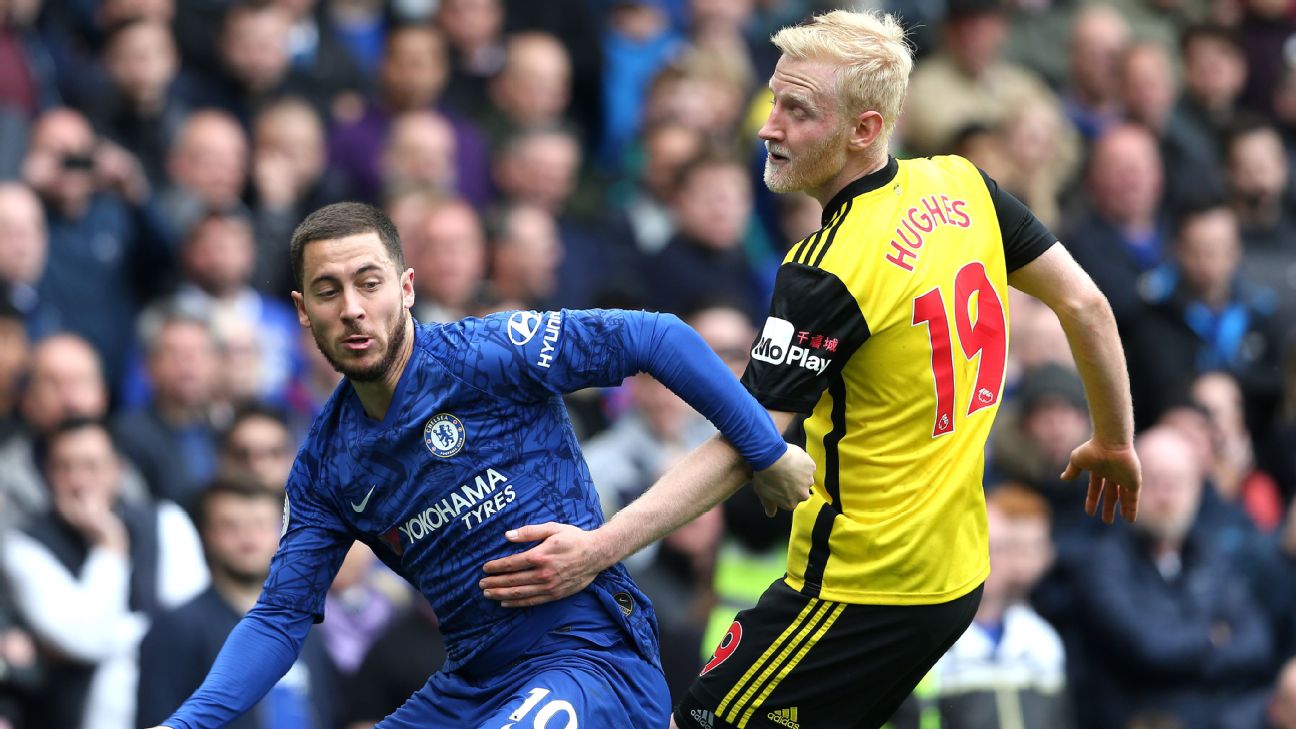 LONDON — Second-half goals from Ruben Loftus-Cheek, David Luiz and Gonzalo Higuain helped Chelsea beat a dangerous Watford side 3-0 at Stamford Bridge to put Maurizio Sarri on the brink of delivering a top-four finish in the Premier League.

This was a must-win for Chelsea and they delivered even if the surge took 45 minutes to arrive. Loftus-Cheek made a huge difference when he came on and Higuain even managed to get himself a confidence-boosting goal. Gary Cahill also got a chance to say goodbye to an adoring Stamford Bridge.

N’Golo Kante‘s early withdrawal through injury was worrying and will be a massive problem for Sarri if he requires significant time out. The extent to which Watford dominated early also underlined the flaws in this team, and could yet undermine their hopes of success in the final stretch of the campaign.

Manager Rating out of 10

– 7 Sarri only made four changes from the Frankfurt trip and Chelsea looked likely to pay for their lethargy in the first half. For once, though, a half-time team talk seemed to do the trick. The Italian also wisely opted not to deny Gary Cahill a Stamford Bridge farewell after the defender’s public criticism of him.

Player ratings (1-10; 10=best. Players introduced after 70 minutes get no rating)

GK Kepa Arrizabalaga, 7 — Watford’s wasteful finishing meant he was rarely called into action even as they dominated early on, though he did make one spectacular flying save to tip Troy Deeney‘s header onto the post. He wasn’t always well protected by his defence but was reliable when needed.

DF Cesar Azpilicueta, 7 — It looked at times in the first half as if he’d finally reached the point of needing a rest, but soon gained a second wind and defended his flank solidly. Also came up with some big clearances when Chelsea were pushed back, though he offered little of value in attack.

DF Andreas Christensen, 5 — His lack of aggression was a real problem at times as Deeney dominated him and the rest of the Chelsea defence in the opening 45 minutes. He also struggled to get to grips with the speed and trickery of Gerard Deulofeu, though he did settle once his team went in front.

DF David Luiz, 6 — Lost the physical battle with Deeney as Watford dominated the first half but made his aerial presence felt early in the second, escaping his marker to power in Hazard’s corner. Defensively he also found Deulofeu tough to deal with, but he just about held it together.

DF Marcos Alonso, 6 — It feels like a long time since we saw him be a consistent asset to Chelsea in attack, but he at least wasn’t a liability defensively here. Avoided the temptation to escalate a niggly physical tussle with Will Hughes and even managed to hold his own against Deulofeu on one occasion.

MF N’Golo Kante, NR — Had no time to impact the game before being forced off with what appeared to be a calf injury in the 10th minute, with Loftus-Cheek replacing him.

MF Jorginho, 7 — Gave the ball away once or twice but overall, this was a continuation of his impressive performance in Frankfurt. Used the ball well to get his team on the front foot, nearly setting up goals for Hazard and Higuain, and was also aggressive enough in the tackle to shield his defence.

MF Mateo Kovacic, 7 — The early loss of Kante tasked him with doing more to protect his defence and he largely did as required. Also played a part in Chelsea’s most fluid one-touch football from back to front, moving it on neatly in tight spaces. His inability to shoot remains an issue, but this was a solid display.

FW Pedro Rodriguez, 7 — His defensive work rate against the potent combination of Roberto Pereyra and Jose Holebas was hugely valuable, and he still managed to trouble the visitors at the other end. Flashed one dangerous effort wide in the first half and later brought Foster into action after great work from Hazard.

FW Gonzalo Higuain, 6 — More useful than the attacking drain he proved to be at Old Trafford last weekend. He still looks a step too slow to be a consistent goal threat in the Premier League but his movement was good though. Forced one excellent save from Foster before adding Chelsea’s third with a lovely dink.

FW Eden Hazard, 8 — Crowded out in the first half on what may prove his last Premier League appearance at Stamford Bridge, he eventually found a way to make the decisive difference. His two corner deliveries gave Chelsea a lead they never relinquished. Also set up a big chance for Pedro with some sublime skill.

FW Ruben Loftus-Cheek, 8 — Brought on earlier than expected due to Kante’s injury, his driving runs through midfield were rare bright spots for Chelsea in a lethargic first half. Popped up at the back post to nod in Hazard’s floated cross just after the interval and tilt the game in his team’s favour.

FW Olivier Giroud, NR — Brought on for Higuain with 11 minutes remaining but did not enjoy his cameo, missing two absolute sitters.

DF Gary Cahill, NR — Granted an emotional farewell appearance by Sarri in the 89th minute to a standing ovation from Stamford Bridge, while Azpilicueta presented him with the captain’s armband for one last time.

Koulibaly strike sends Senegal into last 16
Saka on Mbappe comparison: ‘There’s only one’
Golden Boot Mbappe having WC of his ‘dreams’
Follow live: England face Senegal in round of 16 World Cup clash
Croatia reach quarterfinals after beating Japan on penalties