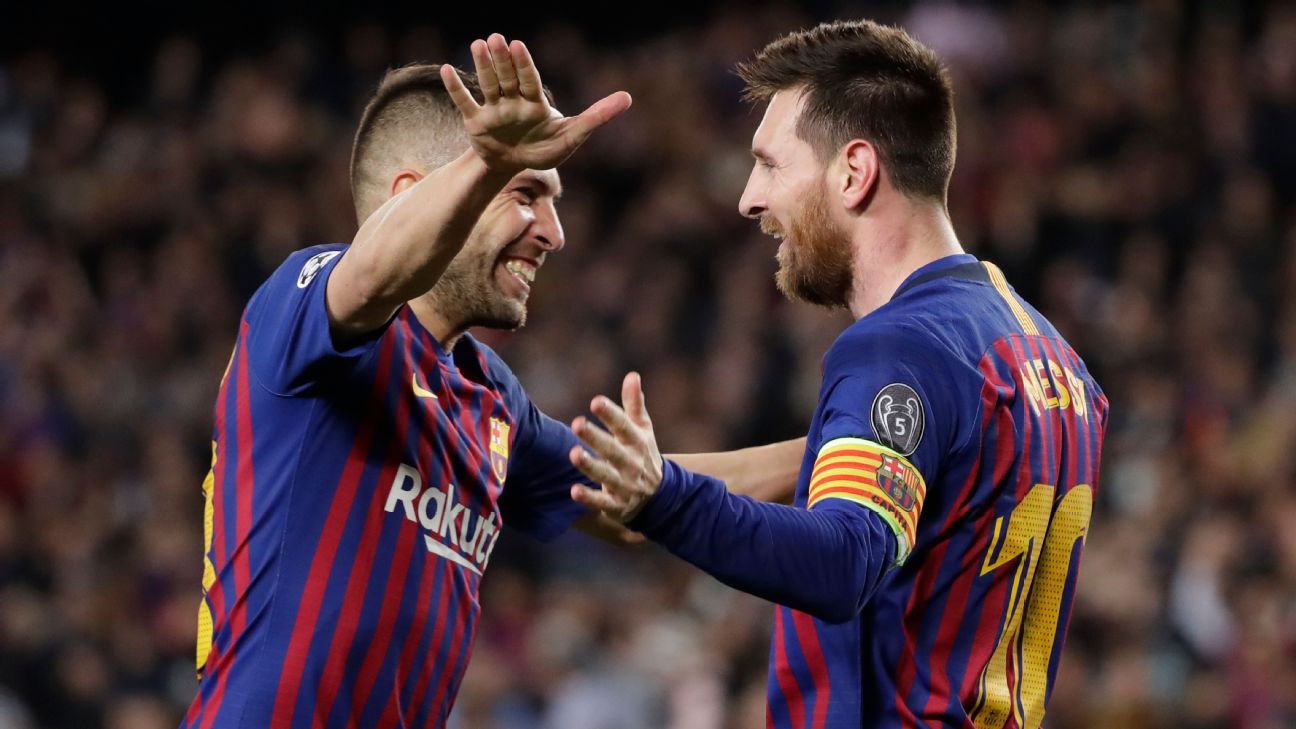 On one hand, this home win was all about Lionel Messi. But in a tactical sense, Liverpool managed to deny him space effectively: He found himself in the right position for a fortunate rebound in front of an open goal, and then curled in yet another majestic free kick.

On the other hand, the battle here was all about the left-backs. Jordi Alba has probably been Barcelona’s second-best performer this season, while Liverpool’s full-back pairing have recorded a steady stream of assists. With Trent Alexander-Arnold omitted and the more defensively solid Joe Gomez coming into the side on the right, this meant Andy Robertson would carry the attacking threat.

Ernesto Valverde’s decision to play Arturo Vidal might have been designed to stop Robertson. He was used instead of the more technical Arthur, which meant Ivan Rakitic played a left-centre midfield role, and Vidal played on the right of midfield, tasked with shutting down Robertson. He didn’t always do this particularly effectively, however, and in the first half, Liverpool’s bright moments came when Robertson overlapped aggressively. With Sadio Mane‘s speed worrying Sergi Roberto, Liverpool looked dangerous down that side.

Jurgen Klopp made no such attempts to contain Alba, aside from the concession of starting Gomez. His team selection, including a fourth midfielder because of Roberto Firmino‘s injury, hinted at using a defensive-minded right-sided player — Milner, perhaps — to track Alba. Instead, Milner played as a right-centre midfielder, and Alba was often unmarked, with Mohamed Salah staying higher up the pitch.

Alba’s trademark assist is getting to the byline and cutting the ball back for his pal Messi, and on 13 minutes, they nearly combined in typical fashion. It took a superb challenge from Robertson, covering expertly and matching Messi’s run, to stop them.

But Alba remained the key player. On 24 minutes, he nutmegged substitute Jordan Henderson, played the ball inside to Messi and sprinted in behind for the return pass — the type of run he has been making for several years, most memorably for Spain’s second goal in the 4-0 Euro 2012 final win over Italy, when he did something identical to this with Xavi before finishing smartly. This time, however, Joel Matip read the danger and intercepted. The ball ended up out wide with Salah, and Alba sprinted back across to dispossess him and concede a throw.

From the next move, Barcelona switched play to Philippe Coutinho, he laid the ball back to Alba, and the left-back produced an absolutely brilliant cross/through ball that met Luis Suarez‘s perfectly timed run for the Uruguayan to put Barcelona ahead.

Liverpool rallied at 1-0 down before Messi’s double. But the crucial tactical change was Valverde turning to Nelson Semedo, a second right-back, midway through the second half and deploying him in tandem with Sergi Roberto to shut down Liverpool’s left. From then, Robertson had less opportunity to push forward, and Liverpool were far less dangerous.

Ajax 1-0 Tottenham: The Dutch defenders come out on top

The most intriguing clash in the first Champions League semifinal was the battle between the defensive trios: It was Ajax past versus Ajax present.

Tottenham’s trio of Toby Alderweireld, Davinson Sanchez and Jan Vertonghen received their defensive tutoring in Amsterdam, while Ajax’s current triumvirate is Matthijs de Ligt, Daley Blind and Frenkie de Jong. From the outset, it was the current Ajax generation who came out on top .

Fittingly, considering the Dutch interpretation of defensive play, the superiority of the Ajax trio wasn’t really about defending. It was more about their ball-playing ability. Ajax silenced the crowd by keeping possession expertly, and a crucial factor was the ability of the centre-backs, in particular Blind, to fire line-breaking passes into the feet of midfielders and attackers. One early pass into De Jong bypassed Spurs’ press easily, while another similar ball toward Dusan Tadic cut through both sides’ entire midfields. For the first five minutes, the atmosphere at Spurs’ new ground was hugely impressive. Quickly, however, Ajax silenced the home support.

De Ligt was capable of something similar, and he emerged victorious from his physical confrontation with Fernando Llorente. It’s rare to see any young centre-back so commanding in the air, let alone a centre-back who is so technically gifted and still only 19.

But the real star was De Jong, who played as Ajax’s deepest midfielder but often dropped back into the defence to help Ajax play out from the back, turning their 4-3-3 into a 3-4-3. His calmness with the ball at his feet is remarkable, and he exudes a physical presence with his body positioning, belying his slenderness and relatively short stature.

Without the ball, De Jong was often performing two roles simultaneously. His primary responsibility was watching the runs of Dele Alli, who endured a quiet game. But De Jong was also always checking over his shoulder, assessing the positioning of Llorente and covering the passing lanes so Spurs couldn’t hit balls into the feet of the Spaniard. De Jong was helping to nullify two of Spurs’ three primary attacking threats, demonstrating tremendous tactical intelligence. It’s also notable how often De Jong finds himself in position to intercept cut-backs from the byline.

Spurs’ defenders were solid enough, though Vertonghen was forced off toward the end of the first half after he suffered a nasty blow to his head. That forced Spurs to reorganise and use a diamond midfield, which prompted an improvement, as the energy of substitute Moussa Sissoko helped them compete in the centre of the pitch and carry the ball forward toward goal more directly.

But Spurs struggled to create clear-cut chances, and even when they mounted spells of pressure in the second half, they found that Ajax’s defenders were capable of doing the ugly stuff too. Alderweireld and Vertonghen had a great partnership together in Amsterdam and have reprised it in the colours of both Belgium and Spurs. Nevertheless, with De Ligt and Blind plus De Jong dropping back between them, this is a superior central defensive base.