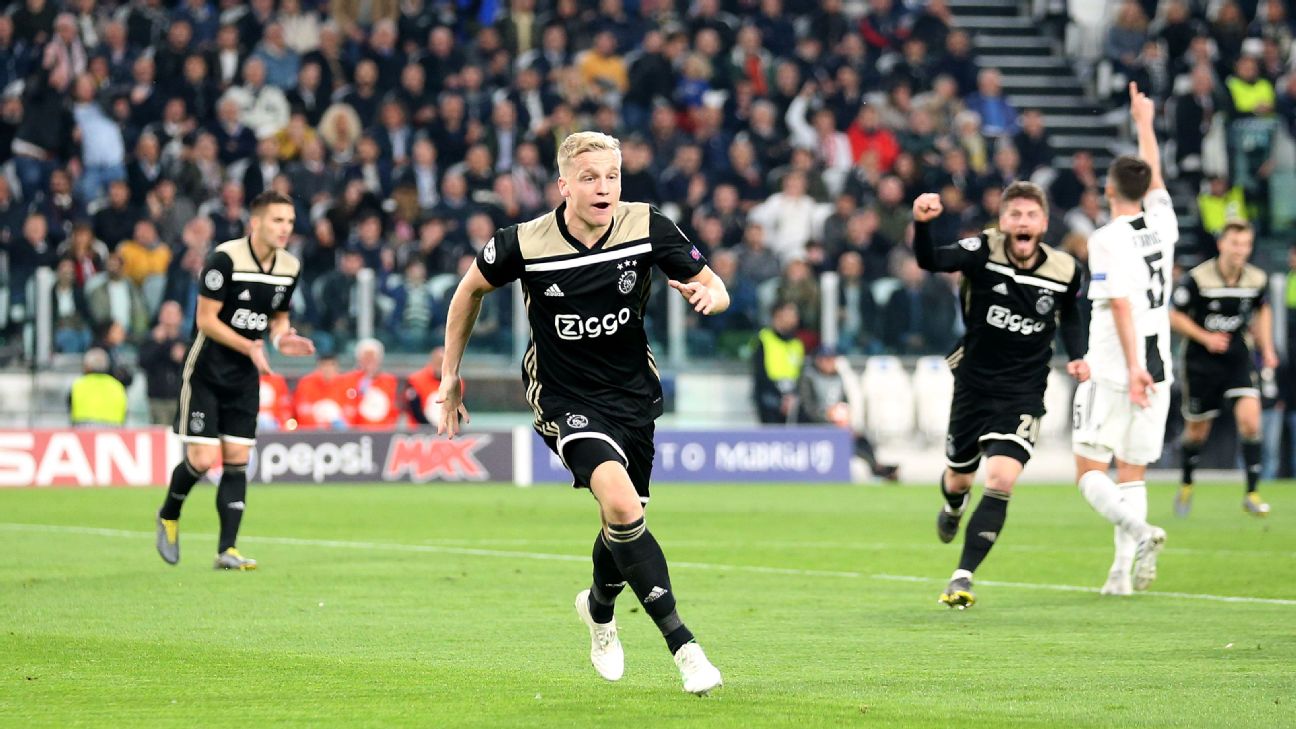 TOP STORY: Real turn to Van de Beek if they can’t get Pogba

Ajax are going to be torn to shreds this summer — possibly after winning the Champions League, of course. But with Frenkie de Jong already signed by Barcelona for €75m and Matthijs de Ligt close behind him, Marca report that Donny van de Beek is now on Real Madrid’s radar.

The paper claims: “It’s clear that Zinedine Zidane’s preferred option for the midfield is Paul Pogba, but other options are being considered by those upstairs at the Bernabeu, with the Frenchman having an extremely high salary that would distort the limit at Madrid.”

Sources told ESPN that Madrid won’t match the wages Pogba is on at United, so Van de Beek seems a good alternative.

He may be a ‘Plan B,’ but the midfielder would still cost around €60m and, as they always seem to be, PSG are also interested and have reportedly already begun talks.

22.54 BST: That’s going to bring Friday’s live edition of Transfer Talk to a close. Be sure to check back in a few short hours when we return with the latest gossip pulled from Saturday’s back pages.

21.45 BST: Get French Football cites L’Equipe as reporting that Manchester United have approached Lyon over the availability of former Celtic and Fulham striker Moussa Dembele, while adding that Atletico Madrid have also made contact and Arsenal are monitoring the 22-year-old Frenchman as well.

20.08 BST: Mundo Deportivo reports that those close to Neymar are convinced there is no chance of Paris Saint-Germain selling him this summer, but that there is a clause in his contract that would allow him to leave should a club bid €170m.

18.31 BST: Minnesota United confirmed on Friday that it has traded captain Francisco Calvo to the Chicago Fire in exchange for $400,000 in allocation money. Read the full story.

16.54 BST: Ahead of his side’s game against his former club Liverpool on Saturday, Newcastle boss Rafa Benitez has indicated that he is nearer to signing a new contract at St James’ Park. “I can say yes, it seems that things are at least moving forward and we will see if something is right at the end,” he told a news conference. “Maybe we are getting closer.”

16.30 BST: Birmingham’s star striker Che Adams is being strongly linked with Southampton, but Blues manager Garry Monk wants him to stay at St Andrews. “I can’t predict the future and we all know how football works and that side of it, but my No. 1 aim is to have our most important players and best players at the club,” he said.

15.51 BST: Norwich City defender Ivo Pinto will leave the newly-promoted club when his contract runs out at the end of next month. Pinto moved to Carrow Road from Dinamo Zagreb in 2016.

15.18 BST: Many predicted that midfielder Tom Cairney could be one of the players to leave following the club’s relegation to the Championship, but he has put pen to paper on a new deal until 2024. The Fulham captain scored the goal that beat Aston Villa in last season’s playoff final to win promotion.

14.38 BST: If there’s bad news above for Ajax fans, then here’s some good news about left-back Nicolas Tagliafico.

14.10 BST: Chelsea manager Maurizio Sarri has said the club are in ongoing talks with defender David Luiz, whose contract expires at the end of the season.

13.31 BST: Title contenders Liverpool and Manchester City have both been linked with Villarreal winger Samuel Chukwueze, and the Mail reports that the 19-year-old has said he wants to play in the Premier League.

12.40 BST: Borussia Dortmund sporting director Michael Zorc has responded to Thorgan Hazard‘s statement that he has agreed to join them from Borussia Monchengladbach, telling reporters: “I have not denied that.” Zorc said further statements would be made at the end of the season.

12.17 BST: Spurs manager Mauricio Pochettino has said the club must undergo a “painful” rebuilding exercise to get the team to the same level as their new stadium.

“When you talk about Tottenham, everyone says you have an amazing house but you need to put in the furniture,” he told a news conference. “If you want to have a lovely house, maybe you need better furniture. Now it’s about creating another chapter and to have the clear idea of how we are going to build that new project. We need to rebuild. It’s going to be painful.”

11.37 BST: Fernando Llorente has said he wants to stay at Tottenham, with his contract running out in the summer. The 34-year-old told Sky Sports: “I am at a great club with incredible players, and in the end the manager has to make decisions because only 11 players can play.

“I would love to stay for another year, but the truth is I am not thinking much about that right now. I believe the important thing at the moment is the team, not for individual players to think about themselves.”

11.03 BST: Liverpool winger Ryan Kent has sparkled on loan for Rangers, and Anfield legend Steven Gerrard, in charge at Ibrox, would like to make the move permanent. But he told a news conference: “He will have a big decision to make, as teams will be queuing up for his services. My advice to Ryan is to go where you will be happy.”

10.24 BST: Pretty much everyone is predicting a very busy summer at Manchester United, and the Manchester Evening News quotes boss Ole Gunnar Solskjaer explaining how things will work. “I’ll have the final say if a player comes in or goes out,” he said. “We’ve got regular meetings. I’m happy with the way it’s going. We’re supposed to sign 250 players, because you’re all writing about players we should sign, so hopefully we can get players in you have written about as well. So you never know.”

10.11 BST: To Germany, where both kicker and Bild have linked Bayer Leverkusen’s Julian Brandt with a move to Borussia Dortmund. Brandt has a €25m release clause in his contract.

09.30 BST: Leonardo Bonucci has told RAI that he never settled in Milan and was delighted to have the chance to go back to Juventus after a year. He said it was a “difficult time, but at the same time it was nice because it made me grow on a human level. Every journey ends with a return home.”

08.50 BST: James Rodriguez will return to Real Madrid this summer — but only temporarily, because the Colombia international will be transfer-listed, according to Marca.

James, 27, joined Bayern on a two-year loan from Madrid in 2017. The German club have a unilateral option to sign him until June 15 for a reported €42m but, according to Marca, will not do so as the relationship between him and coach Niko Kovac is not strong.

Marca claims the reason James will not stay at Madrid beyond this summer is because coach Zinadine Zidane is not counting on having him in his squad next season. James left Madrid having failed to earn a regular spot under Zidane.

08.00 BST: Manchester United are so desperate to see the back of Alexis Sanchez that they are willing to subsidise half of his £500,000-a-week wages for whichever club they can offload him to, according to the Daily Mail.

The newspaper reports that Sanchez — who earns up to £26 million a year, including bonuses — will be shipped out of Old Trafford to help fund an overhaul of Ole Gunnar Solskjaer’s squad just 18 months after arriving from Arsenal.

United would prefer to send him to a club outside the Premier League rather than potentially strengthen a domestic rival, and the preference would be for an initial loan deal with a view to a sale in the summer of 2020.

Sanchez, 30, still has three years to run on his contract at United.

Manchester United could enter a bidding war for Benfica’s Ruben Dias as they look to shore up their leaky defence.

Dias, 21, has already been targeted by Juventus but Portuguese newspaper Record reports that United have opened negotiations, although Benfica look set to demand that the €60 million release clause in his contract is met.

Time, however, is not on United’s side. Juve are understood to be in pole position to sign Dias, and the promise of Champions League football is a sizable carrot — and one United are unlikely to be able to offer.

Atletico Madrid are also reported to have been interested, but are now understood to be focusing on Porto defender Felipe instead.

Lala land? Arsenal and City both in the hunt for Strasbourg star

Arsenal and Manchester City are reportedly neck-and-neck in the chase for Strasbourg defender Kenny Lala.

Lala, 27, has shone in Ligue 1 and attracted the attention of some of the biggest names in European football. And while Arsenal looked to have a clear run this summer, City have rained on their parade.

French outlet le10sport reports that they are keen to bring Lala to the Etihad in the summer, with Pep Guardiola looking for another right-back.

Arsenal had been hoping to nab the player after a season that has seen Hector Bellerin out of action since through injury since January.

Lala has previously been linked with Newcastle, while Lazio have also been interested.

Manchester City full-back Danilo could be off to Inter Milan.

Gazzetta dello Sport, says the City defender has already agreed a “four to five year contract worth €3.5m a year.”

But there is no done deal yet, with City holding out for between €20m and €25m for a player who has spent more time on the bench than the pitch this season.

- Toronto FC are negotiating a deal with U.S. men’s national team defender Omar Gonzalez that could see him return to MLS, according to The Athletic.

– Could Fernando Torres be set for a final move before calling time on his career? According to AS Mexico, Torres could be set for one last hurrah with Atletico. No, not that one, Mexican outfit Athletic de San Luis.

– Former Spurs youth teamer Ruben Lameiras, currently at Plymouth, could be on his way to Ligue 1 side Bordeaux, says the Guardian.