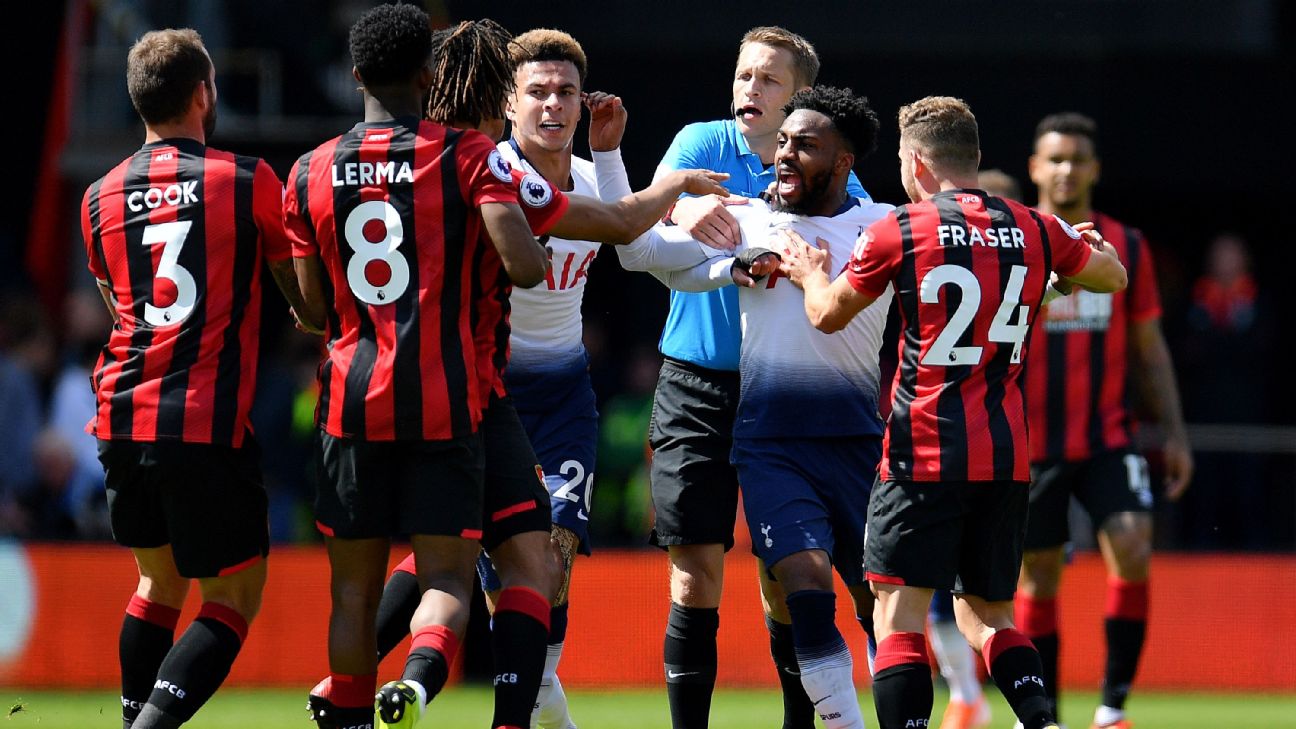 The strangest thing about nine-man Tottenham’s self-destruction in Saturday’s 1-0 defeat to Bournemouth was that it occurred in entirely unthreatening surroundings.

This was a lunchtime kick-off on a pleasant day at the Premier League’s smallest ground, and Tottenham were up against a Bournemouth side with little to play for.

The home side were in poor form, spent the prematch period handing out end-of-season awards and named a debutant goalkeeper so unknown he didn’t even have a Wikipedia page this morning. This should have been a stroll in the park.

Yet it was in this end-of-term spirit that Spurs completely lost their discipline and collapsed in a fashion that has become familiar to their fans at this stage of each season.

Tottenham coach Mauricio Pochettino said: “I think everyone saw the game, everyone can have their own opinion. It was live on TV, 12:30 p.m., I don’t need to explain too much, everyone saw on TV, everyone here saw what happened. That’s football.

The collapse, courtesy of Nathan Ake’s injury time winner, brings to mind the end of the 2015-16 campaign. Spurs were in with a chance of pipping Leicester to the Premier League title before falling to a draw at home to West Brom, infamously blowing a 2-0 lead away at Chelsea to mathematically end their title hopes — in a game featuring even more wild tackles than this one — then losing 2-1 at home to Southampton.

Then, finally, they were thrashed 5-1 by an already-relegated Newcastle side down to 10 men. Eventually, they suffered the ignominy of finishing behind rivals Arsenal.

Spurs have, in fairness, finished the last two campaigns relatively strongly, but this late-season slump feels familiar, and will inevitably be on their minds if they are challenging in the final weeks this time next season.

Tottenham are physically exhausted, still competing in two competitions with a threadbare squad and Harry Kane out injured. But this performance — and a third successive defeat to stretch their dismal run to one win in six — suggested a psychological frailty too.

Things started when Eric Dier, who has endured a dreadful period over the past year, got booked after just 10 minutes for fouling Ryan Fraser. Toby Alderweireld followed him into the book shortly after for cynically bringing down Josh King with a challenge that wasn’t so much wild, more deliberate — ensuring at least one of his legs made contact to halt a counter-attack.

Players on a yellow card generally show restraint and make fewer tackles, but not Dier. He stopped a Bournemouth break with a completely unnecessary lunge on King in the centre circle, which looked so obviously like a bookable offence that Bournemouth fans chanted “Off! Off! Off!’ for 10 seconds before realising referee Craig Pawson hadn’t even awarded a foul. Replays suggest Dier may have got his toe on the ball, but it was a remarkably risky tackle.

Dier was subsequently fortunate not to concede a penalty when his wild swipe inside the six-yard box missed the ball completely and flattened Callum Wilson, while Moussa Sissoko was beaten to a second ball by Ake and responded by bringing him down to become the third player in the book.

And then, shortly before half-time, Spurs were reduced to 10 when Son Heung-min — perhaps the last player you’d expect to be dismissed for violent conduct — responded to an altercation with Jefferson Lerma with a bit of a stamp and shove, and marched down the tunnel a minute before his teammates.

Pochettino couldn’t risk going down to nine. Therefore, he removed booked pair Dier and Alderweireld, which made sense. On came Victor Wanyama and Juan Foyth.

The problem, though, was that it took Foyth just two minutes before he launched into an absolutely ludicrous challenge on Jack Simpson — among stiff competition, the most obvious foul of the match.

For all Pochettino’s praise of his young compatriot, this was the second bizarrely ill-disciplined match of Foyth’s Premier League campaign: two penalties conceded at Wolves, and now a two-minute red card at Bournemouth.

“We needed fresh legs, and we needed to avoid another yellow card. But after three minutes, the plan didn’t work,” Pochettino said.

At nine against 11, the Spurs coach reshaped into a formation that is probably best expressed as a back four and a diamond midfield. They spent much of the second half simply chasing Bournemouth, who worked the ball from side to side without creating many goal-scoring chances.

For long periods it seemed Spurs would hold on to a clean sheet and the nine remaining players would be hailed as heroes but the physical exertions weren’t ideal preparation for their Champions League semifinal second leg away at Ajax on Wednesday, with the side 1-0 down on aggregate.

Things got even worse for Spurs as the game ticked into stoppage time, when Ryan Fraser’s in-swinging corner was powered home by Ake. It was another blow to Spurs’ chances of finishing in the top four, even if things will be in their own hands for the home clash with Everton next Sunday.

The real hero, though, was debutant goalkeeper Mark Travers, who would have been completely unfamiliar to many Bournemouth supporters on the morning of game but ended the game enjoying a lengthy ovation having been named the sponsors’ man of the match.

He made a series of fine saves — from a long-range Dele Alli effort he parried away, a smart top over when Lucas got in behind, and then a positive low stop when the Brazilian broke through for a one-on-one. There was also some smart sweeping as Spurs lofted balls in behind the Bournemouth defence.

“In the first half we dominated, we were so good on the pitch. When you look a the game, we played for 45 minutes with two players less than Bournemouth, and then at the end of the match, the man of the match was the keeper. When you think a little about that, you realise [that we played well],” Pochettino added.

Travers was the only Bournemouth player that can feel particularly proud of his efforts, as the home side were alarmingly feeble when attempting to break down Spurs’ nine men.

But Bournemouth collected the three points, while Spurs stumbled to another loss. Their only success since reaching the Champions League semifinals following that chaotic 4-3 defeat at Manchester City was the unconvincing late 1-0 win over Brighton, courtesy of Christian Eriksen‘s last-minute winner.

Spurs are still likely to re-qualify for the Champions League, but this is a squad running on empty and the extra energy exerted here because of the self-inflicted numerical disadvantage means a midweek comeback in Amsterdam will be even tougher.