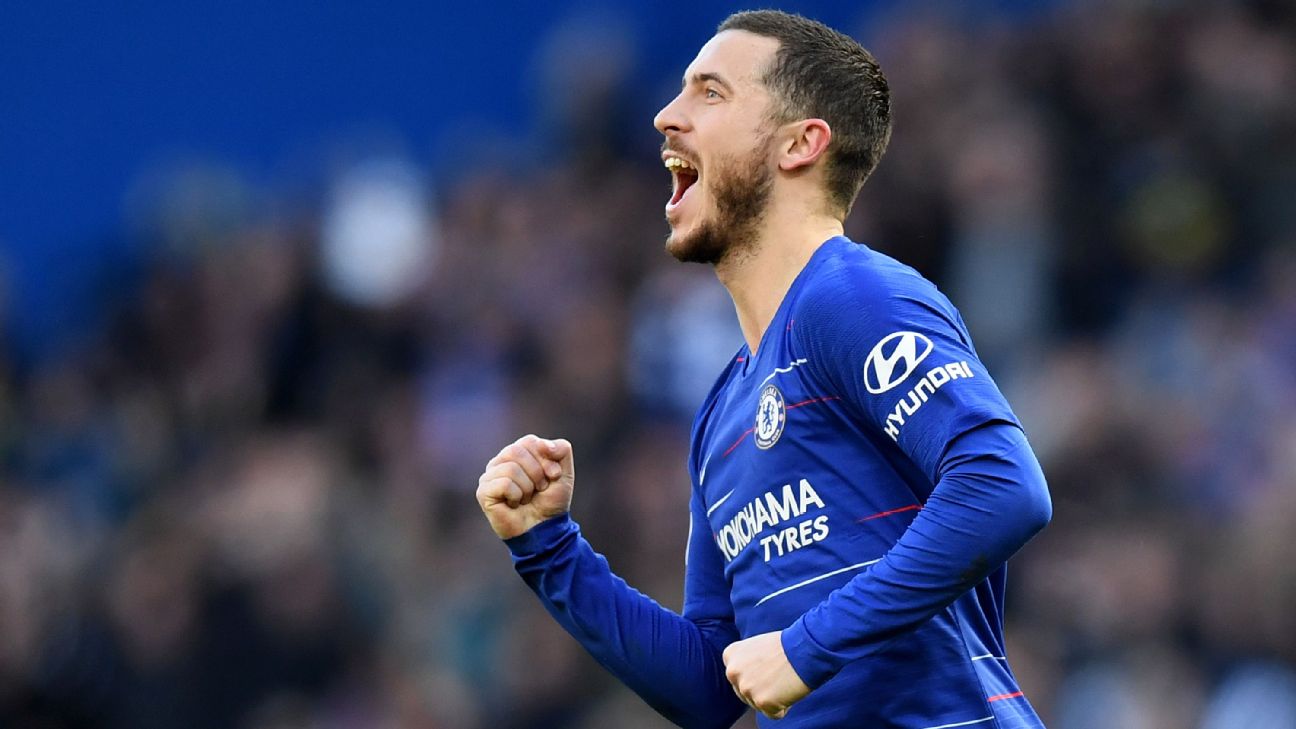 Once upon a time, when a club found its superstar player linked with a move to a bigger club, they used to repeat the same refrain: “We are not a selling club.”

It was always a particularly meaningless phrase; every club is a selling club at the right price, not least in this era of player power. It’s not even worth pretending anymore. When Barcelona are effectively forced to sell Neymar, and Real Madrid are effectively forced to sell Cristiano Ronaldo, even European football’s two big beasts are now selling clubs.

Those two remain at the top of the foodchain and have regularly signed English football’s best throughout the past decade: from Ronaldo to Luis Suarez, from Cesc Fabregas to Gareth Bale, from Luka Modric to Philippe Coutinho. If Barca and Real come calling, you don’t stand much chance of keeping a player.

– Hazard models Chelsea kit, but will he wear it?
– Pedro 8/10 to score vital away goal for Chelsea

The next in line, it seems, is Eden Hazard. Losing the Belgian would be a serious blow to Chelsea, not merely because of his huge contribution to the club’s attack — more on that later — but because Chelsea are genuinely not a selling club. It’s difficult to remember, in the Roman Abramovich era or even during the decade or so beforehand, Chelsea losing a key player against his will.

Sure, Chelsea have let go of big names, like Arjen Robben and Juan Mata, but that was because they didn’t fit into Jose Mourinho’s plans. They sold Kevin De Bruyne and Mohamed Salah too early, believing they had better options in their squad. And they’ve sold established title winners like Oscar and Thibaut Courtois, but few supporters were disappointed to see them leave.

However, at Stamford Bridge there’s been nothing close to Arsenal losing Fabregas, United losing Ronaldo, Liverpool losing Suarez or Spurs losing Bale. Those were their side’s outstanding individual, the player the attack was based around. Losing them forced the clubs to regroup, reformat their side and build again. All have managed it. If they lose another star, they can point to past experiences and move on.

To Chelsea, this is entirely unnatural. They, like Manchester City, have been all about incomings. Under Abramovich, Chelsea have generally signed players at roughly their peak age — or sometimes just as they’re starting to decline — which means their stars have departed in their mid-30s, when it was long overdue.

All this means it’s difficult to envisage how Chelsea would cope if Hazard, as expected, moves to Real Madrid this summer. There’s no culture at Chelsea of reinvesting in youth and building again. With uncertainty over the future of Maurizio Sarri, little emphasis upon promoting youth, a question mark about their recruitment policy after Michael Emenalo’s departure and an upcoming transfer ban, the departure of Hazard could prove more disastrous than the loss of the aforementioned players.

There’s a sense that Hazard remains underrated in the Premier League, especially considering his recent omission from the PFA Team of the Year. No Premier League player has recorded more assists than Hazard this season, and no one has dribbled past opponents more regularly. Only seven players have scored more goals.

That all-round quality is what makes Hazard so brilliant, and it also means he would be almost impossible to replace. Chelsea aren’t simply looking to replace goal-scoring potential, or creative quality, or trickery — they’d be looking for someone who could provide three different qualities in one. Statistically, it’s difficult to find anyone comparable from Europe’s major leagues, aside from Lionel Messi. Hazard’s departure would need to be compensated with the arrival of at least two standout attackers.

Chelsea seemingly can’t compete for Europe’s most coveted players anymore, so instead they’re being forced to look for the next big thing. Christian Pulisic will arrive in the summer and is clearly an outstanding talent. But Chelsea are not a club that possesses great patience, or a great track record of turning promise into consistent end product — even Hazard himself was miles ahead of Pulisic in terms of his development when he joined in 2012.

Hazard has been relatively consistent throughout the course of his Chelsea career — only 2015-16 has been a genuinely disappointing campaign — but Chelsea have never relied on him as much as this season.

Increasingly, Sarri’s tactics in the attacking third have gone out the window, and Chelsea’s attack has been based around getting the ball to Hazard, and getting him to do something remarkable.

Sarri hasn’t been able to choose between Alvaro Morata and Olivier Giroud — and now Gonzalo Higuain — and also has chopped and changed between Willian, Pedro and, more recently, Callum Hudson-Odoi. Is the most attacking midfield role played by Mateo Kovacic, Ross Barkley or Ruben Loftus-Cheek? There’s little consistency, little clear plan. Hazard is the only permanent attacker and has increasingly been forced to do it all by himself.

Of the dozens of different categories displayed by the statistics website WhoScored, perhaps the most intriguing is the column counting how many times each player has been man of the match. This is decided according to an algorithm, which is subjective, and there’s always an argument that football performance cannot be entirely represented by a lone number. But it’s nevertheless notable that Hazard has been deemed the best performer in 13 Premier League matches this season. No other player has held this honour more than eight times — accomplished by Salah and Raheem Sterling.

That doesn’t necessarily prove that Hazard has been better than Sterling or Salah; they’re competing for that honour with the likes of Sergio Aguero and Sadio Mane, so logically it’s harder for them to be the game’s outstanding player. But it reinforces the point that no other Premier League side rely on one player as much as Hazard.

When combined with the aforementioned sense that Chelsea simply aren’t accustomed to losing a star player and rebuilding, the sale of Hazard could be among the most significant in Premier League history, and might, for the time being, end Chelsea’s period as a consistent contender for major honours.