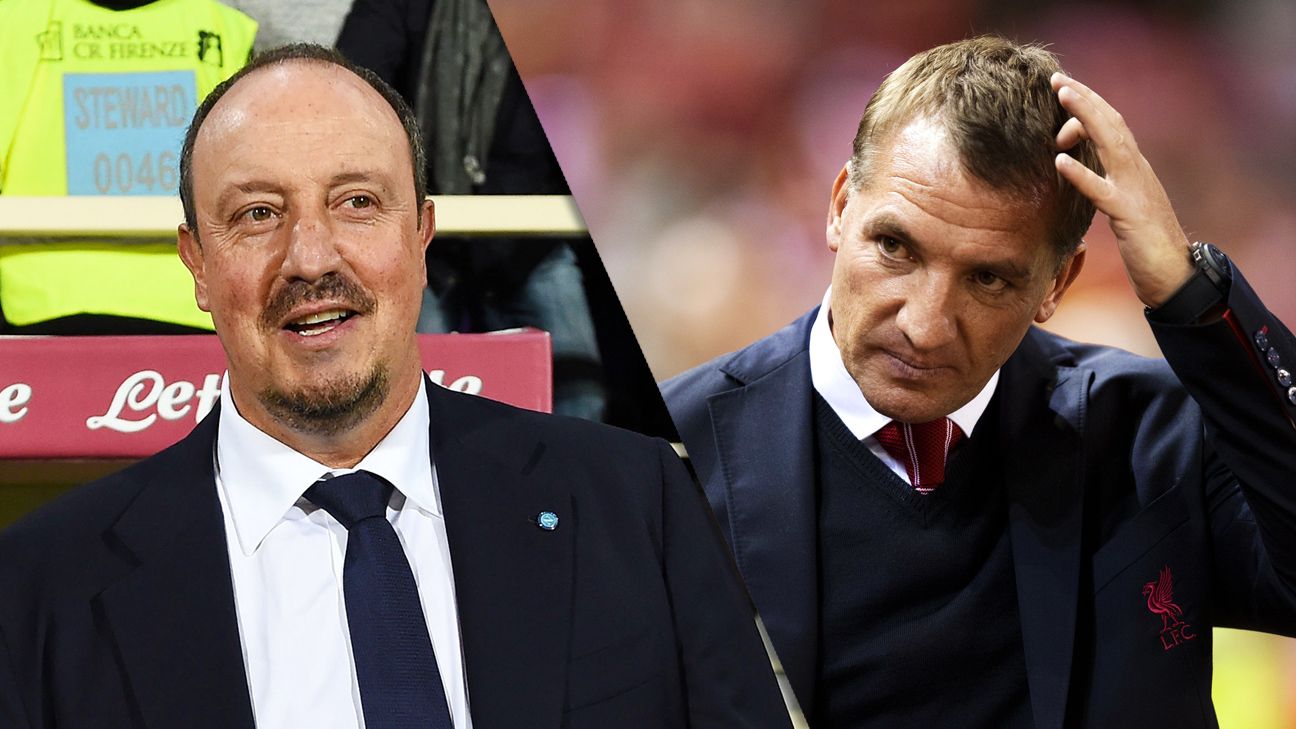 The next Liverpool manager to win the Premier League title will instantly earn legendary status at Anfield. Rafael Benitez almost did it 10 years ago, and Brendan Rodgers came within a Steven Gerrard slip of achieving it in 2014. Jurgen Klopp might be just over a week away from doing what Benitez and Rodgers were ultimately unable to, but the penultimate games of this season see his two recent predecessors handed a decisive role in either ending Liverpool’s title ambitions for another year or giving them the opportunity to beat Manchester City to top spot on the final day.

If Benitez’s Newcastle defeat Liverpool at St James’ Park on Saturday, City could clinch the title with a win at home to Rodgers’ Leicester on Monday. A draw for Benitez and co would virtually end Liverpool’s hopes as City would be three points clear with a healthy goal-difference advantage and just one game to go.

Even if things don’t go the Reds’ way this season and they don’t claim their first league title since 1989-90, their fingerprints will still be all over the trophy as it returns to Manchester.

– Wright Thompson: What a title would mean to Liverpool
– Ogden: Liverpool made Messi angry and paid the price
– Premier League sprint to the finish: All the info

However, if Liverpool claim all three points, City will face Leicester knowing that anything but a victory would leave Klopp’s men in pole position going into the final round of fixtures on May 12, when Liverpool host Wolves at Anfield and City travel to Brighton. The scenarios thrown up over the next few days offer a delicious late twist to the most compelling title race in years.

Benitez and Rodgers are both still held in high esteem by many Liverpool supporters — both have their detractors, too — so would surely not want to be the ones responsible for delivering the killer blow to Liverpool’s title ambitions. Though as driven professionals with their own points to prove at their respective clubs, it’s hard to know if they would also get a sense of satisfaction in deciding the title race and potentially denying Klopp.

It is a complex story for both Benitez and Rodgers, the two managers of Liverpool’s recent past who did the most to get the club back competing for the biggest honours.

Benitez is already regarded as an iconic figure in the eyes of the majority of Liverpool supporters, having guided the club to their fifth, and most recent, Champions League title in 2005, when his team fought back from 3-0 down at half-time against AC Milan to lift the trophy in Istanbul. The Spaniard’s image adorns flags on The Kop — alongside those of Bill Shankly, Bob Paisley, Joe Fagan and Kenny Dalglish — and his bond with the supporters has remained firm despite his sacking in 2010. His family’s home is still near Liverpool, the same place he lived when he was the Reds’ manager, and he has attended several Hillsborough memorials in the years since leaving.

In 2008-09, Benitez came within a whisker of winning the title, before Liverpool ended up four points adrift of champions Manchester United. But that team of Gerrard, Fernando Torres and Xabi Alonso was arguably as exciting and formidable as the one that Klopp has built this season.

Benitez is well aware of his status among the Liverpool fan base, so he could be conflicted if his Newcastle team snuffs out his old club’s title hopes. But he is also aware of his presence on those flags, as Liverpool’s last major title-winning manager, so there may also be an element inside him that does not want to help elevate Klopp to a higher echelon. Speaking in his Monday news conference, he made it clear: “It’s my responsibility to look after Newcastle and if I was on the other side, I would be expecting the opposition to do their best and the manager to try his best.

“You have to remember that all the teams have 38 games to do what they want to do.”

It is a different story, and a different situation, for Rodgers. The Northern Irishman could have secured a job for life at Liverpool had his team got over the line in 2014, but Gerrard’s slip to let Demba Ba score in a 2-0 defeat against Chelsea proved the crucial switch of momentum that enabled City to claim the title by two points.

History has judged Rodgers harshly, and often with ridicule — his beatific presence in the “Being Liverpool” documentary, in particular, made him a target for cruel memes — but he also built an outstanding team at Anfield with Luis Suarez the controversial star. Rodgers’ work was pivotal in dragging Liverpool out of their post-Benitez slump and giving the club and supporters renewed belief that success could return. He was sacked in October 2015 and replaced by Klopp, but while a positive result for Leicester at City on Monday would help give his successor a lift onto the pedestal being prepared for him, it might also provide redemption for Rodgers and show his critics that he’s worthy of respect at the highest level.

Rodgers had to move to Celtic, after a year off, to prove his ability to win at a big club, but at Leicester he will be focused on proving people wrong in the years ahead. Monday would certainly be the perfect time for him to start: with six wins, two defeats and one draw since Rodgers took over on Feb. 26, he certainly has shown he can motivate and shape a Leicester squad that managed just one league victory prior to his arrival. He’s also refusing to act like his Foxes side will aid his former club in their path to glory.

“I haven’t given [facing Man City] a great deal of thought,” Rodgers said prior to last weekend’s 3-0 win over Arsenal. “My job is to do Leicester a favour. Every game is important. Our only concern is ourselves.”

Deep down, both Benitez and Rodgers forged positive connections with Liverpool that will outshine the negative, so it is difficult to imagine either of them wanting their old club to fail. But there will be an element of it, no matter what is said in public. Whatever happens, though, you can be certain that one of Klopp’s predecessors will get to play a significant hand in the outcome of this season’s title race.