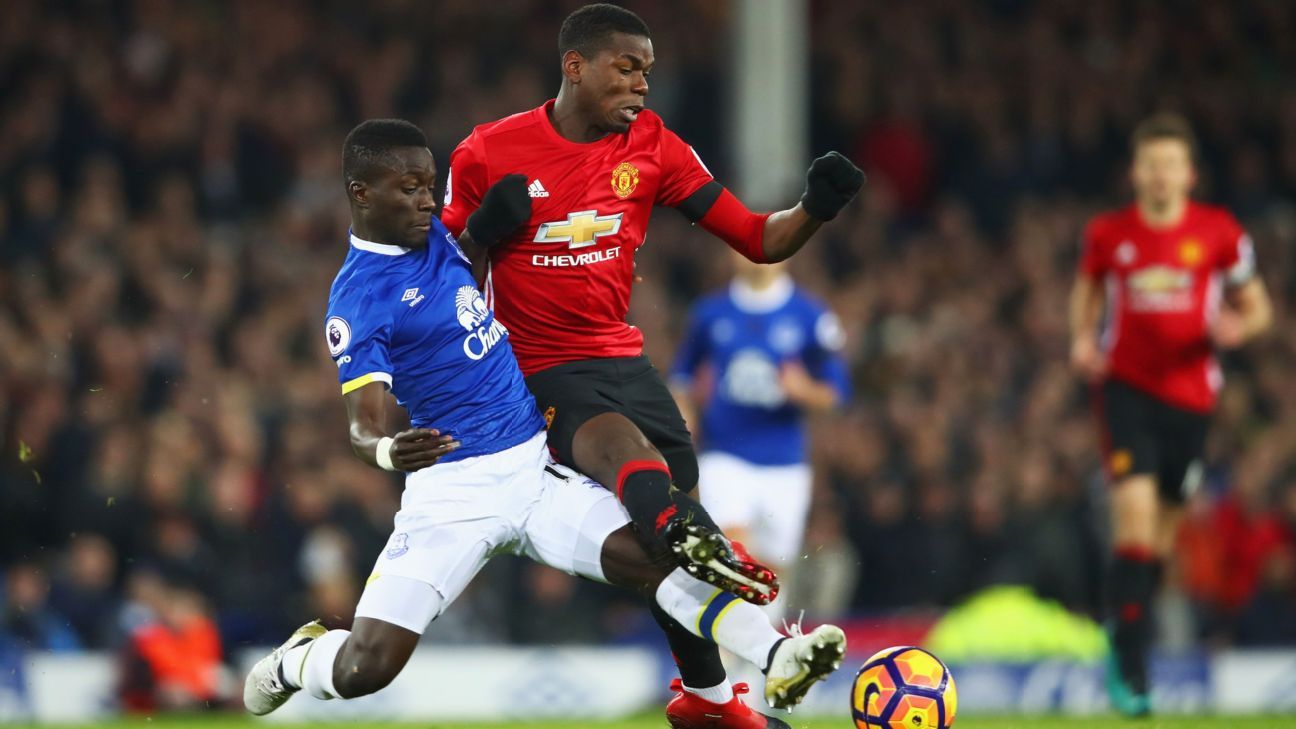 “Manchester United have stepped up their pursuit of Portuguese duo Joao Felix and Bruno Fernandes,” say the Evening Standard, which is all very well but there’s another player hidden inside the story who didn’t make the headline but could be even more important if they do land him.

That player is Everton’s Idrissa Gueye who is evidently being lined up to replace Ander Herrera when he departs this summer.

Gueye almost joined PSG in January and has made it quite clear that he’s keen to move on from Everton, while United are in need of a midfield presence after spending £52m on Fred and not getting much of a return on that investment.

While Gueye has the most tackles in the Premier League (126), he will also showcase his talents for Senegal at the African Nations Cup this summer, so United better move fast unless they want his price to go even higher.

11.07 BST: Have you been wondering what former Huddersfield manager David Wagner has been up to since he left to take a break from management in January? No, us neither, but the Daily Mirror say that he has agreed to become Schalke’s new boss this summer.

Domenico Tedesco was sacked in March and Huub Stevens took over, but the club are only just sitting outside the relegation spots in 15th place so need a change. Enter Jurgen Klopp 2.0.

10.35 BST: Chelsea have unveiled their new home kit for the 2019-20 season, and, in the most polite phrasing possible, it’s likely to split opinion.

It’s blue — no major surprise there — but it’s also covered in a motif reminiscent of that which you’d see on the seats of the London bus than runs past Stamford Bridge.

Eden Hazard has been charged with modelling the new shirt — along with teammates Cesar Azpilicueta and Ethan Ampadu — though there’s a strong chance it might be enough to finally convince him to make the leap to Real Madrid.

It makes sense, given that Real don’t seem to want him around anymore and are targeting a big spending spree this summer, but would Bale want to play second fiddle to Neymar and Kylian Mbappe? Or would he be better off finding somewhere where he can be the leading light again?

09.55 BST: Celtic have taken up their option to hand winger Scott Sinclair a one-year contract extension.

Manager Neil Lennon told a news conference: ”Scotty will be here for another year. He has returned a lot of goals for us this season yet again and it’s a big boost for the squad.”

09.26 BST: This is a slightly odd one but Gazzetta dello Sport report there could be a possible swap deal between Roma’s Edin Dzeko and PSG’s Edinson Cavani.

The logic behind it being that Thomas Tuchel doesn’t like Cavani and wants a decent backup striker, with all the focus to be placed firmly on Kylian Mbappe up front. Roma, for their part, need to reduce their wage bill and Cavani earns more than Dzeko, so this one seems like a non-starter.

08.50 BST: Barcelona target Luka Jovic is “the hottest property in Europe at the moment,” Eintracht Frankfurt’s sporting director has told ESPN. Jovic, 21, will line up against Chelsea this evening in the first leg of their Europa League semifinal, and he does so having scored 25 goals in 43 games in all competitions so far this season.

Sources have told ESPN that Barcelona have watched the Serbia international over 20 times but will face stern competition from Bayern Munich. And Frankfurt chief Fredi Bobic is not afraid to talk up the value of his star striker, telling ESPN’s Raphael Honigstein: “He’s definitely the hottest property in Europe at the moment, considering his age and position. There’s no point in denying that.

“But we have a great relationship. He’s really happy there, and he’s very grateful. That’s the truth. He has had the chance to mature as a man and as a pro here, to put in performances that can still get much better.

“There is chance he might stay for one more year. But if a really big club turns up, willing to put in a bid that reflects the player’s value, it will be impossible to keep him because of the wages on offer. You can’t stop a player from making such a big dream come true.”

08.00 BST: Mesut Ozil has insisted that he has no plans to leave Arsenal this summer, despite being dropped several times this season and coming under fire from Gunners fans.

The 30-year-old still has over two years remaining on his contract at the Emirates, and is the club’s highest earner. It has been reported that, despite his return to the first-team fold after a spell being frozen out by coach Unai Emery will look to sell Ozil in the summer in order to help finance an overhaul of the squad.

Asked if he wants to stay, the former Real Madrid playmaker told Sky Sports: “Absolutely. I’ve got two more years on my contract. I don’t know after that but I’ve got two years left.”

Asked if he is happy, he said: “Yes. Why not? I’m 30 now, still got years in front of me, it’s down to the club as well of course, but I’ve got two years here – after that I don’t know what happens.”

Poch to get chance to spend in summer

Tottenham manager Mauricio Pochettino will finally be expected to wheel and deal in the transfer market this summer, with The Telegraph claiming chairman Daniel Levy will not sanction more than two or three major signings.

Spurs are expected to beat Everton to the signature of Barcelona midfielder Andre Gomes for around £30 million, despite the Portugal international spending the season on loan at the Toffees. Meanwhile, Pochettino is also keen on Nice full-back Youcef Atal, who would cost in the region of £34m.

The signing of an English player will also be on the north Londoners’ agenda as they look to stay in line with the Premier League’s strict homegrown quota rules. Fulham winger Ryan Sessegnon and Jack Grealish of Aston Villa are long-term targets, and are still believed to be on the Spurs’ shopping list.

Tuttosport claims PSG contract rebel Adrien Rabiot is the next free agent on the wish list of Juventus.

The Frenchman has refused to sign a new deal at Les Parc des Princes, meaning he has the pick of a number of top European clubs chasing his signature, but the Italian publication believes the Serie A champions are first in line for the 24-year-old, who they have attempted to sign several times in the past.

The Bianconeri have begun their summer revamp early, having already tied down Arsenal midfielder Aaron Ramsey to a big-money deal, and Rabiot looks set to become the second free transfer of their summer, as boss Massimiliano Allegri reshapes his midfield following a disappointing quarterfinal exit in the Champions League.

Atletico Madrid defender Filipe Luis could remain at the Wanda Metropolitano, despite months of speculation regarding the Brazilian’s future in the Spanish capital.

Marca claims talks between the club and the player’s agent Jorge Mendes are to take place in a matter of days, with an agreement that will see the player stay at the club for another season now appearing the most likely outcome.

The Brazilian will turn 34 before the start of the new La Liga season, and Atletico’s policy of not offering players over 30 long-term deals had left Luis frustrated and on the verge of a switch to Paris Saint-Germain last year.

But that move failed to materialise, and fellow full-back Lucas Hernandez‘s impending move to Bayern Munich means that the former Chelsea man can expect more regular minutes if he is to remain in Spain.

– Former Real Madrid youngster Jese Rodriguez’s search for a new home is set to continue, with Marca claiming Real Betis will not be taking up the option to sign the 26-year-old on a permanent basis. The Spaniard’s latest loan spell is his third in as many years, after signing for PSG in 2016.

– Stoke midfielder Charlie Adam has confirmed he will leave Stoke City this summer after seven years at the club, reports the Daily Mail. Fellow midfielder Darren Fletcher will also be departing Staffordshire, along with goalkeeper Jakob Haugaard.