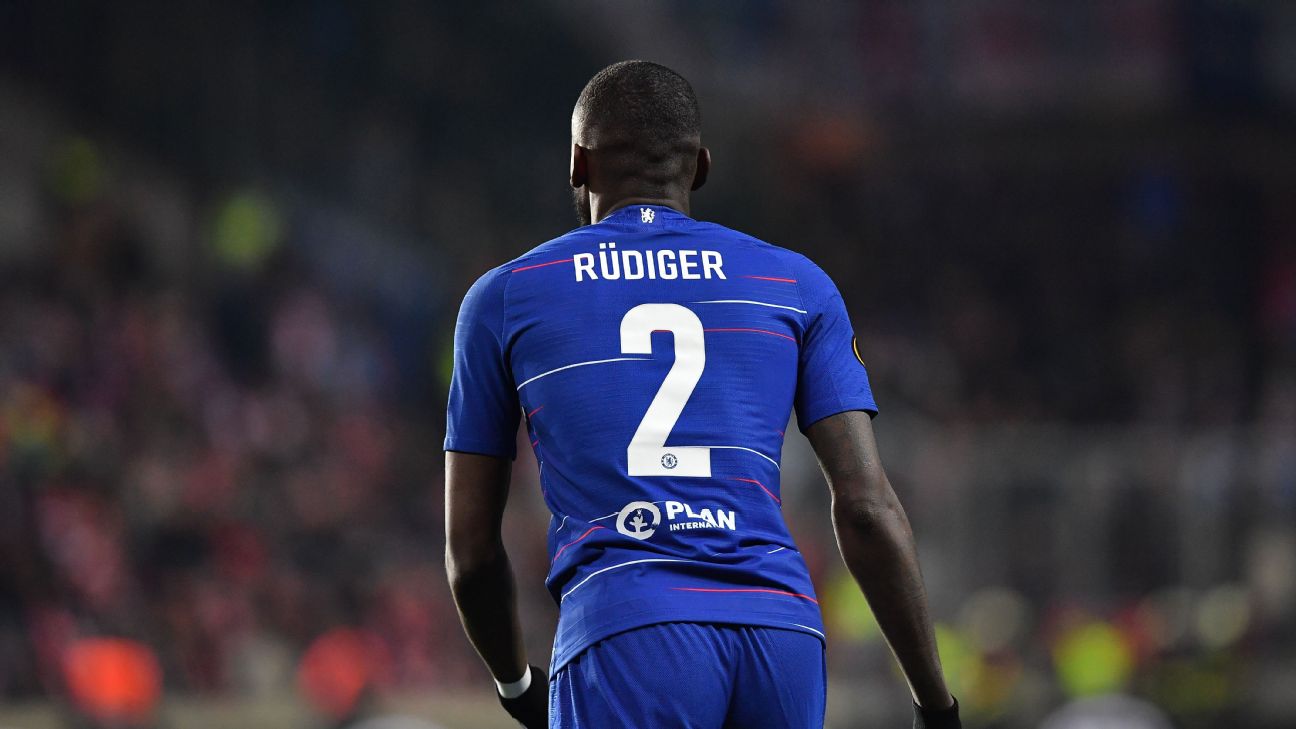 FRANKFURT, Germany — Maurizio Sarri admitted that he is worried about Chelsea’s defensive crisis after Antonio Rudiger’s season-ending knee injury left him to face Eintracht Frankfurt with only two fit centre-backs.

Rudiger underwent surgery on his meniscus this week after limping out of Chelsea’s 1-1 draw with Manchester United on Sunday, and Sarri confirmed that he expects the Germany international to be sidelined for at least three months.

Andreas Christensen will partner David Luiz at the heart of Chelsea’s defence for the first leg of their Europa League semifinal against Eintracht on Thursday, but Gary Cahill also sat out the trip to Germany with an Achilles tendon problem, leading Sarri to trial Cesar Azpilicueta at centre-back in recent training sessions.

“Cahill is out,” Sarri revealed when asked about his club captain, who has not made a first-team appearance since November. “It’s a medical problem to his Achilles tendon, so he’s out. He’s out at the moment and I hope to recover him in one week, but I don’t know at the moment.

“But he is out from… starting four or five days ago. So we are in trouble with the centre-backs. In the last two training sessions, we played with Azpilicueta as a centre-back in case. I think he’s the only one who can play there.

“We’ve played 58 matches and in the past we were lucky with injuries. In the last 10 days, not so lucky.”

Asked if he is worried about Chelsea’s shortage of centre-back options for the final stretch of the season, Sarri replied: “A little.”

Azpilicueta was deployed as a central defender by Sarri’s predecessor Antonio Conte to great success for two seasons at Chelsea, and the Spaniard is confident that he can do a solid job there again if required.

“I’m ready to play wherever the manager asks me to play,” he insisted. “I’ve played centre-back for Chelsea and the national team.

“It’s true, the last couple of months I’ve played at right-back or left-back, a few times, but I can adapt to different positions. I enjoy whatever the manager thinks is useful for the team. I’m ready for whatever.”

Rudiger made a surprise return against United just 14 days after his knee injury first surfaced against Liverpool last month, and Sarri revealed that his defender tried to play through the pain despite knowing the issue would require surgery.

“He was unlucky, but the situation without or with the match was the same. At the end of the season, he would have to have the surgery.”

Rudiger’s absence means Sarri will now be forced to lean heavily on Christensen for the decisive matches of Chelsea’s season in the Premier League and Europa League, and he is confident the Dane will prove equal to the moment.

“Christensen has played about 25 matches during the season, so he is ready,” Sarri said. “I hope he will be very fresh, mentally and physically, but I’m sure he’s ready to play in every match.

Follow live: Hosts Qatar meet Ecuador as World Cup kicks off
How the US respond to Wales draw will determine their World Cup fate
US dominant in draw with England at World Cup
The inside story of how USMNT star Musah could have played for England
Ecuador fans ‘want beer’; Qatar’s exit loss early