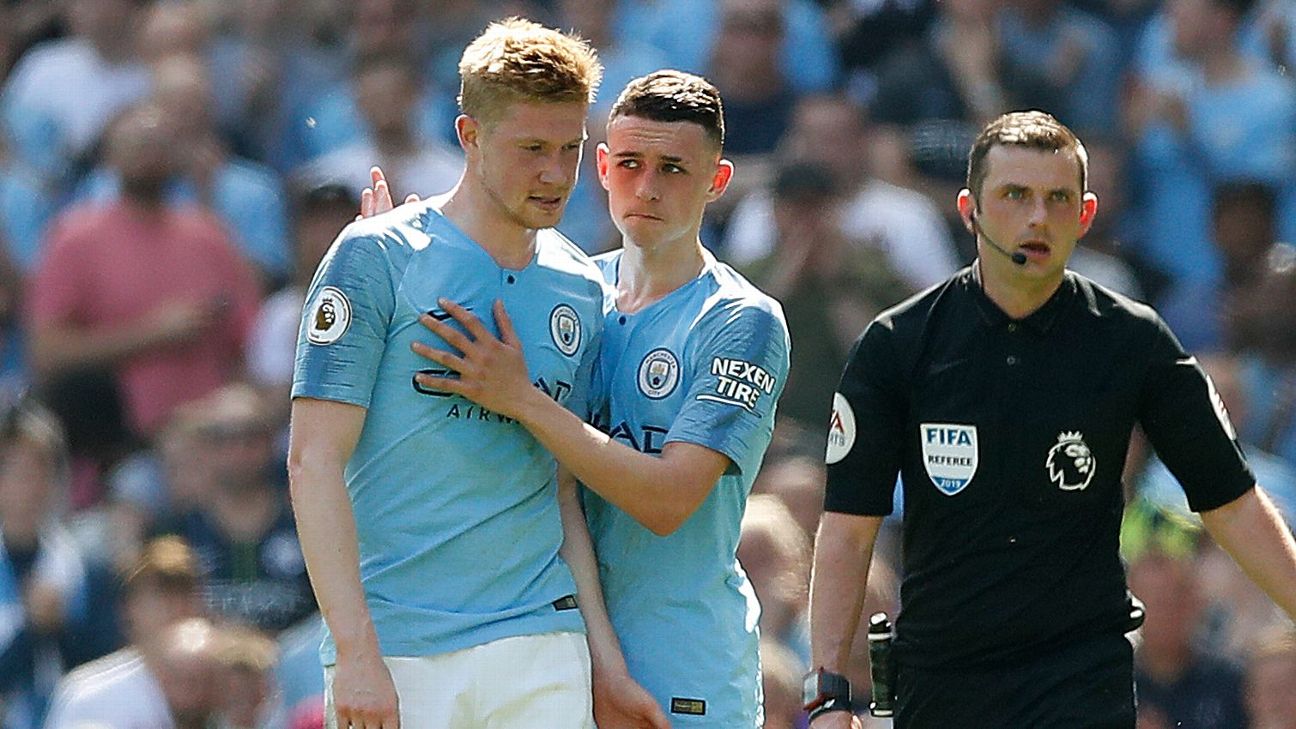 Kevin De Bruyne said he has no sympathy for Liverpool after Manchester City pipped them to the Premier League title by just a point because they were the better team in the end.

Liverpool lost just one match all season to finish on 97 points — the highest total ever by a runner-up and a figure that would have been enough to win the title in all-but three Premier League seasons.

But they lost out to City after a 14-game winning streak to finish the season and De Bruyne says it shows they were better than Jurgen Klopp’s side.

“It’s a remarkable effort [from Liverpool], but it means that we were just better than them in the end,” De Bruyne told reporters. “I don’t feel sorry for them, because I don’t think they’d feel sorry for us.

“I don’t think anybody felt sorry about the way we went out of the Champions League. You take it. I know how they feel, because you’re going to feel disappointed. We’d feel the same if it happened to us. But we’re still competitors. We want to win as much as they do, but I can understand the feelings they have.

– When is the FA Cup final?
– Who qualifies for Europe from the Premier League?

“It’s the general view of athletes. You feel compassionate with other teams, but in the end the most important thing is, if you play an individual sport, it’s yourself, and when it’s your team, it’s your team. It’s been a great battle. But to feel ‘sorry’ for them is maybe going a little too far.”

City boss Pep Guardiola described their exit as “cruel” after Raheem Sterling‘s injury-time winner against Tottenham was ruled out after a review by the video assistant referee.

That ended City’s hopes of winning a Quadruple although they can complete a domestic Treble at Wembley by beating Watford in the FA Cup final on Saturday (live on ESPN+ at noon ET) after also winning the Carabao Cup earlier in the season.

Sterling grew up just a few miles away from Wembley and is desperate to win his first FA Cup winners’ medal.

“To be in the final, that’s massive and people might say it’s just another cup, but for us to be in the final is a massive achievement,” Sterling said. “There’s been many a year we have tried, and we’ve not been able to get there and this year we’ve got there.

“We just need to be positive going into it and try to win it. It’s a beautiful trophy and it’s a trophy that I’ve never touched and hopefully I can walk up those stairs and get my hands on it.

“We’ve got a long way to go and we know how difficult it will be against a really tough Watford team, but it’s a challenge we’re up for.”

Meanwhile, Guardiola said he wants Leroy Sane to stay at Manchester City but says the German winger, whose starts were limited during the team’s stretch run, is no closer to signing a new contract.

Bayern Munich have been linked with a summer move for Sane, 23, who has two years remaining on his current contract.

Sources told ESPN FC that Sane was close to signing a new deal in March but he has started just three Premier League games since, although Guardiola insists he wants him to remain and fight for a starting place.

“We have been one-and-a-half years trying to [get him to] sign his [new] contract, we want him,” Guardiola told a news conference ahead of the FA Cup final against Watford.

“[He’s not playing] because he’s competing with Raheem Sterling and Bernardo Silva. It’s not easy. If you want to play in for competitions for the quadruple we need Leroy, Sterling, Riyad [Mahrez], Bernardo, we can’t compete for the quadruple with just two wingers.

“They have to fight each other and play the best as possible to convince me to put them in the lineup.”

But with the contract remaining unsigned, Guardiola refused to confirm that Sane will still be at the club next season.

Vincent Kompany‘s future is even more uncertain with the City captain’s contract running out at the end of the season.

“Hopefully not,” Guardiola said when asked if it will be his last game. “We spoke with Vinny and we are going to speak after this game. But my words are unnecessary for what he has done over the last few weeks and his career.

“Vinny has shown again when he is fit what he is able to do. It is top. The problem is the period between November and February and March. We were losing quite often for that reason. When he is fit he is incredible.”